Stocks Settle Down After Big Swings on Ukraine 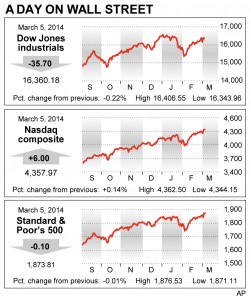 Calm returned to the stock market Wednesday after two days of volatile trading.

The Standard & Poor’s 500 index traded within a range of about five points, or about a quarter of a percentage point for the whole day, before ending a fraction lower. Investors weighed a tepid hiring survey, some strong company earnings and falling oil prices.

Stocks plunged Monday, then surged to a record high on Tuesday as tensions in Ukraine flared, then eased.

“We’re returning to normality,” said John Manley, chief equity strategist at Wells Fargo Fund Management. “What the market now trades on is fundamentals, and the fundamentals are still good.”

Manley expects the rally to remain intact as long as the Federal Reserve keeps up its support of the economy and companies can keep increasing their earnings.

The Fed is buying $65 billion worth of bonds every month and isn’t expected to raise short-term interest rates any time soon. Company earnings are forecast to climb 8.1 percent in the fourth quarter to a record $28.49 per share for S&P 500 companies, according to S&P Capital IQ.

Energy stocks were the biggest losers Wednesday. They fell after the price of oil dropped for a second day as tensions eased in Ukraine and the threat of economic sanctions against Russia appeared to recede.

Exxon Mobil fell $2.72, or 2.8 percent, to $93.80, making it one of the biggest decliners in the S&P 500. The company said it planned to cut its capital spending by 6 percent this year and that its production will rise 2 percent.

Stocks started the day fluctuating between small gains and small losses after a tepid report on hiring. Payroll processor ADP said Wednesday that businesses added 139,000 jobs in February, up from 127,000 the month before, however January’s figure was revised sharply lower from an original estimate of 175,000.

The ADP numbers cover only private businesses and often differ from the government’s more comprehensive survey of the U.S. employment market. The Department of Labor releases its monthly report Friday. Economists believe the U.S. will report that employers generated 145,000 jobs in February.

Stocks have rebounded to record levels this month, despite a series of weak economic reports, as investors remain confident that the economy will strengthen once an unusually cold winter has passed.

“You would hope that there will be some pent-up demand that wasn’t satisfied, whether it’s consumers, or business activity that didn’t get done, during these bad winter months,” said Colleen Supran, a principal at San Francisco-based Bingham, Osborn & Scarborough. “Maybe that will help earnings.”

Among the winning stocks on Wednesday were Brown-Forman, the maker of Jack Daniel’s Whiskey, and video game retailer GameStop.

This article appeared in print on page 8 of the March 6th, 2014 edition of Hamodia.