Putin Softens His Rhetoric on Ukraine

Stepping back from the brink of war, Vladimir Putin talked tough but cooled tensions in the Ukraine crisis in his first comments since its president fled, saying Tuesday that Russia has no intention “to fight the Ukrainian people,” but reserved the right to use force.

As the Russian president held court in his personal residence, Secretary of State John Kerry met with Kiev’s fledgling government,  and Moscow agreed to sit down with NATO.

Although nerves remained on edge in Crimea, with Russian troops firing warning shots to ward off Ukrainian soldiers, global markets catapulted higher on tentative signals that the Kremlin was not seeking to escalate the conflict. Kerry brought moral support and a $1 billion aid package to a Ukraine fighting to fend off bankruptcy.

Lounging in an armchair before Russian tricolor flags, Putin delivered a characteristic performance filled with earthy language, macho boastfulness and sarcastic jibes, accusing the West of promoting an “unconstitutional coup” in Ukraine. At one point he compared the U.S. role to an experiment with “lab rats.”

But the overall message appeared to be one of de-escalation. “It seems to me [Ukraine] is gradually stabilizing,” Putin said. “We have no enemies in Ukraine. Ukraine is a friendly state.”

He tempered those comments by warning that Russia was willing to use “all means at our disposal” to protect ethnic Russians in the country.

Significantly, Russia agreed to a NATO request to hold a special meeting to discuss Ukraine on Wednesday in Brussels, opening up a possible diplomatic channel in a conflict that still holds monumental hazards and uncertainties.

While the threat of military confrontation retreated somewhat Tuesday, both sides ramped up economic feuding in their struggle over Ukraine. Russia hit its nearly broke neighbor with a termination of discounts on natural gas, while the U.S. announced a $1 billion aid package in energy subsidies to Ukraine.

Ukraine’s finance minister, who has said Ukraine needs $35billion to get through this year and next, was meeting Tuesday with officials from the International Monetary Fund.

Russia took over the strategic peninsula of Crimea on Saturday, placing its troops around its ferry, military bases and border posts. Two Ukrainian warships remained anchored in the Crimean port of Sevastopol, blocked from leaving by Russian ships.

“Those unknown people without insignia who have seized administrative buildings and airports … what we are seeing is a kind of velvet invasion,” said Russian military analyst Alexander Golts.

The territory’s enduring volatility was put in stark relief Tuesday morning: Russian troops, who had taken control of the Belbek air base, fired warning shots into the air as some 300 Ukrainian soldiers, who previously manned the airfield, demanded their jobs back.

The Ukrainian troops pledged to hold whatever ground they had left on the Belbek base.

“We are worried. But we will not give up our base,” said Capt. Nikolai Syomko, an air force radio electrician holding an AK47. He said the soldiers felt they were being held hostage, caught between Russia and Ukraine. There were no other reports of significant armed confrontations Tuesday in Ukraine.

Amid the tensions, the Russian military on Tuesday test-fired a Topol intercontinental ballistic missile. The missile, fired from a launch pad in southern Russia, hit a designated target on a range leased by Russia from Kazakhstan.

The new Ukrainian leadership in Kiev, which Putin does not recognize, has accused Moscow of a military invasion in Crimea, which the Russian leader denied.

Ukraine’s prime minister expressed hope Tuesday that a negotiated solution could be found. Arseniy Yatsenyuk told a news conference that both governments were talking again, albeit slowly.

“We hope that Russia will understand its responsibility in destabilizing the security situation in Europe, that Russia will realize that Ukraine is an independent state and that Russian troops will leave the territory of Ukraine,” he said.

In his hour-long meeting with reporters Tuesday, Putin said Russia had no intention of annexing Crimea, while insisting its residents have the right to determine the region’s status in a referendum later this month. Crimean tensions, Putin said, “have been settled.”

He said massive military maneuvers Russia has conducted involving 150,000 troops near Ukraine’s border were previously planned and were unrelated to the current situation in Ukraine. Russia announced that Putin had ordered the troops back to their bases.

Putin hammered away at his message that the West was to blame for Ukraine’s turmoil, saying its actions were driving Ukraine into anarchy. He warned that any sanctions the United States and European Union place on Russia for its actions will backfire.

Moscow has insisted that the Russian military deployment in Crimea has remained within the limits set by a bilateral agreement concerning Russia’s Black Sea Fleet military base there. At the United Nations, Russia’s ambassador to the U.N., Vitaly Churkin, said Russia was entitled to deploy up to 25,000 troops in Crimea under that agreement.

The Russian president also asserted that Ukraine’s 22,000-strong force in Crimea had dissolved and its arsenals had fallen under the control of the local government. He didn’t explain if that meant the Ukrainian soldiers had just left their posts or if they had switched allegiance from Kiev to the local pro-Russian government.

Putin accused the West of using fugitive President Viktor Yanukovych’s decision in November to ditch a pact with the EU in favor of closer ties with Russia to fan the protests that drove him from power and plunged Ukraine into turmoil. 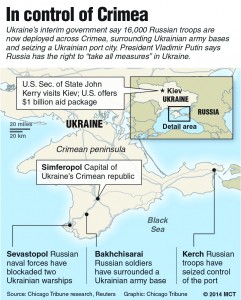 “I have told them a thousand times ‘Why are you splitting the country?’” he said.

While he said he still considers Yanukovych to be Ukraine’s legitimate president, he acknowledged that the fallen leader has no political future — and said Russia gave him shelter only to save his life. Ukraine’s new government wants to put Yanukovych on trial for the deaths of over 80 people during protests last month in Kiev.

Putin had withering words for Yanukovych, with whom he has never been close.

Asked if he harbors any sympathy for the fugitive president, Putin replied that he has “quite opposite feelings.”

This article appeared in print on page 1 of the March 5th, 2014 edition of Hamodia.