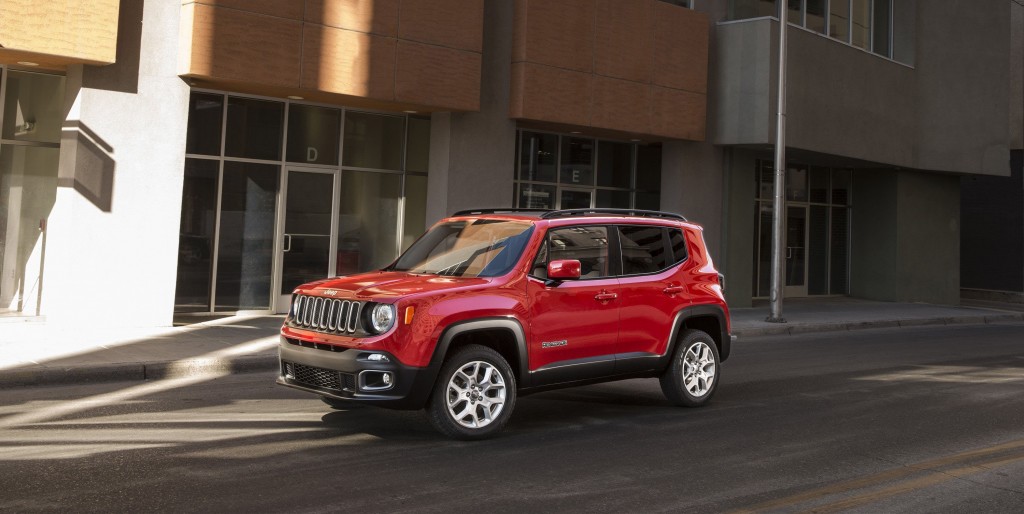 As the first of its kind, the Jeep Renegade, a smaller, tough Italian cousin to the Wrangler, has already been called the “cute brute” and “baby Jeep” of the Chrysler lineup.

The brand’s first subcompact SUV and the first Jeep model to be made in Italy is expected to juice global growth as it delivers a big sales punch to Chrysler’s already-prosperous U.S. lineup.

The Renegade, which is to go on sale before the end of the year, was unveiled Tuesday at the Geneva Motor Show in Switzerland.

“I think it’s fantastic. It’s exactly what the baby Jeep should be,” said Aaron Bragman, Detroit bureau chief of Cars.com, a web-based car-shopping site. “To me, it is something we don’t have yet in this market. It is a really small, trucky-looking vehicle.”

With the small crossover, Chrysler is leaping into one of the fastest-growing segments in the world. The strategy shows how Fiat Chrysler CEO Sergio Marchionne is continuing to leverage Jeep’s brand recognition to boost global sales, he hopes, to more than 1 million in the next few years.

Built in Italy but designed in the U.S., the 2015 Renegade will be sold in more than 100 markets around the globe. The company, and analysts interviewed by the Detroit Free Press, expect it to be a hit in China, Europe and South America.

The Renegade name should be familiar to enthusiasts, because it’s been used to designate special trim levels for the CJ-5 and CJ-7 – predecessors to the Wrangler – and the Liberty. It also was the name of a concept vehicle shown at the 2008 Detroit auto show. The 2015 Renegade will mark the first time the name has been used as its own model name.

“As this segment develops in the coming years, I think there is a very good chance it will be our top seller” internationally, Manley said.

Globally, the subcompact SUV segment accounts for 2.7 million in annual sales, Manley said. About 1.1 million of those sales are in Europe, with another 1.1 million in Asia and about 250,000 annually in the U.S.

While the Renegade’s front grille looks a lot like the Wrangler, the styling is a sharp departure from Jeep’s other new SUV, the Cherokee. The Cherokee, which went on sale last fall, looks more like the larger Grand Cherokee.

“I have always said the Cherokee styling does not necessarily indicate where Jeep brand is going,” Manley said. “I think this is a classic Jeep. I think that is what we wanted to create in this segment.”

The Renegade, which Car and Driver dubbed a “cute brute,” will compete against other small, hard-to-define crossovers, such as the Buick Encore, Kia Soul, Mini Countryman and Nissan Juke. The Renegade, however, will be the only one of those SUVs or crossovers with off-road capability.

Karl Brauer, senior analyst for Kelley Blue Book, said interest in small crossovers and SUVs is growing rapidly in the U.S. He predicted the Renegade will be at least as popular as the Buick Encore and Nissan Juke, if it is priced correctly.

“These cars are just basically the next big thing,” Brauer said. “And the thing about the Renegade is you get this combination of flexibility, fuel efficiency and it will be easy to drive.”

More importantly, it should do well in China, where sales of new cars and trucks could exceed 21 million this year, and in South America.

“The style and personality of their buyers is more aligned to smaller vehicles,” Brauer said. “And now, throw in on top of that the iconic Jeep name and styling, and you should have a hit.”

Fiat Chrysler expects to complete a deal with Guangzhou Auto by March 30 that would enable the company to assemble Jeeps in China. The midsize Cherokee is expected to be the first vehicle that is produced in China, but the Renegade could also be made there.

For now, the Renegade will be built exclusively at Fiat’s plant in Melfi, Italy.

Fiat Chrysler said it designed the Renegade to be compatible with 16 fuel-efficient engine and transmission combinations for different markets around the world. In Europe – but not the U.S. – it will be offered with two diesel engines.

It will come equipped with a fuel-efficient, nine-speed transmission in all markets.

Bragman said the investment in multiple engine and transmission combinations shows that Fiat Chrysler is serious about its global ambitions with the Renegade.

“In South America, this thing is going to be dynamite,” Bragman said.