The European Union is ready to give Ukraine 11 billion euros ($15 billion) in loans and grants over the coming years to help stabilize its economy, the head of the bloc’s executive arm said Wednesday.

The aid comes on top of $1 billion in energy subsidies the United States pledged Tuesday. It will help support Kiev while it negotiates a broad bailout program with the International Monetary Fund.

The EU package is “designed to assist a committed, inclusive and reforms-oriented government in rebuilding a stable and prosperous future for Ukraine,” Commission President Jose Manuel Barroso said.

The package foresees helping to modernize Ukraine’s gas transit system and providing technical assistance ranging from judicial reform to assistance in preparing elections, the Commission said. The package also calls for steps to accelerate achieving visa-free travel for Ukrainians to the 28-nation bloc.

That measure, if approved, would go down particularly badly in Moscow, since Russia has sought visa-free travel to Europe for its citizen for years. Suspending discussions on that project are among the measures EU leaders will consider at an emergency meeting Thursday to punish Russia over its occupation of Ukraine’s Crimean Peninsula. 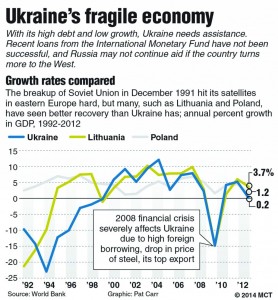 The headline figure of $15 billion for the EU’s aid package is the same amount that Russia was prepared to grant Ukraine in loans until the government of President Viktor Yanukovych was ousted in February.

Yanukovych took the Russian loans instead of a wide-ranging trade and economic agreement with the EU, a move that fueled the protests that led to his ouster.

Ukraine estimates it needs $35 billion in international rescue loans over the next two years.

This article appeared in print on page 1 of the March 6th, 2014 edition of Hamodia.