World Egypt’s Sisi Signals He Will Run for President
World 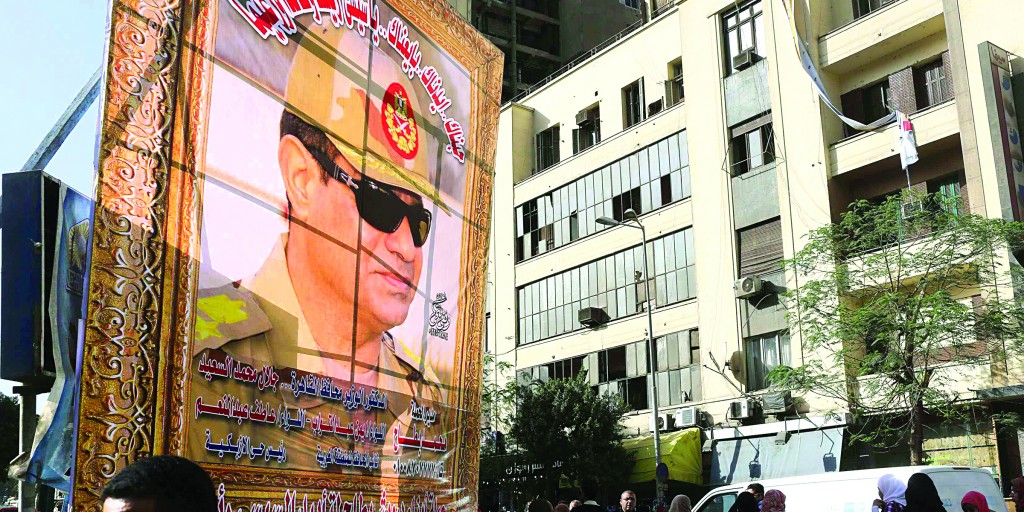 Egypt’s armed forces chief Field Marshal Abdel Fattah al-Sisi signaled on Tuesday that he will run for president, saying he cannot ignore the “majority” of Egyptians who want him to do so, state news agency MENA reported.

MENA quoted him as saying at a graduation ceremony at the Cairo war college that he could “not turn his back on calls by the majority of Egyptians for him to run for president.”

Sisi has been coy about his intentions for months, but his speech was the clearest pointer yet that he will stand for the top post in an election he is expected to win by a landslide.

Most Egyptians regard him as a decisive figure who can end the political turmoil that has gripped Egypt since a popular uprising toppled autocratic president Hosni Mubarak in 2011.

Sisi, who was Mubarak’s military intelligence chief and is now defense minister, has become so popular that his image appears on T-shirts and posters and even on chocolate bars.

Many Egyptians liken him to Gamal Abdel Nasser, the colonel who led a coup against the monarchy in 1952, set up an army-led autocracy and rounded up thousands of Brotherhood members.

In his speech, Sisi said Egypt was witnessing difficult times that required the unity of the people, army and police.

Sisi deposed Morsi in July after vast crowds of Egyptians protested in the streets against his rule, and then unveiled a political roadmap he said would lead to free and fair elections.

But Morsi’s overthrow was followed by Egypt’s bloodiest political struggle in its modern history, with the Brotherhood trying to regain power through street protests and authorities mounting a relentless security crackdown against it.

Apparently reacting to Sisi’s statement, they chanted “down, down with military rule” in a Cairo neighborhood where security forces killed hundreds at a pro-Morsi sit-in in August.

Since then, the authorities have arrested thousands of Islamists and declared the Brotherhood a terrorist group, driving many of its estimated million followers underground.

The upheaval has scared away tourists vital for Egypt’s struggling economy, as well as many investors.

But oil powers Saudi Arabia, the United Arab Emirates and Kuwait, who are generally hostile to the Brotherhood, came to Egypt’s rescue, providing billions of dollars in aid.

Western diplomats who have met Sisi said he was reluctant to run for president, acutely aware of the enormous challenges of the job, and of the reality that street protests have helped remove two Egyptian leaders in three years.

While Sisi’s supporters regard him as a savior, opponents hold him responsible for what human rights groups say are widespread abuses, including torture of political detainees.

Aside from an ailing economy which grew by only one percent in the first quarter of this fiscal year, an energy crisis, industrial action and the tenacious Muslim Brotherhood, Sisi faces a fast-growing Islamist insurgency.

Terrorists based in the Sinai Peninsula have killed hundreds of policemen and soldiers since Morsi’s fall. Attacks have spread elsewhere in Egypt, with attacks occurring almost daily.

The most lethal group, Ansar Bayt al-Maqdis, said one of its suicide bombers tried to kill the interior minister in Cairo last year and it claimed responsibility for killing two South Korean tourists last month.