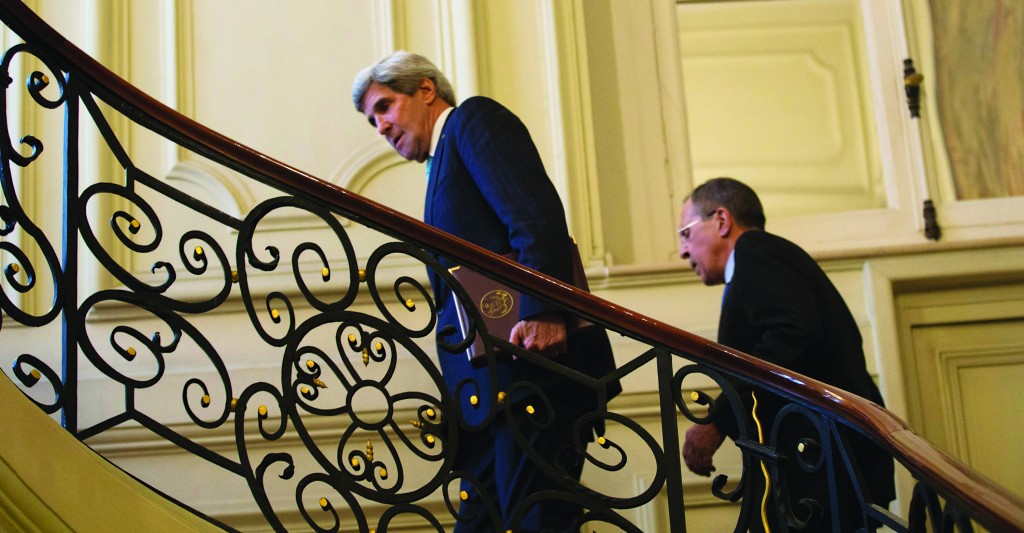 Attempts to foster the highest-level diplomatic meeting between Russia and Ukraine since Moscow ordered troops into Ukraine’s strategic Crimea region fell short Wednesday as Western officials scrambled for even small successes to keep the tense situation from escalating.

Ukraine Foreign Minister Andriy Deshchytsia said he canceled a flight home to Kiev after Secretary of State John Kerry urged him to stay in Paris on the outside chance that Russia’s top diplomat might agree to talk. But separate evening meetings in the same building ended without Deshchytsia and Russian Foreign Minister Sergey Lavrov crossing paths.

In an afternoon interview with The Associated Press, Deshchytsia said he hoped to brief Lavrov on a Ukraine plan to offer a pro-Russian public in Crimea more autonomy while still claiming it within the country’s borders. Any vote taken toward for autonomy would require international observers to replace armed groups in order to work, he said.

“Our position is to use all the peaceful means, all the diplomatic ways to settle the issue without victims and tragedy — and without taking territory away,” Deshchytsia said. “We don’t want war with Russia,” he said.

But Lavrov made clear he was not ready to meet.

Leaving the French Foreign Ministry, Lavrov was asked by reporters outside if he had met with his Ukrainian counterpart Wednesday night. “Who is it?” Lavrov answered. “I didn’t see anybody.”

He said officials “agreed to continue those discussions in the days to come to see how best we can help stabilize, normalize the situation and overcome the crisis.”

“The discussions will continue and that’s it.”

The comments made clear how elusive any resolution remains in the standoff between Russian President Vladimir Putin and the new government in neighboring Ukraine that ousted its Moscow-friendly president last month. Putin responded by sending troops to Crimea, a pro-Russian peninsula in southeastern Ukraine, where some are demanding a referendum for independence from Kiev.

In remarks to reporters late Wednesday, Kerry said at least some small successes were made during the daylong negotiations with each side and signaled that at least some plan was in the works that needs to gain approval from state leaders in Moscow, Kiev and Washington.

“I’d rather be where we are today than where we were yesterday,” Kerry said. He also said he had “no expectations, zero expectations” that Deshchytsia and Lavrov would meet.