The Bank of Israel launched the first stage of the issue of a new 50-shekel banknote on Tuesday, sending out samples for technical preparations and letting the public get its first look, too.

Ahead of the first new 50-shekel banknote entering circulation, the Bank distributed the first samples to manufacturers, suppliers, and operators of vending, counting and sorting machines, in order to calibrate them to accept the new banknote.

The Bank is allocating considerable resources in supplying information and guidance to the relevant professional firms, in order to enable them to prepare, technically and operationally, in a timely fashion. Technical data and banknote samples were delivered within the framework of designated training which was conducted today in Yerushalayim. 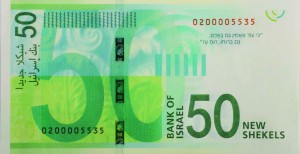 The developments in banknotes, the increased level of counterfeits around the world, and the technology that counterfeiters now possess require the Bank to bring the banknotes’ standards in line with the challenges of coming years. Banknotes from the new series will feature advanced standards of security, innovation and accessibility.

The banknotes differ from each other in color and length for the benefit of the blind and visually impaired, and the banknotes incorporate advanced anti-counterfeiting security features.

The existing banknotes will continue to be legal tender for several years, and the public will be given several years during which it will be possible to exchange the old banknotes for the new ones.

This article appeared in print on page 20 of the March 5th, 2014 edition of Hamodia.

Netanyahu Released From Hospital After Fainting on Yom Kippur