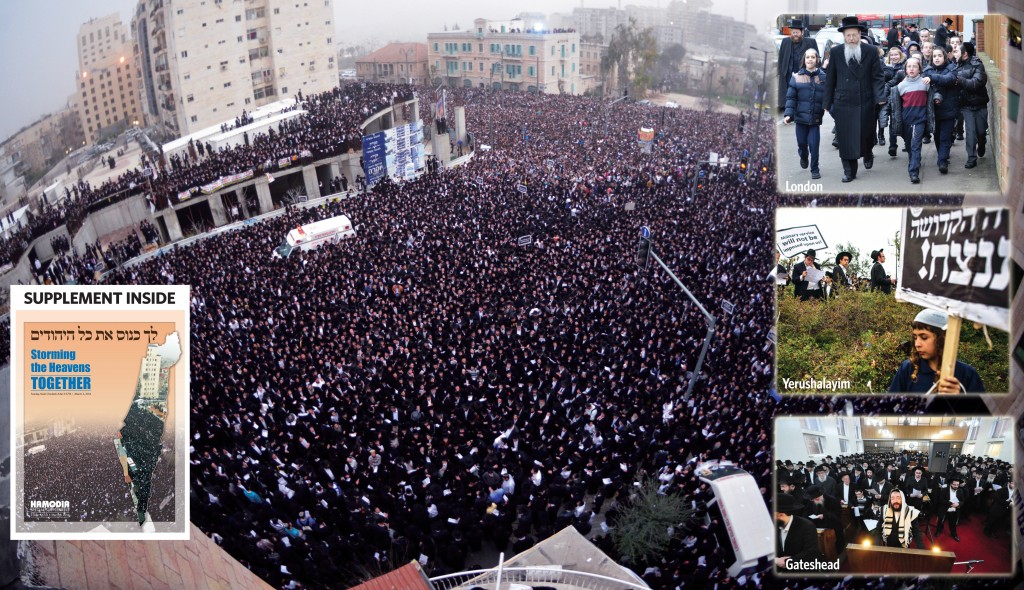 I have a solution for the Shaked Committee — that posse deputized by the Knesset to round up rebel chareidim (Rebs, for short) and bring them to injustice.

It seems the committee has run into a snag: Pooling their collective brains, they weren’t able to come up with a definition of “chareidi.”

Ayelet Shaked (HaBayit HaYehudi) chairs the Special Committee for the Equal Sharing of the Burden Bill for drafting chareidim. There is an old adage in the advertising business: “A camel is a horse put together by a committee.” The Shaked Committee couldn’t find a horse at a rodeo.

When they could not agree on a definition for chareidi, Shaked threw up her hands and sent the question of the taxonomy of chareidim to the wise men of the Justice Ministry and the Ministry of Education. Could their secular councils of sages pasken such a she’eilah? Sometimes you just have to have faith.

Joseph Engelberger, one of the pioneers of robotics, said, “I can’t define a robot, but I know one when I see one.”

That wouldn’t work here, though. The wise men of the Justice and Education ministries are more like the old Asian fable about the five blind men describing an elephant. As Yirmiyahu Hanavi said, “Hear this, O nation that is foolish and without understanding… who have eyes, but cannot see, who have ears, but cannot hear.”

The Shaked Committee could try looking in a dictionary. The New Oxford American Dictionary has the following definition:

“Ha·re·di n. (pl. –dim ) a member of any of various Orthodox Jewish sects characterized by strict adherence to the traditional form of Jewish law and rejection of modern secular culture, many of whom do not recognize the modern state of Israel as a spiritual authority. <ORIGIN> Hebrew, literally ‘one who trembles (in awe at the word of G-d).’”

Admittedly, the literal definition is a problem.

The Rebbe, Harav Meir’l of Premishlan, zy”a, said “Whoever wishes to understand the passuk, ‘Vayecherad Yitzchak charadah gedolah ad me’od — And Yitzchak shook with great fear and trembling,’ need only see the Chozeh of Lublin, zy”a, when he davens.”

In our own generation, I have seen the Amshinover Rebbe, shlita, shake like a lulav when making a brachah.

My brother, Harav Nota Schiller, shlita, Rosh Yeshivah of Ohr Somayach, heard a functional definition from, lbcl”c, Harav Yaakov Weinberg, zt”l, Rosh Yeshivah of Ner Israel: A chareidi is someone who doesn’t look for halachic “tax loopholes” to get around the system. Rather, his whole life is striving for perfection. An impossible goal? Perhaps. But, as the poet Robert Browning wrote, “Ah, but a man’s reach should exceed his grasp. Or what’s a heaven for?”

“We are concerned with our end goal,” answered the Vorker. “If I’m on the train to Leipzig, I have to go through 15 stations on the way. But Leipzig is where I’m headed. True, ‘Chassid’ is the end of the journey. However, that’s our destination. So our tickets are stamped ‘Chassid.’”

In December of 2000, I left Eretz Yisrael and went stateside. A few months later, my daughter called me from Ramat Beit Shemesh, all excited that she saw a want ad in The Jerusalem Post looking for a copywriter. I figured, you never know, so I emailed my resume with a letter.

Within half an hour, I got a phone call from Tel Aviv. We talked a while about my experience. Then my interviewer finally dropped THE QUESTION:

“Most of the people in the office are Meretz.”

“So what? I have no problem with them.”

“But you have to be able to get along with people.”

Somehow, it never dawned on the guy that he had been talking with me for close to an hour, from Tel Aviv to Brooklyn — on his shekel — and we were getting along just fine. He simply couldn’t get past his own anti-chareidi prejudice.

I didn’t get the job. And I never did settle the issue with him whether or not I was chareidi.

I may never have known for sure. But then, I saw the handwriting on the wall. Okay, it wasn’t handwriting; and it wasn’t on a wall. It was print and it was in a book. And it was on a kitchen table in my son and daughter-in-law’s home.

I was just in Yerushalayim for my einikel’s bris. (Thank you; only simchos by you, too.) And I happened to see a telephone book: Hamadrich Hachareidi — The Chareidi Directory. It’s a community phonebook, but the listings are segmented by social demographics, rather than by purely geographic areas.

On a whim, I turned to the shin pages. Lo and behold, there were — not one, but two — listings for Mordechai and Peshe Schiller: One was for my last rented apartment in Yerushalayim. The second was for my home in Ramat Beit Shemesh.

There it was. I discovered I’m doubly chareidi! Hey, maybe even ultra-chareidi.

So here’s my solution for the Shaked Committee: All you have to do to figure out who is a chareidi is get a copy of The Chareidi Directory. Tell them Mordechai sent you.