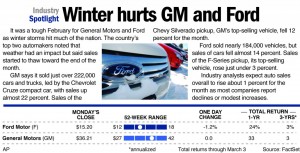 General Motors’ February sales slid 1 percent from a year earlier in February, and Ford’s dropped 6 percent, but Chrysler’s rose 11 percent during a month in which cold weather likely kept sales below expectations.

“Despite a slower start to 2014 than most people expected, we look forward to a very successful year, backed by plenty of new products and what should be the strongest GDP growth since the end of the recession,” Kurt McNeil, GM’s U.S. vice president of sales operations, said in a statement.

Ford’s sales of 183,947 were off pace because of the weather, but started to recover in the final week of the month, said John Felice, head of U.S. sales for the automaker. The Ford brand was down 7 percent, while Lincoln was 36 percent higher than a year ago.

Total U.S. auto industry sales increased less than 1 percent in February, according to an average of three industry forecasts, as buyers chose to stay home rather than brave cold dealer lots.

But Chrysler’s monthly sales increased for the 47th consecutive month, as the new Jeep Cherokee and its Ram 1500 pickups helped the company power through the month.

“The severe weather has been ideally suited for our legendary Jeep 4×4 capability as Jeep brand sales were up 47 percent and the brand had its best February sales ever,” Reid Bigland, Chrysler’s head of U.S. sales, said in a statement.

Nissan’s sales soared, as the company realigned its pricing and reduced incentives. Nissan’s growth was fueled by an 11 percent increase for its Altima midsize sedan and an 83 percent surge for the new Rogue crossover.

Nissan has lowered incentives by $375 per vehicle, which is $276 lower than the industry average, Diaz said.

Last year, Nissan realigned sticker prices of its vehicles to better reflect what it intended customers would pay.

“We were way, way overpriced,” Diaz said, adding that many vehicles had priced themselves out of the market and discouraged online shoppers from putting Nissan on their consideration list.

Since the Great Recession, U.S. auto sales have increased for four consecutive years, but the rate of that increase was expected to slow this year even before much of the country was hit with one of the worst winters on record.

“When the weather doesn’t behave, it has a negative impact on car shoppers who are looking for an easy and smooth process at the dealership, so that’s why sales will be weak for a second month in a row,” Edmunds.com Senior Analyst Jessica Caldwell said in a recent report.

Now, industry incentives and inventory levels are creeping upwards, and automakers will be under pressure to deliver big results this spring.

“As the weather improves … dealerships will be filled with eager shoppers,” Caldwell said. “The strength of pent-up demand promises to keep sales on the right path as spring approaches.”