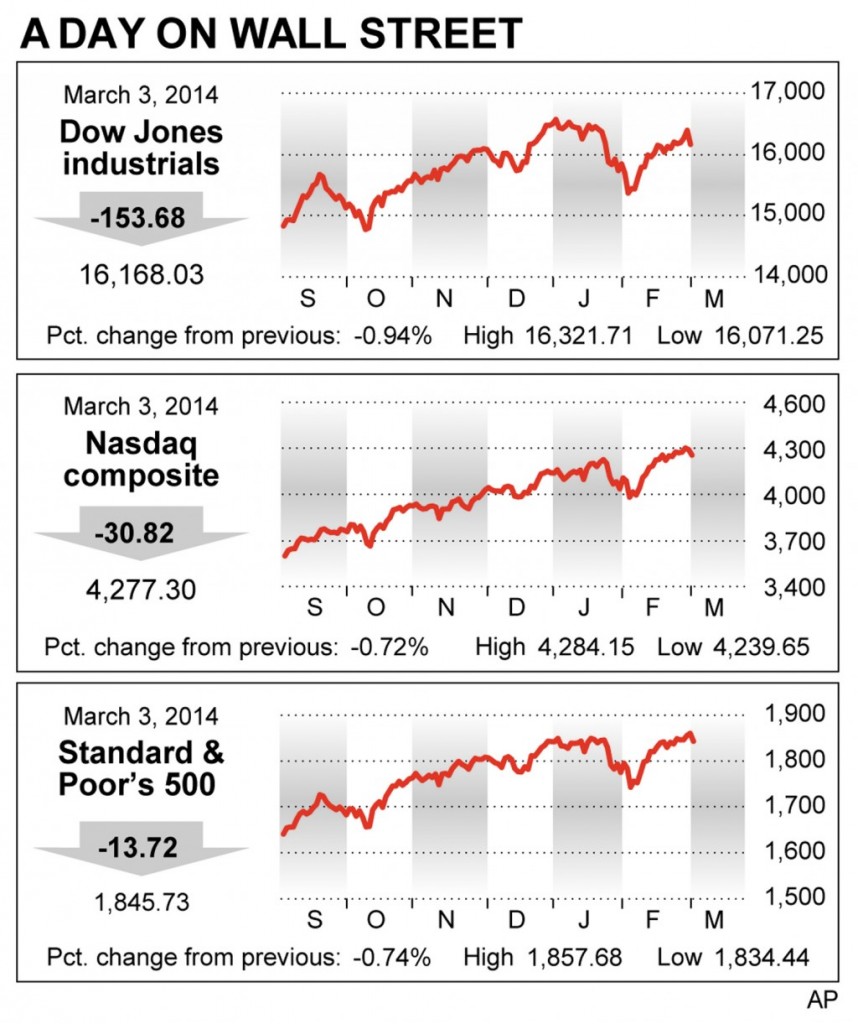 U.S. stocks fell the most in a month and the price of crude oil rose sharply as traders feared Russian exports could be affected by sanctions. Gold and bond prices rose as investors sought safety.

The Standard & Poor’s 500 index had its biggest drop since Feb. 3, following markets in Europe and Asia lower, as Russia’s military tightened its grip on the Crimea region of Ukraine.

It was the second time this year the U.S. stock market has been roiled by developments in emerging markets. Stocks slipped in January as investors worried about slowing growth in China and other emerging economies. Now a showdown in Ukraine has grabbed investors’ attention and stoked fears of a tit-for-tat campaign of economic sanctions between Russia and Western powers.

“Financial markets are doing exactly would you would expect them to,” said Phil Orlando, chief equity market strategist at Federated Investors. “You have no idea what is going to happen and how this is going to play out.”

“Europe gets a lot of energy supplies from Russia,” said David Kelly, chief global strategist at JPMorgan funds. “So, Europe would be a lot more directly affected by a trade war with Russia than the United States would.”

Kelly says that the most likely scenario is that Russia and Western powers, including the U.S., will reach a compromise relatively quickly. That would send stock prices higher.

As investors sold risky stocks, they bought safer assets such as gold and U.S. government debt securities. The dollar and the Japanese yen also increased in value.

The price of crude following warnings by Washington and other governments that Russia, a major oil exporter, might face sanctions after it seized control of Ukraine’s Crimean Peninsula. Russia was the world’s second-largest producer of oil in 2012, accounting for 12.6 percent of global supplies, according to the International Energy Agency.

The drop in stocks might also present investors with the opportunity to buy stocks at lower prices, said Terry Sandven, chief equity strategist for U.S. Bank.

Manufacturing in the U.S. expanded at a faster pace in February as new orders and businesses boosted their stockpiles. The Institute for Supply Management, a group of purchasing managers, said Monday that its manufacturing index rose to 53.2 in February from 51.3 in January. Any reading above 50 signals growth.

Americans also spent more in January, but the increase came from a surge in spending on heating bills during the harsh winter. Spending in areas such as autos and clothing declined. Spending rose 0.4 percent in January after a 0.1 percent gain in December, the Commerce Department said Monday. The December figure was revised down from a 0.4 percent increase.

Among other stocks making big moves on Monday: