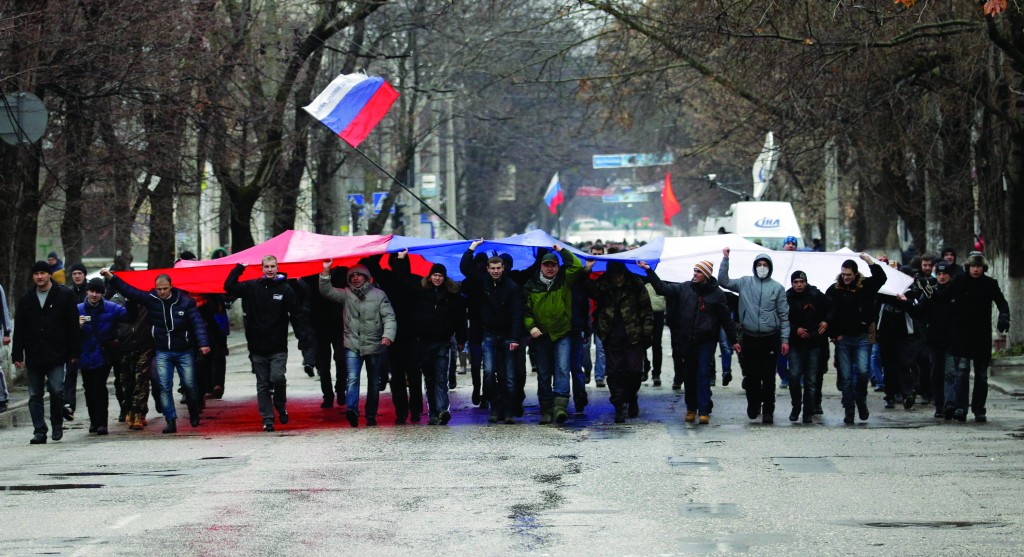 Dozens of armed men in military uniforms seized an airport in the capital of Ukraine’s strategic Crimea region early Friday, a report said.

Witnesses told the Interfax news agency that the 50 or so men were wearing the same gear as the ones who seized government buildings in the city, Simferopol, on Thursday and raised the Russian flag.

The report could not be immediately confirmed.

The events in the Crimea region have heightened tensions with neighboring Russia, which scrambled fighter jets to patrol borders in the first stirrings of a potentially dangerous confrontation reminiscent of Cold War brinksmanship.

While the government in Kiev, led by a pro-Western technocrat, pledged to prevent any national breakup, there were mixed signals in Moscow. Russia pledged to respect Ukraine’s territorial integrity.

Yanukovych was said to be holed up in a luxury government retreat, with a news conference scheduled Friday near the Ukrainian border. He has not been seen publicly since Saturday.

On Thursday, as masked gunmen wearing unmarked camouflage uniforms erected a sign reading “Crimea is Russia” in Simferopol, Ukraine’s interim prime minister declared the Black Sea territory “has been and will be a part of Ukraine.”

Yanukovych fled by helicopter last week as his allies deserted him. The humiliating exit was a severe blow to Russian President Vladimir Putin. The Russian leader has long dreamed of pulling Ukraine — a country of 46 million people considered the cradle of Russian civilization — closer into Moscow’s orbit.

For Ukraine’s neighbors, the specter of Ukraine breaking up evoked memories of centuries of bloody conflict.

Russia’s dispatch of fighter jets Thursday to patrol borders and drills by some 150,000 Russian troops — almost the entirety of its force in the western part of the country — signaled strong determination not to lose Ukraine to the West.

The dramatic developments posed an immediate challenge to Ukraine’s new authorities as they named an interim government for the country, whose population is divided in loyalties between Russia and the West. Crimea was once the crown jewel in Russian and then Soviet empires.

It only became part of Ukraine in 1954 when Soviet leader Nikita Khrushchev transferred jurisdiction from Russia — a move that was a mere formality until the 1991 Soviet collapse meant Crimea landed in an independent Ukraine.

In the capital, Kiev, the new prime minister said Ukraine’s future lies in the European Union, but with friendly relations with Russia.

Arseniy Yatsenyuk, named Thursday in a boisterous parliamentary session, now faces the difficult task of restoring stability in a country that is not only deeply divided politically but on the verge of financial collapse. The 39-year-old served as economy minister, foreign minister and parliamentary speaker before Yanukovych took office in 2010, and is widely viewed as a reformer who enjoys the support of the U.S.

Shortly before the lawmakers chose him, Yatsenyuk insisted the country wouldn’t accept the secession of Crimea. The Black Sea territory, he declared, “has been and will be a part of Ukraine.”

A pro-Russian activist who gave only his first name, Maxim, said he and other activists were camped overnight outside the parliament when about 50 men wearing flak jackets and carrying RPG launchers and sniper rifles took over the building.

“They were asking who we were. When we said we stand for the Russian language and Russia, they said: ‘Don’t be afraid. We’re with you.’ Then they began to storm the building, bringing down the doors,” he said. “They didn’t look like volunteers or amateurs; they were professionals. This was clearly a well-organized operation.”

Oleksandr Turchynov, who stepped in as acting president, condemned the assault as a “crime against the government of Ukraine.” He warned that any move by Russian troops off of their base in Crimea “will be considered a military aggression.”

Experts described a delicate situation in which one sudden move could lead to wider conflict.

In a bid to shore up Ukraine’s fledgling administration, the International Monetary Fund said it was “ready to respond” to Ukraine’s bid for financial assistance. The EU is also considering emergency loans.

IMF chief Christine Lagarde said that it was in talks with its partners on “how best to help Ukraine at this critical moment in its history.” Ukraine’s finance ministry has said it needs $35 billion over the next two years to avoid default.

Western leaders lined up to support the new Ukrainian leadership, with the German and British leaders warning Russia not to interfere.

“Every country should respect the territorial integrity and sovereignty of the Ukraine,” British Prime Minister David Cameron said after a meeting with German Chancellor Angela Merkel in London. NATO defense ministers met in Brussels, and Defense Secretary Chuck Hagel emerged appealing for calm.

“These are difficult times,” he said, “but these are times for cool, wise leadership on Russia’s side and everyone’s side.”

Yet the prospect of the West luring Ukraine into NATO is the very nightmare that Russia is trying to avoid. Trenin of the Carnegie Center said a Ukraine-NATO courtship “would really raise the alarm levels in Moscow.”

Yanukovych declared Thursday in a statement that he remains Ukraine’s legitimate president. “I have to ask Russia to ensure my personal safety from extremists,” Yanukovych’s statement read, according to Russian news agencies. Shortly after, an unnamed Russian official was quoted as saying that Yanukovych’s request had been granted.