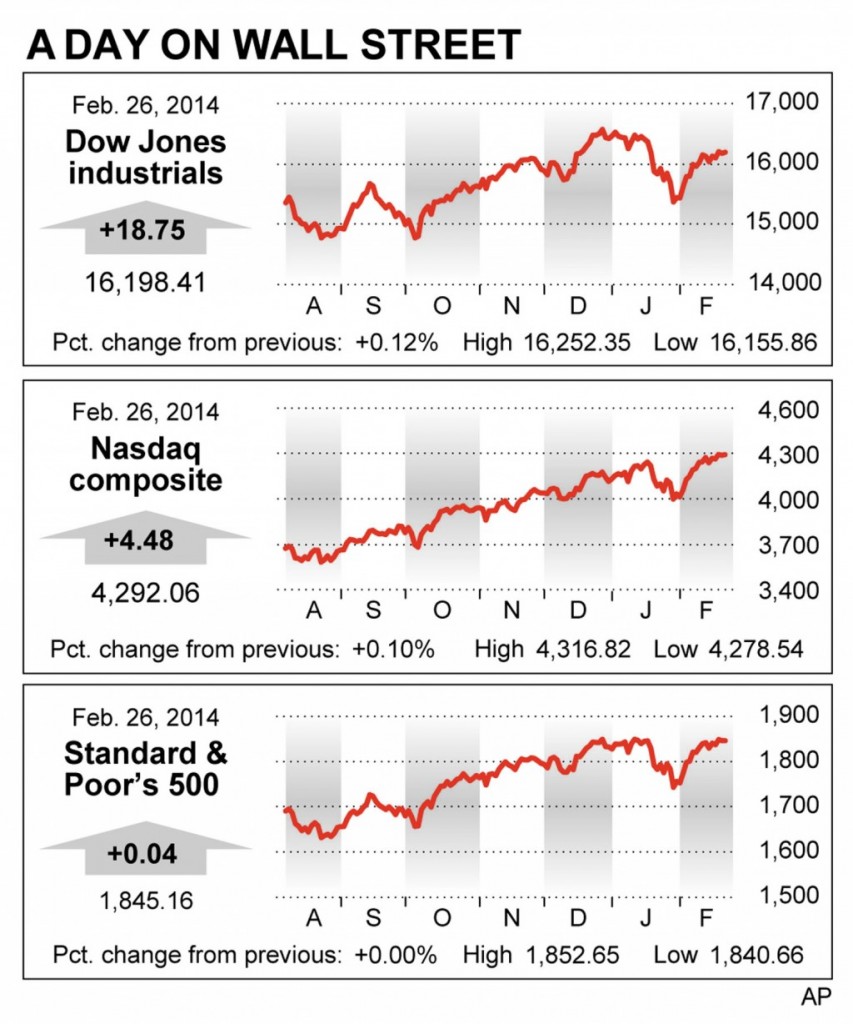 The stock market is struggling to take it to the next level.

For a third straight day the Standard & Poor’s 500 index traded above its record close but fell back to end below it. An early move higher Wednesday was led by retailers and home builders, but the gains mostly petered out in the afternoon. By the closing bell the index was up just a fraction of a point.

After rebounding from losses early in the year, when investors were concerned about the outlook for growth in emerging markets and the U.S., the stock market now appears to be at a crossroads.

While investors seem comfortable attributing the recent weakness in economic reports to the unusually cold weather, they also appear reluctant to push stocks higher before they see more evidence of growth.

“This is a market that has been trying to decipher how much of the negative news is weather-based, against concerns that we have moved into a soft patch,” said Quincy Krosby, a market strategist at Prudential Financial.

Home builder stocks rose sharply after the government reported that U.S. sales of new homes jumped in January at the fastest pace in more than five years. That’s a hopeful sign after a slowdown in the housing market last year caused by higher interest rates. PulteGroup rose 57 cents, or 2.8 percent, to $21.25 and Lennar rose $1.52, or 3.6 percent, to $43.78.

Lowe’s climbed $2.61, or 5.4 percent, to $50.72. The company’s net income rose 6 percent in the most recent quarter as the home-improvement retailer continued to benefit from a recovery in the housing market. The company also announced a new $5 billion stock repurchase program.

“We’ve dialed estimates down in that space, simply because of worries about the effects of the weather,” said Darrell Cronk, regional chief investment officer for Wells Fargo Private Bank. “A lot of people were walking in today expecting some of those retail companies to have much softer results.”

Investor may get a catalyst to push stocks higher on Thursday when Janet Yellen, the new head of the Federal Reserve, testifies in front of the Senate’s Banking Committee. Stocks jumped Feb. 11 when Yellen spoke to Congress, and said that she would continue the central bank’s market-friendly, low-interest rate policies.

The comments were her first in public since taking over for Ben Bernanke at the Fed. Her appearance in the Senate was delayed because of a winter storm.