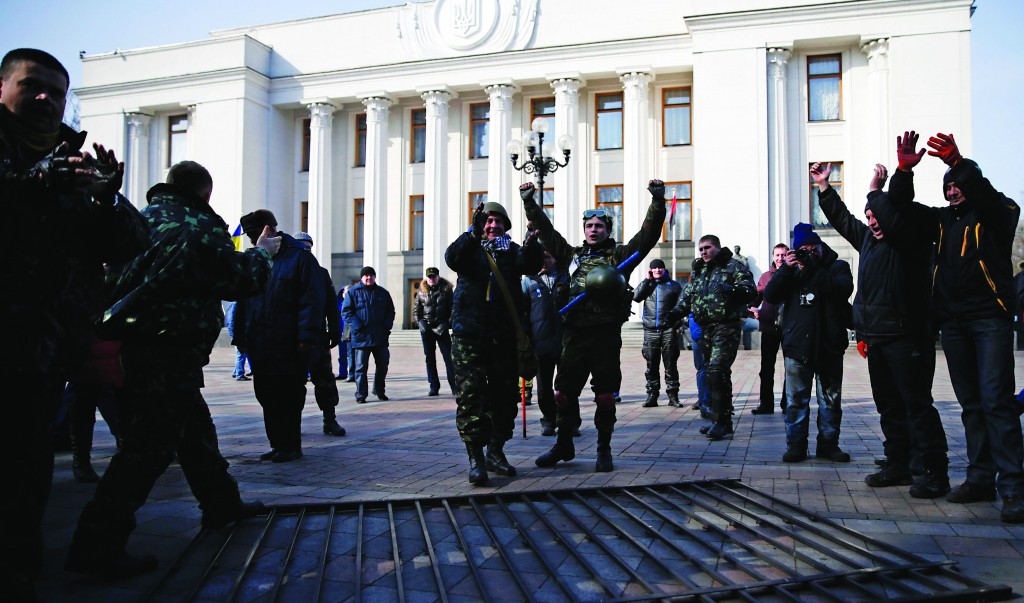 Ukraine’s protest leaders on Wednesday named ministers they want to form a new government following the overthrow of President Viktor Yanukovych, as Russia put troops on high alert in a show of strength.

President Vladimir Putin’s order to 150,000 troops to be ready for war games near Ukraine was the Kremlin’s boldest gesture yet after days of saber-rattling since its ally Yanukovych was ousted over the weekend.

Moscow denied that the previously unannounced drill in its western military district was linked to events in its neighbor, but it came amid a series of increasingly strident statements about the fate of Russian citizens and interests.

With the political turmoil hammering Ukraine’s economy, the central bank said it would no longer intervene to shield the hryvnia currency, which tumbled 4 percent on Wednesday and is now down a fifth since January 1. Wednesday’s abrupt abandonment of Ukraine’s currency peg sent ripples to Russia where the rouble fell to five-year lows and bank shares fell.

In Kiev, leaders of the popular protests that toppled Yanukovich named former economy minister Arseny Yatseniuk as their choice to head a new interim government.

In a display of people power, the so-called ‘Euromaidan’ council made its announcement of Yatseniuk, and candidates for several other key ministries, after its members addressed crowds on Independence Square.

Oleksander Turchinov, now acting president, said the new government would have to take unpopular decisions to head off default and guarantee a normal life for Ukraine’s people.

The Euromaidan council’s proposals have to be approved by parliament, which meets on Thursday in an atmosphere heavy with memories of recent bloodshed, whose hundred or so victims are taking on the status of martyrs.

In Crimea, thousands of ethnic Russians, who form the majority in the region, demonstrated for independence. They scuffled with rival demonstrators supporting the new Kiev authorities. The Crimea is home to part of Russia’s Black Sea Fleet, which Moscow said it was taking steps to secure.

One person died in the Crimea protest, apparently of a heart attack during a crush of the crowd, Interfax news agency reported. A Reuters correspondent on the scene reported surging crowds and scuffles but no major violence.

Russia has repeatedly expressed concern for the safety of Russian citizens in Ukraine, using language similar to statements that preceded its invasion of Georgia in 2008.

“In accordance with an order from the president of the Russian Federation, forces of the Western Military District were put on alert at 1400 today,” Interfax news agency quoted Russian Defence Minister Sergei Shoigu as saying.

Shoigu also said Russia was also “carefully watching what is happening in Crimea” and taking “measures to guarantee the safety of facilities, infrastructure and arsenals of the Black Sea Fleet,” in remarks reported by state news agency RIA.

Since Yanukovich’s downfall on Friday, all eyes have been on Putin, who ordered the invasion of neighboring Georgia in 2008 to protect two self-declared independent regions with many ethnic Russians and others holding Russian passports, and then recognized the regions as independent states.

Any military action in Ukraine, a country of 46 million people that has close ties with European powers and the United States, would be far more serious — the closest the West and Russia have come to outright confrontation since the Cold War.

Despite the alarm raised by the sabre-rattling, many analysts expect Putin will pull back before taking armed action.

U.S. Secretary of State John Kerry said Russia should respect the territorial integrity of Ukraine and be “very careful” in its judgments toward its neighbor.

“What we need now to do is not get into an old, Cold War confrontation,” he said on MSNBC.