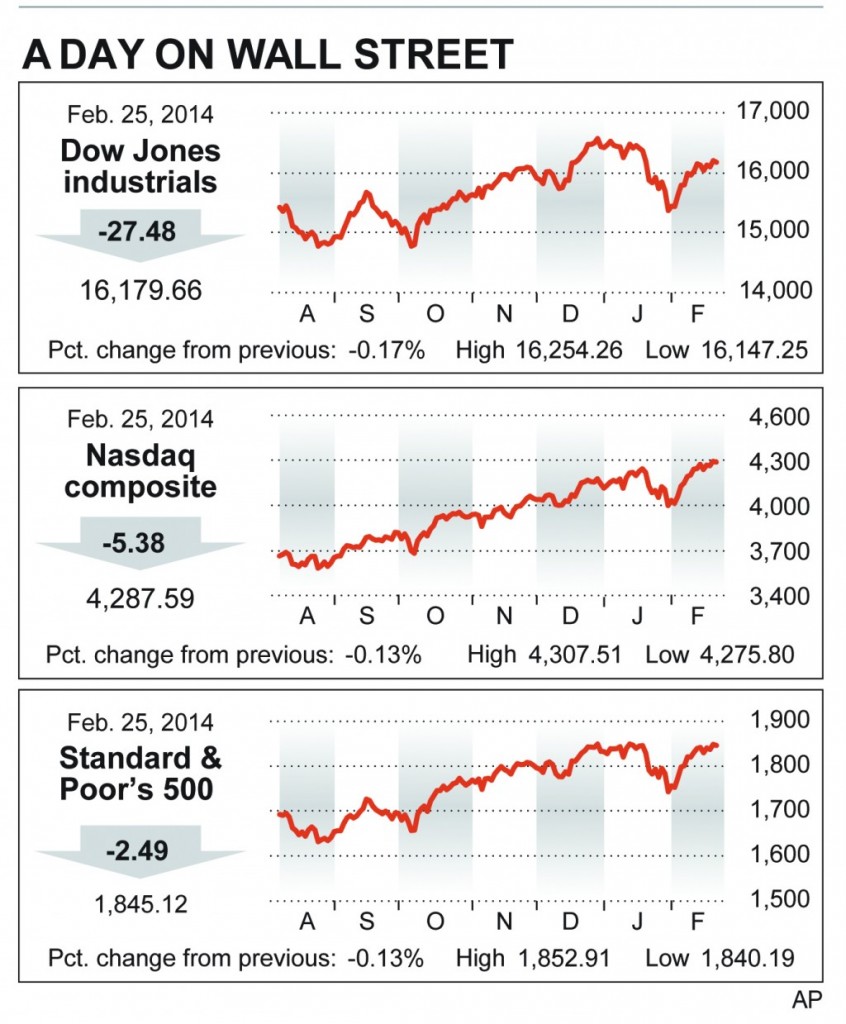 Stocks were unable to find any momentum on Tuesday.

The market drifted between gains and losses throughout the day, then headed steadily lower in the last hour of trading. Investors found some solace in strong results from Home Depot and Macy’s. The enthusiasm was not enough, however, to offset an unexpectedly steep decline in consumer confidence this month, due largely to bitter cold weather and winter storms that affected much of the country.

“The weather is having an impact on everything, from homes, vehicles to retail sales, but fortunately we expect that pent-up demand to return later this year,” said Joseph Tanious, a global market strategist at J.P. Morgan Funds.

Even the retailers, who have a tendency to blame the weather for poor results, had a valid point this time around.

Macy’s reported an 11 percent rise in fourth-quarter income that handedly beat analysts’ expectations, but sales came up short due to the weather. The company said that at one time in January, 30 percent of its stores were closed because of inclement weather.

“We don’t like to use weather as an excuse but we think we probably lost $100 million in the month of January,” Home Depot’s chief financial officer, Carol Tome, said in a conference call with investors. “Atlanta was frozen, for example. It was tough here.”

Investors were less forgiving about a weak consumer confidence report.

The Conference Board’s index of consumer confidence fell to 78.1 in February from 80.7 the month before. That was below the 80.1 level economists polled by FactSet were expecting. The report is a closely watched indicator of how likely consumers are to spend money and keep the economy moving forward.

The confidence slump was the latest sign in the last several weeks that the recent bout of cold weather has slowed the economy. The regions that had the biggest declines in confidence were in the middle of the storm earlier in this month that brought snow from Atlanta to Boston.

“Perhaps (confidence) would have done slightly better had the weather been less dismal,” economists at the investment bank RBS wrote in a note to investors.

Investors should expect more muddled days like this for the next few weeks, strategists say.

Fourth-quarter earnings reports are mostly over. With Home Depot’s results now out, all 30 members of the Dow have released earnings for this quarter. By the end of the week, 486 out of the 500 members of the S&P 500 will have reported their results.

That means investors will have little in the way of corporate news to sort through, and fewer reasons to push individual stocks higher.

The economic data for the next few weeks is likely to be a wash as well, as most of it would have been impacted one way or another by the cold weather.