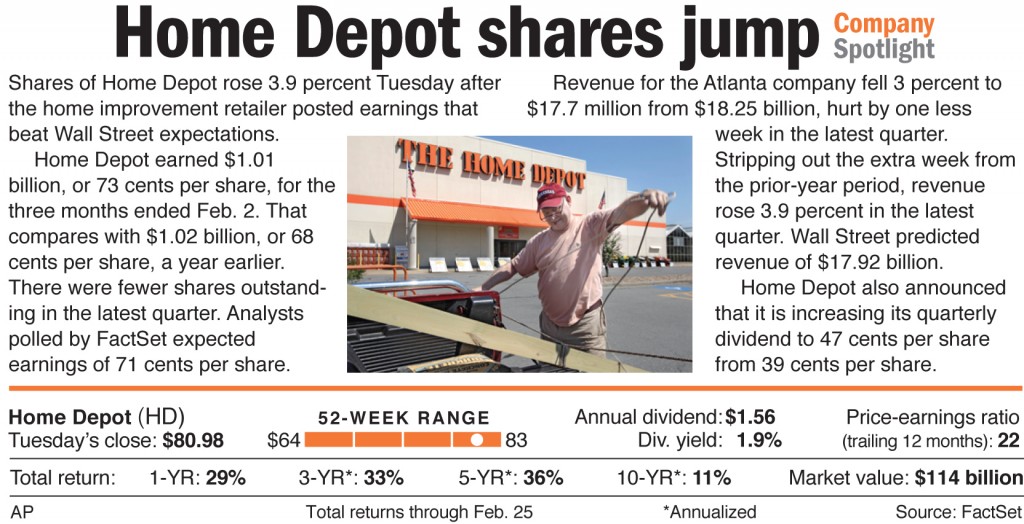 Home Depot’s fiscal fourth-quarter net income dipped 1 percent, hampered by bad winter weather and one less week in the period than a year ago.

The U.S. housing market has emerged from a deep slump, aided by rising home prices, steady job growth and fewer troubled loans dating back to the housing-bubble days. That has spurred customers to spend more to renovate their homes.

But some believe that the combination of anticipated higher interest rates, continued dampened availability of mortgages, and price increases for new homes from 2013 will tamp down housing demand this year. And that, in turn, might slow down spending on homes.

Analysts polled by FactSet expected earnings of 71 cents per share.

Home Depot said that fourth-quarter sales at stores open at least a year rose 4.4 percent. For stores in the U.S., the figure increased 4.9 percent.

This metric is a key indicator of a retailer’s health, because it excludes results from stores recently opened or closed.

Analysts forecast full-year earnings of $4.42 per share on revenue of $82.85 billion.