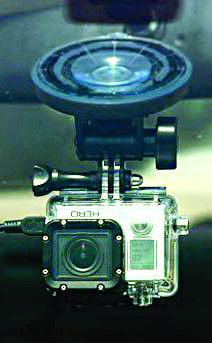 Two New Jersey police officers have been charged with conspiracy, misconduct and records tampering after video from a second dashboard camera surfaced in their 2012 arrest of a man they claimed resisted arrest.

All charges against the defendant, Marcus Jeter, 30, of Bloomfield were dropped.

Jeter’s attorney, Stephen Brown said the new video was turned over by the town of Bloomfield after he filed an open-records request. Without it, “I’d be in jail,” Jeter said.

The second video, which prosecutors did not have when they charged Jeter, shows a cruiser crossing the median through oncoming traffic and banging into Jeter’s car head-on as it is stopped along the Garden State Parkway — something not mentioned in the police report, Brown said.

It also shows Jeter with his hands in the air virtually the entire time.

The dashcams show Jeter pulling over to the side of the road, putting his hands in the air while still buckled up behind the wheel of his car, an officer breaking out the window and unbuckling Jeter, and Jeter being punched and wrestled to the ground.

The arresting officers, Orlando Trinidad and Sean Courter, both 33, pleaded not guilty and were released without bail. Trinidad also faces a charge of aggravated assault.