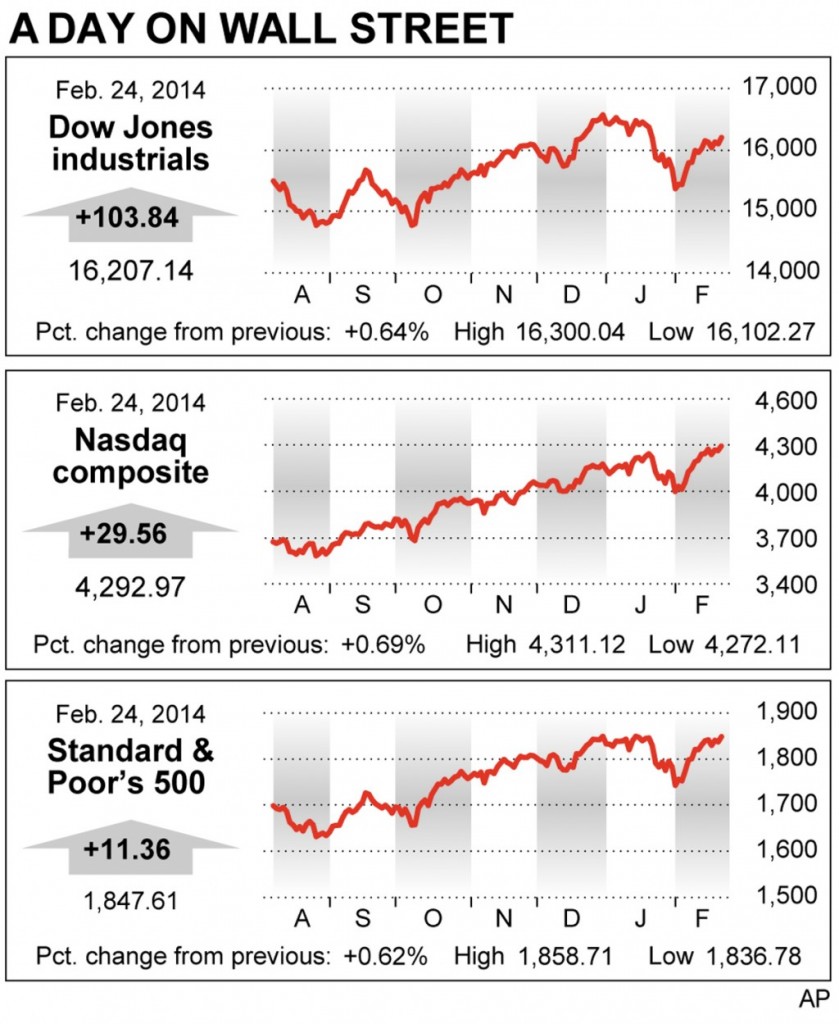 The stock market ended higher Monday, but a late fade kept it from closing at an all-time high.

The market marched broadly higher most of the day, helped by optimism about the economy and more corporate mergers, only to slowly lose momentum in the final half hour of trading.

Investors had little in the way of economic data or corporate earnings to work through, so much of Monday’s focus was on another round of corporate deal making.

M&A has taken off this year. Last week, Forest Laboratories and Actavis announced a $25 billion merger and Facebook said it was buying WhatsApp for $19 billion. That’s on top of deals or offers announced this week.

Companies buying competitors, or buying up a company whose product interests them, should be seen as a positive for stocks, market watchers say.

“It shows that companies still see value in this market, even at these highs,” said Quincy Krosby, a market strategist at Prudential Financial.

In the last two-and-a-half weeks, the stock market has basically erased of the losses it experienced after a difficult start to the year.

The S&P 500 index was down as much 6 percent for the year as of February 3 as investors worried about emerging markets like China and Turkey. The U.S. economic recovery was also showing signs of slowing growth.

But the U.S. stock market has recovered as turbulence in overseas markets calms down.

In the latest development in overseas markets, the chaos in Ukraine came to an abrupt halt over the weekend following the ouster of President Viktor Yanulovych. Investors had been worried about the escalating violence.

“The risks in emerging markets continue to recede, and now the problems in the Ukraine are out of the way,” said Bill Stone, chief investment strategist at PNC Wealth Management.

The S&P 500’s 1,850-point level continues to be a ceiling for investors trying to bid stocks higher. The index has tried to close above 1,850 three times in the last three months, failing each time.

Investors have a chance to test all-time highs after economic reports come out later this week.

In other corporate news: