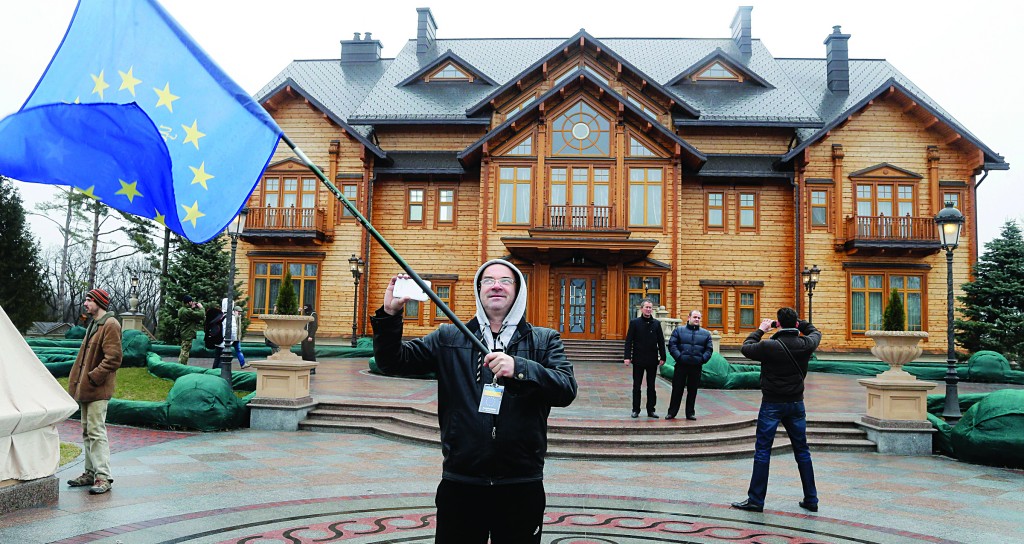 With an ally claiming presidential powers Sunday and the whereabouts and legitimacy of the nominal president unclear, newly freed opposition icon Yulia Tymoshenko may feel her chance to take Ukraine’s leadership has come. But even among protesters who detest President Viktor Yanukovych, Tymoshenko sparks misgivings.

The former prime minister, who was convicted of abuse of office in a case widely seen as political revenge by her arch-foe Yanukovych, is a polarizing figure in a country staggering from political tensions that exploded into violence. Admired by many for her flair and fiery rhetoric, Tymoshenko is regarded  by others as driven by intense ego and tainted with corruption.

Just a day after she left the hospital where she was imprisoned, demonstrators outside the Cabinet of Ministers expressed dismay that she could be Ukraine’s next president. One of them held a placard depicting Tymoshenko taking power from Yanukovych and reading, “People didn’t die for this.”

Ukraine is in a delicate state of uncertainty since Yanukovych and protest leaders signed an agreement to end the conflict that left more than 80 people dead last week in Kiev. Soon after signing it, Yanukovych’s whereabouts are unclear after he left the capital for his support base in eastern Ukraine. Allies are deserting him.

Russia’s next moves in the crisis were not immediately clear, but Washington warned Moscow not to intervene militarily.

The newly emboldened parliament, now dominated by the opposition, struggled to work out who is in charge of the country and its ailing economy. Fears percolated that some regions might try to break away and seek support from neighboring Russia, particularly the Crimean peninsula where Russia’s Black Sea naval fleet is based.

Ukraine is deeply divided between eastern regions that are largely pro-Russian and western areas that widely detest Yanukovych and long for closer ties with the European Union.

Yanukovych set off a wave of protests by shelving an agreement with the EU in November, and the movement quickly expanded its grievances to corruption, human rights abuses and calls for Yanukovych’s resignation.

The parliament on Sunday assigned presidential powers to its new speaker, Tymoshenko ally Oleksandr Turchinov, who said top priorities include saving the economy and “returning to the path of European integration,” according to news agencies. The latter phrase is certain to displease Moscow, which wants Ukraine to be part of a customs union that would rival the EU and bolster Russia’s influence. Russia granted Ukraine a $15 billion bailout after Yanukovych backed away from the EU deal.

The Kiev protest camp at the center of the anti-Yanukovych movement filled with more and more dedicated demonstrators Sunday, setting up new tents. Demonstrators posed with an APC and two water cannon that protesters seized during last week’s clashes and carried flowers to memorialize the dead, some of whom were killed by snipers.

Tymoshenko increasingly appears to have the upper hand in the political battle, winning the backing Sunday of a leading Russian lawmaker and congratulations from German Chancellor Angela Merkel and U.S. senators on her release.

Although her spokeswoman, Maria Soroka, said it’s too early to discuss whether she will run for president in early elections called for May 25, Tymoshenko is possessed of adamant determination. Even from a wheelchair because of a back problem that was aggravated in 2 1/2 years of imprisonment, she was a powerful speaker Saturday to a crowd of tens of thousands at the protest camp.

“She knows how to do it. She is our hero,” said Ludmilla Petrova, at the square the next day.

“She is just as corrupt as Yanukovych,” said 28-year-old Boris Budinok. “We need new faces in Ukrainian politics.”

Susan Rice, President Barack Obama’s national security adviser, said he and Russian President Vladimir Putin agreed during a telephone conversation Friday that a political settlement in Kiev should ensure the country’s unity and personal freedoms. Rice also told NBC on Sunday that it would be a “grave mistake” for Russia to intervene militarily in Ukraine.

The Kremlin has been largely silent about whether it still supports Yanukovych. Putin, who presided over the close of the Sochi Olympics, has not spoken about recent events in Kiev. He had developed a productive working relationship with Tymoshenko when she was Ukraine’s prime minister.

Russia recalled its ambassador from Kiev for consultations because of the developments in Ukraine, the Russian Foreign Ministry said on its website.