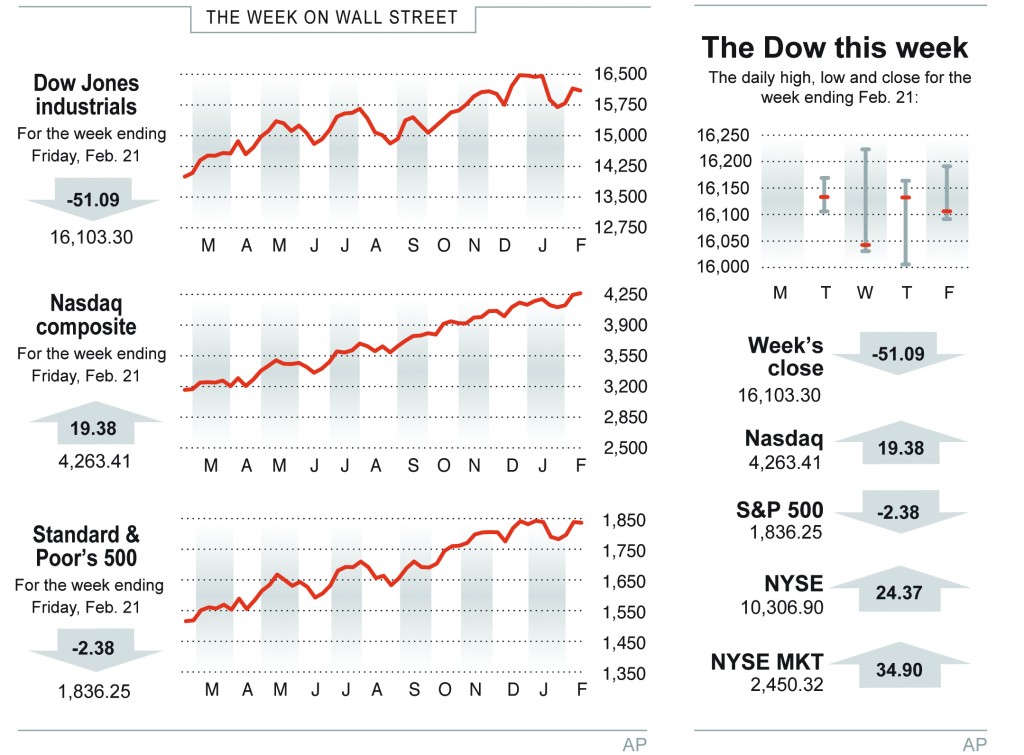 Stocks slipped on Friday, pushing the market to a weekly loss, as investors assessed the latest round of company earnings.

Express Scripts, the largest U.S. pharmacy benefits manager, fell after its fourth-quarter earnings slipped, hurt by the loss of UnitedHealth, a large customer. Groupon plunged after the online deals company said it expects to post a loss this quarter and issued a weak outlook for the year.

The Standard & Poor’s 500 index rose in early trading Friday and had almost wiped out its loss for the year by late morning, climbing to within two points of its record close. By late afternoon the index started to turn lower.

The stock market has gained this month after getting a boost from decent corporate earnings for the fourth quarter and optimism that the economy will start to pull out of its winter slump as the weather improves.

While investors have been willing to overlook much of the weak economic data this month, they appear reluctant to push the stock market back above its recent highs before they see firmer evidence that the economy is sustaining its recovery.

Investors are “giving the economic data points a bit of a free pass, but at the same time they’re not fully convinced either,” said Robert Pavlik, chief market strategist at Banyan Partners, a wealth management firm.

Groupon plunged $2.25, or 21.9 percent, to $8.03, after the online deals company said it was ramping up its marketing campaign and forecast 2014 pre-tax earnings to be only slightly higher than last year.

Stock investors have had a bumpy ride so far this year.

The S&P 500 was down almost 6 percent for the year at the start of February amid concerns about slowing growth in China and other emerging markets, as well as worries about the state of the U.S. economy. Since then stocks have rebounded, but some investors aren’t convinced the recovery will last.

“I’ve felt all along that this is going to be a very volatile year,” said Uri Landesman, president of Platinum Partners, an investment management company. “For me, you’ve got a lot more downside than upside.”

The S&P 500 rose almost 30 percent last year, and investors are now too bullish on the stock market, making it vulnerable to a sell-off, Landesman said.

Ameren, a utility company based in St. Louis, Mo., was among the winners on Friday.

The stock rose $2.07, or 5.3 percent, to $40.88, making it the biggest gainer in the S&P 500. Ameren reported earnings that beat Wall Street’s expectations after cold weather boosted demand for gas and electricity.

Among other stocks making big moves on Friday: