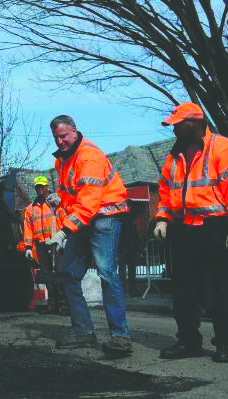 New York City has declared war on its potholes.

Eliminating the craters in the asphalt, an all-too-common scourge of the city’s roads amid the harshest winter in years, has become a top priority of Bill de Blasio’s administration. The point was underscored Thursday when the mayor himself donned a bright orange road-crew jacket, jeans and work boots to tackle a pothole in Queens.

De Blasio bent his gangly 6-foot-5 frame to first shovel asphalt into the 8-inch-deep hole and, along with the rest of the crew, pounded it into place to cheers from a few winter-weary residents.

“A new career path has opened up to me,” the mayor joked.

“That thing was bigger than the Grand Canyon!” complained Sylvia Alloggiamento, whose daughter lived on the block, while her friend Dolores Gaidis bemoaned that the pothole had been “unavoidable” every time she turned her car onto the street.

The city’s Department of Transportation has filled 113,131 potholes so far in 2014, according to de Blasio, a total greater than the number filled during the same period in 2012 and 2013 combined.

“All the storms, tire chains and snowplows have added up to unprecedented wear-and-tear on our streets,” said Mayor de Blasio, who has grown visibly frustrated by the relentless winter, which has dumped more than 50 inches of snow on the city during the first weeks of his administration and created several political headaches. The mayor noted that bitter cold temperatures and the salt used to treat icy roads have also caused damage.

The city has added $7.3 million to the department’s budget to help combat the potholes, he said. The Department of Transportation has also deployed more than 50 crews on weekly “pothole blitzes” to handle the growing problem.

Most of the potholes are reported by calls to 311, the city’s service hotline, and take about two days to be filled after they are first flagged, de Blasio said. It usually takes a road crew only a few minutes to fill a pothole, though slightly longer when a novice mayor takes a turn.

“I enjoyed it,” said de Blasio. “I like it more than shoveling snow.”