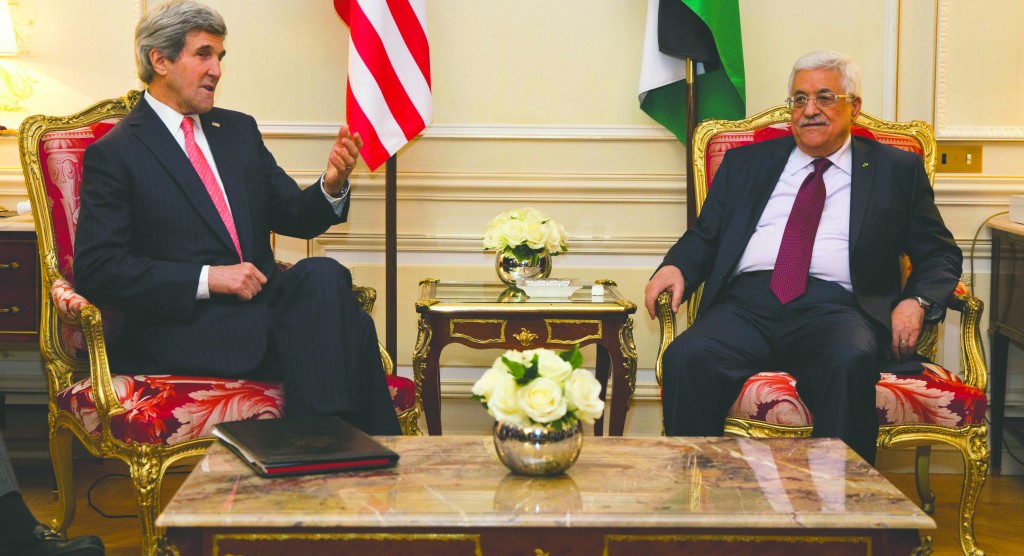 Secretary of State John Kerry expressed his “disappointment” to Palestinian Authority President Mahmoud Abbas over anti-Israeli rhetoric coming from the Palestinian side, The Jerusalem Post reported.

The two have been meeting in Paris to discuss the peace talks.

Israeli officials have denied and condemned the remarks, and the State Department voiced “concern over the recent comments.”

Abbas also reportedly reiterated his refusal to allow Palestinian recognition of Israel as a Jewish state included in the framework agreement Kerry has been preparing.

“They had an in-depth discussion about the core issues and agreed that it would be beneficial to continue that discussion Thursday,” said the official.

In Israel, the Prime Minister’s Office again refused to comment on negotiations, adhering to an agreement entered into by all parties when the talks were resumed in July to refrain from public comment.

Speaking on Israeli media on Thursday night, Kerry said that Israelis living over the Green Line might not have to evacuate their homes following a peace agreement with the Palestinians.

Asked what personal price the residents of Yehudah and Shomron will have to pay for peace, Kerry said, “I’m not at all certain they will have to leave their homes.”

In the interview, Kerry sought to show that, contrary to what his critics say, he understands the concerns of Israelis. He said he had “no argument with anybody in Israel who wants to say to me that no deal is better than a bad deal. I say that too. I’m not in the business of trying to put together a bad deal.”

“One thing I know a hundred thousand percent is that you can’t turn to the people of Israel with the prospect that what you are offering is going to turn [Yehudah and Shomron] into Gaza. Israel’s security is iron clad as a priority in this issue. And I have said that from day one.”

Kerry added that he was not asking Israelis to take a “leap of faith” in any agreement.

“My job is to help create a situation where the reality of the agreement is such that it is not such a leap of faith,” he said. “I don’t want this to be a leap of faith, but a leap of rationality and a choice based on a very understandable and tangible set of guarantees.”

Meanwhile, in response to a report that the U.S. has asked Israel to freeze construction in Yehudah and Shomron, 21 coalition MKs, including seven deputy ministers, wrote Prime Minister Binyamin Netanyahu Thursday night urging him not to agree to it, according to The Jerusalem Post.

“We strongly oppose any freeze of any kind, including outside the blocs,” the MKs wrote. “We would see such an Israeli commitment as burning bridges.”

The deputy ministers who signed the bill were Ze’ev Elkin, Danny Danon, Tzipi Hotovely, and Ophir Akunis of Likud, Faina Kirschenbaum of Yisrael Beiteinu, and Eli Ben-Dahan and Avi Wortzman of Jewish Home.