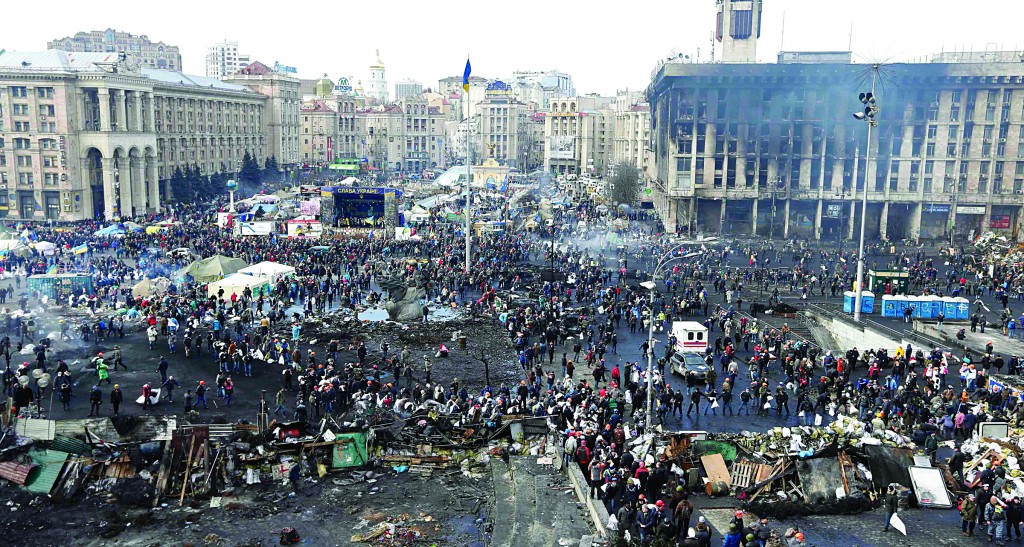 Fighting in Independence Square, which was recaptured by anti-government protesters, left the bodies of over 20 civilians strewn on the ground, a few hundred yards from where the president met the EU delegation.

Ministers from Germany, France and Poland shuttled through “a night of difficult negotiations” with him and the opposition, said EU officials.

Earlier in the day, riot police were recorded shooting from a rooftop at demonstrators in the plaza. Protesters hurled gasoline bombs and stones to drive security forces off a corner of the square police had captured two days ago.

The health ministry said 75 people had been killed since Tuesday afternoon, which meant at least 47 died in Thursday’s clashes.

The trio of EU foreign ministers met for four hours with Yanukovych and extended their stay until Friday to put a roadmap for a political solution to opposition leaders, after colleagues in Brussels imposed some targeted sanctions and threatened more if authorities failed to restore calm.

Vitaly Klitschko, an opposition leader, said he hoped for a deal overnight but added there was no clear result so far.

Putin “stressed the critical importance of an immediate end to bloodshed, the need to take urgent measures to stabilize the situation and suppress extremist and terrorist attacks” the Kremlin said — sharing Yanukovych’s view that he faces a coup.

The White House said Obama and Merkel agreed it was “critical” U.S. and EU leaders “stay in close touch in the days ahead on steps we can take to support an end to the violence and a political solution that is in the best interests of the Ukrainian people.”

The EU plan “offers a chance to bring an end to violence,” Polish Prime Minister Donald Tusk said in Warsaw, adding that Yanukovych was willing to hold rapid elections to parliament and the presidency — the latter something Yanukovych has so far appeared reluctant to consider, a year before his term ends.

Medics carried bodies on stretchers through lines of protesters who chanted “Heroes, heroes” to the dead.

“This is brother fighting brother,” said Irina, a local woman walking to Independence Square to donate syringes for blood transfusions. “We need to realize we’re all one people.”

In a sign of faltering support for Yanukovych, his hand-picked head of Kiev’s city administration quit the ruling party in protest at bloodshed in the streets. But core loyalists were still talking tough.

Interior Minister Vitaly Zakharchenko in a broadcast  statement, said police had been issued with combat weapons and would use them “in accordance with the law” to defend themselves — or to free 67 of their colleagues his ministry said were being held captive.

Demonstrators said captured police had been allowed to go.

Russia criticized European Union and U.S. actions, calling them “blackmail” that would only make matters worse. Putin dispatched an envoy to Kiev to join the mediation effort.

Ukraine is caught in a geopolitical tug-of-war between Moscow — which sees it as a market and ally and fears protests spreading to Russia — and the West, which says Ukrainians should be free to choose economic integration with the EU.

Raising pressure on Yanukovych to restore order if he wants another desperately needed loan, Russian Prime Minister Dmitry Medvedev said Moscow would not hand over cash to a leadership that let opponents walk over it “like a doormat.”

The crisis in the sprawling country of 46 million with an ailing economy and endemic corruption has mounted since Yanukovych took a $15-billion Russian bailout instead of signing a wide-ranging trade and cooperation deal with the EU.

Russia has held back a new loan installment until it sees stability in Kiev and has condemned EU and U.S. support of the opposition demands that Yanukovych, elected in a broadly fair vote in 2010, should share power and hold new elections.

Obama has rejected suggestions Ukraine is a pawn in a global confrontation with Moscow: “Our approach in the United States is not to see these as some Cold War chessboard in which we’re in competition with Russia,” he said on Wednesday.

In Lviv, a bastion of Ukrainian nationalism since Soviet times, the regional assembly declared autonomy from Yanukovych and his administration, which many west Ukrainians see as much closer to Moscow and to Ukraine’s Russian-speaking east.

Ukraine’s hryvnia currency, at its lowest levels since the global financial crisis five years ago, weakened again on Thursday.

Possibly from fear of sanctions, some of Ukraine’s richest magnates have stepped up pressure on Yanukovych to hold back on using force: “There are no circumstances which justify the use of force toward the peaceful population,” said Rinat Akhmetov, who bankrolled Yanukovych’s 2010 election campaign.