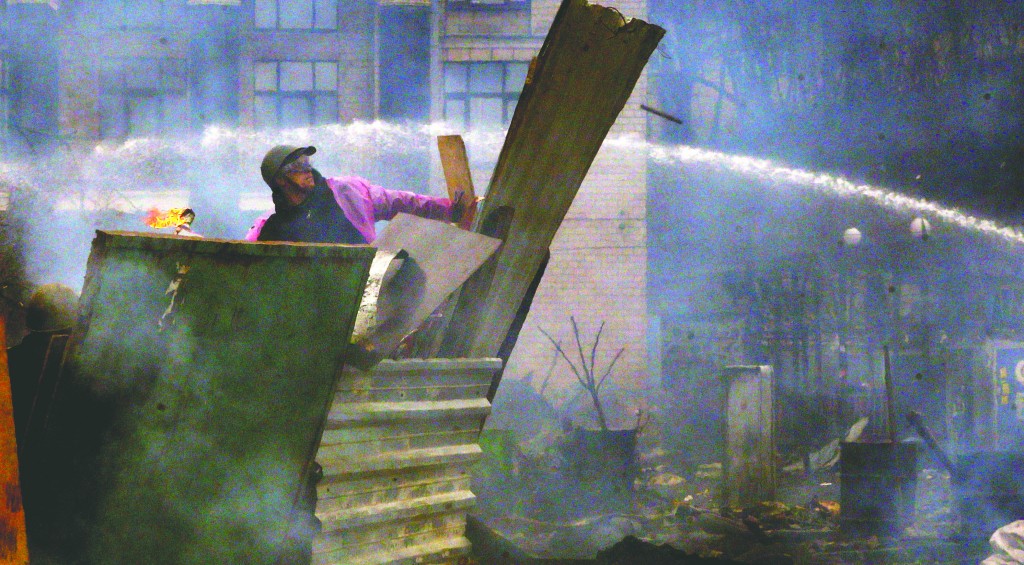 Ukraine’s embattled president and leaders of the protests that have been roiling the country agreed Wednesday on a truce to halt the violence that has killed 26 people and injured more than 425 others. A protest leader was quoted as saying the government pledged not to attack an opposition encampment in central Kiev while further negotiations unfold.

President Viktor Yanukovych met with opposition leaders and the two sides agreed to halt the violence and to hold talks on ending bloodshed, a statement on the presidential website said. The statement did not give any further details.

Vitali Klitschko, one of the leaders of the protests that have sought to keep Ukraine open to Europe and out of a close political and economic alliance with Ukraine, Russia, was quoted by the Interfax news agency as saying that Yanukovych agreed that there would be no attempt to storm the protesters’ encampment on the main square of downtown Kiev.

Flames from burning barricades of tires and refuse leapt into the air at the square for a second night, as protesters demanding Yanukovych’s resignation showed no signs of yielding.

The truce announcement came hours after the president replaced the army chief and the military vowed a national anti-terrorist operation to restore order. Officials have often referred to the protesters who have demanded Yanukovych’s resignation for months as “terrorists.”

The recent violence has been the worst in nearly three months of anti-government protests that have paralyzed Kiev. The two sides are locked in a battle over the identity of this nation of 46 million, whose loyalties are divided between Russia and the West. The protests began in late November after Yanukovych turned away from a long-anticipated deal with the European Union in exchange for a $15 billion bailout from Russia.

Political and diplomatic maneuvering has continued, with both Moscow and the West eager to gain influence over this former Soviet republic. Three EU foreign ministers — from Germany, France and Poland — were heading to Kiev on Thursday to speak with both sides before an emergency EU meeting back in Brussels to consider sanctions against those responsible for the recent violence in Ukraine.

President Obama also stepped in to condemn the violence in Kiev, warning Wednesday “there will be consequences” for Ukraine if it continues. The U.S. has raised the prospect of joining with the EU to impose sanctions against Ukraine.

On a visit to Mexico, Obama said the Ukrainian military should not step into a situation that civilians should resolve and added that the U.S. holds Ukraine’s government primarily responsible for dealing with peaceful protesters appropriately.

In Kiev, Ukraine’s top security agency accused protesters Wednesday of seizing hundreds of firearms from its offices and announced a nationwide anti-terrorist operation to restore order.

Demonstrators, meanwhile, forced their way into the main post office on Kiev’s Independence Square, also known as the Maidan, after a nearby building they had previously occupied was burned down in fierce, fiery clashes late Tuesday with riot police. Thousands of activists armed with fire bombs and rocks had defended the square, a key symbol of the protests.

“The revolution has turned into a war with the authorities,” Vasyl Oleksenko, a retired geologist from central Ukraine, said Wednesday. “We must fight this bloody, criminal leadership. We must fight for our country, our Ukraine!”

Before the truce was announced the bad blood was running so high it has fueled fears the nation could be sliding toward a messy breakup. While most people in the country’s western regions resent Yanukovych, he enjoys strong support in the mostly Russian-speaking eastern and southern regions, where many want strong ties with Russia.

Neither side had appeared willing to compromise, with the opposition insisting on Yanukovych’s resignation and an early election and the president apparently prepared to fight until the end.

Opposition lawmaker Oleh Lyashko warned that Yanukovych himself was in danger.

“Yanukovych, you will end like [Muammar] Gadhafi,” Lyashko told thousands of angry protesters. “Either you, a parasite, will stop killing people or this fate will await you. Remember this, dictator!”

Before the truce announcement, Yanukovych had blamed the protesters for the violence and said the opposition leaders had “crossed a line when they called people to arms.”

“I again call on the leaders of the opposition … to draw a boundary between themselves and radical forces, which are provoking bloodshed and clashes with the security services,” the president said in a statement. “If they don’t want to leave, they should acknowledge that they are supporting radicals.”

He called for a day of mourning Thursday for the dead.

In Moscow, the Kremlin said it put the next disbursement of its bailout on hold amid uncertainty over Ukraine’s future and what it described as a “coup attempt.”

French Foreign Minister Laurent Fabius told reporters that he and his counterparts from Germany and Poland would meet both sides in Ukraine ahead of the EU meeting on possible sanctions. He said he hoped the two sides “will find a way for dialogue.”

Possible sanctions include travel bans and asset freezes, which could hit hard the powerful oligarchs who back Yanukovych.

Ordinary Ukrainians, meanwhile, are struggling amid a stagnant economy and soaring corruption. They have been especially angered to see that Yanukovych’s close friends and family have risen to top government posts and amassed fortunes since he came to power in 2010. Yanukovych’s dentist son, Oleksander, has become a financial and construction magnate worth $187 million, according to Forbes Ukraine.

The latest bout of street violence began Tuesday when protesters attacked police lines and set fires outside parliament, accusing Yanukovych of ignoring their demands to enact constitutional reforms that would limit the president’s power — a key opposition demand. Parliament, dominated by his supporters, was stalling on taking up a constitutional reform to limit presidential powers.

On Wednesday morning, the center of Kiev was cordoned off by police, the subway was shut down and most shops on the main street were closed. But hundreds of Ukrainians still flocked to the opposition camp, some wearing balaclavas and armed with bats.

One group of young men and women poured petrol into plastic bottles, preparing fire bombs, while a volunteer walked by distributing ham sandwiches. Other activists were busy crushing the pavement into bags to fortify the barricades.

In the western Ukrainian city of Lviv, where most residents yearn for stronger ties with the EU and have little sympathy for Yanukovych, protesters seized several government buildings, including the governor’s office, police stations and offices for prosecutors, security officials and the tax agency. They also broke into an Interior Ministry unit and set it on fire.

In another western city, Lutsk, protesters handcuffed the regional governor, a Yanukovych appointee, and tied him on a central square after he refused to resign. In the city of Khmelnitsky, three people were injured when protesters tried to storm a law enforcement office.