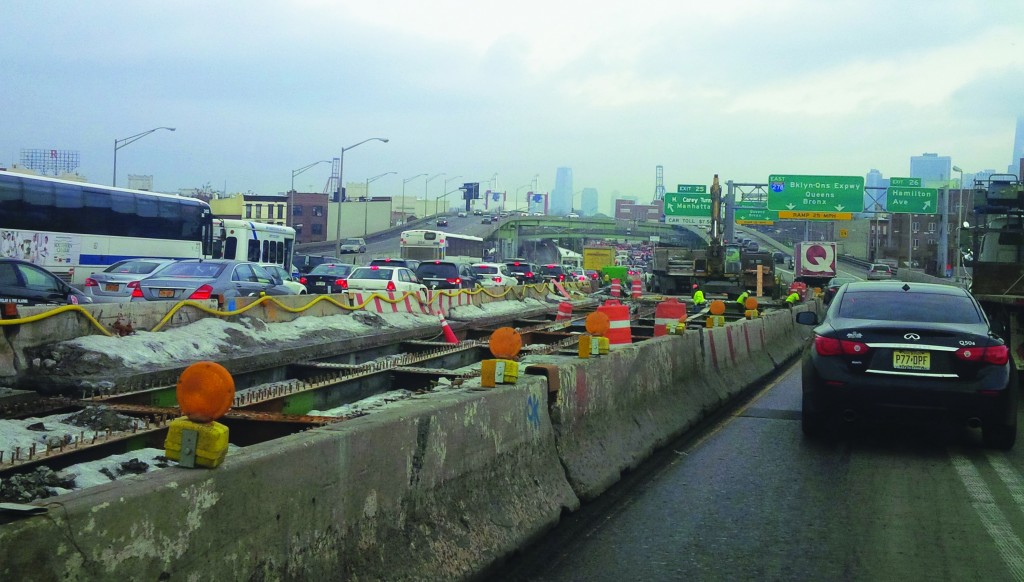 City dwellers facing one of the most brutal winters on record have been dealing with something far more dangerous than snow falling from the sky: ice tumbling from skyscrapers.

Streets around New York’s new 1 World Trade Center, the nation’s tallest building, were recently closed when sheets of ice were seen shearing from the face of the 1,776-foot structure — turning them into potentially deadly, 100-mph projectiles.

And sidewalks around high-rises have been cordoned off with yellow caution tape because of falling icicles and rock-hard chunks of frozen snow, a situation that experts warn could get worse over the next few days as a thaw sets in over much of the country.

“The snow starts to melt and the liquid drips off and makes bigger and bigger icicles, or chunks of ice that break off skyscrapers,” said Joey Picca, a meteorologist at the National Weather Service in New York, which has had 48.5 inches of snow this year, and several cycles of freeze and thaw.

“Be very, very aware of your surroundings,” he said. “If you see ice hanging from a building, find another route. Don’t walk under hanging ice.”

Some architects say newer, energy-efficient high-rises may actually be making the problem worse.

“They keep more heat inside, which means the outside is getting colder and that allows more snow and ice to form,” said engineer Roman Stangl, founder of the consulting firm Northern Microclimate in Cambridge, Ontario.

Stangl helps developers opt for shapes, slope angles and even colors — darker colors absorb more melting sunrays — to diminish ice formation. High-tech materials can also be used, such as at Tokyo’s Skytree observation tower, where heaters were embedded in the glass to melt the ice.

Such options are not always possible in older cities with balconies, awnings and stone details.

Barry Negron said he saw ice hanging perilously off a four-story building near Rockefeller Center last month and was trying to warn other pedestrians when he was hit in the face with a sharp, football-size chunk. Cuts across his nose and cheek required 80 stitches.

“I panicked because I saw blood on my hands, and more coming down,” said the 27-year-old salesman. As he lay on the pavement, “I heard two young ladies yelling, ‘Oh, my G-d, oh my G-d, help! There’s a lot of blood!’”

Since then, he’s nervous when he walks around the city and has seen other near-hits.

Exactly how many pedestrians are hit by falling ice is not clear, but dozens of serious injuries are reported annually. It’s a perennial problem in St. Petersburg, Russia, where dozens reportedly are injured or killed every year. Seven people were injured in 2011 near Dallas when huge sheets of ice slid off the roof of a stadium. Fifteen people were injured in 2010 by a shower of ice from the 37-story Sony Building on New York’s Madison Avenue.

Outside Chicago’s 100-story John Hancock Center last month, people scrambled with backpacks and purses over their heads to avoid falling ice. On Tuesday, signs warning pedestrians of falling ice stood outside nearly every skyscraper and other tall building in Chicago’s Loop as temperatures pushed above freezing. Last week near New York’s Carnegie Hall, chunks of ice tumbled onto cars and buses.

“This happens all over the country, all over the world, in cold climates,” said architect Chris Benedict, who accounts for ice buildup in designing structures.

New York City’s Department of Buildings has issued an alert asking building owners to clear dangerous buildups of snow and rope off sidewalks, and they have issued citations with a standard penalty of $1,000 for those failing to do so.

But even the simplest solutions can sometimes be problematic. After ice was seen falling from 1 World Trade Center earlier this month, officials closed a nearby street and the entrance to the underground PATH train station that links New York with New Jersey. That caused a logjam of thousands of commuters with nowhere to go.

Crews have been removing the accumulation of ice that formed on the 1 World Trade Center and on an external construction hoist that stretches from the ground to the 90th floor. A new covered entrance to the PATH station now protects commuters walking by.

“Hey, what do you want? It’s winter, that’s what happens — ice,” said Mike McKenna, a 38-year-old management consultant who was under 1 World Trade Center when the chunks first started flying.