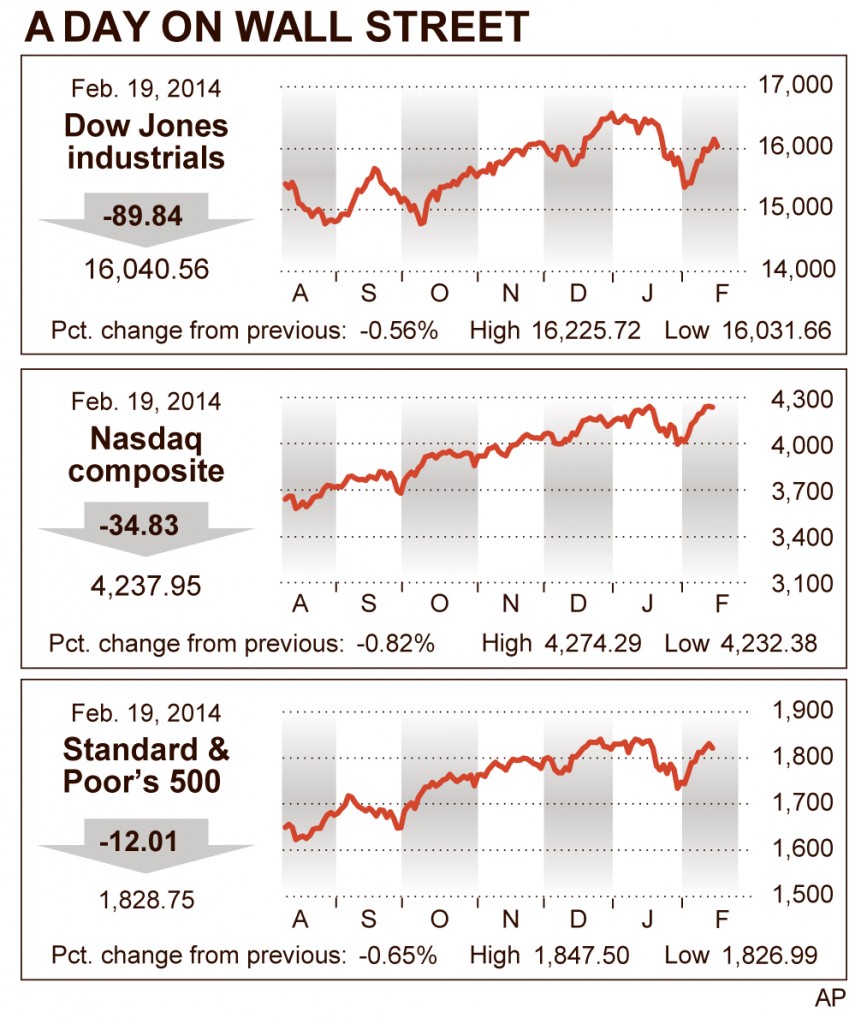 The market was mixed most of the day, then turned lower after 2 p.m., when the Fed released the minutes from its January policy meeting.

The minutes revealed that some policymakers “raised the possibility that it might be appropriate to increase the federal funds rate relatively soon.”

That came as an unwelcome surprise to many investors, who haven’t had to worry about increases in the Federal Reserve’s benchmark short-term interest rate for about five years.

“The working assumption among investors was that the Fed was going to keep short-term interest rates as low as possible for as far as the eye can see,” said Jack Ablin, chief investment officer at BMO Private Bank, which oversees $66 billion in assets.

The Federal Reserve has kept the federal funds rate, the interest banks charge each other to borrow money, near zero since December 2008 in an effort to support the U.S. financial system by keeping borrowing costs low. The rate has remained close to zero since then.

In more normal years, short-term interest rates were the Fed’s main tool for regulating the U.S. economy. Even small changes in its benchmark borrowing rate could have an impact throughout the economy by raising or lowering interest rates on many kinds of loans, including home mortgages and business loans. Since the financial crisis, the Fed has turned to less traditional ways of stimulating the economy, including the Fed’s current bond-buying program.

It’s unlikely that the Fed would raise interest rates soon, especially since the Fed is in the middle of winding down its bond-buying program. Newly installed Federal Reserve Chair Janet Yellen and her predecessor Ben Bernanke both repeatedly indicated that the central bank wouldn’t raise rates until 2015 at the earliest.

Nonetheless, the comments from Fed policymakers caught many investors off guard.

“Any time we hear ‘increase in rates,’ we listen,” said Jonathan Corpina, a trader on the floor of the New York Stock Exchange with Meridian Equity Partners.

Energy stocks were among the few sectors to close higher, helped by a surge in natural gas prices.

Natural gas jumped 60 cents, or 11 percent, to $6.15 per 1,000 cubic feet, the first time it’s been over $6 in four years. Natural gas has climbed sharply this year, due in large part to the cold weather that has plagued most of the country, leading to higher-than-usual demand.

Investors also reacted to the latest merger of name-brand companies Wednesday, this time in the jewelry industry.

The Zales-Signet combination is the latest in a series of notable deals that have been announced in the last few weeks. On Monday, pharmaceutical giants Forest Laboratories and Actavis announced they would merge in a $25 billion deal.

“I suspect we’ll see more M&A, with all the money these companies have on their balance sheets,” said Ian Winer, director of trading at Wedbush Securities.