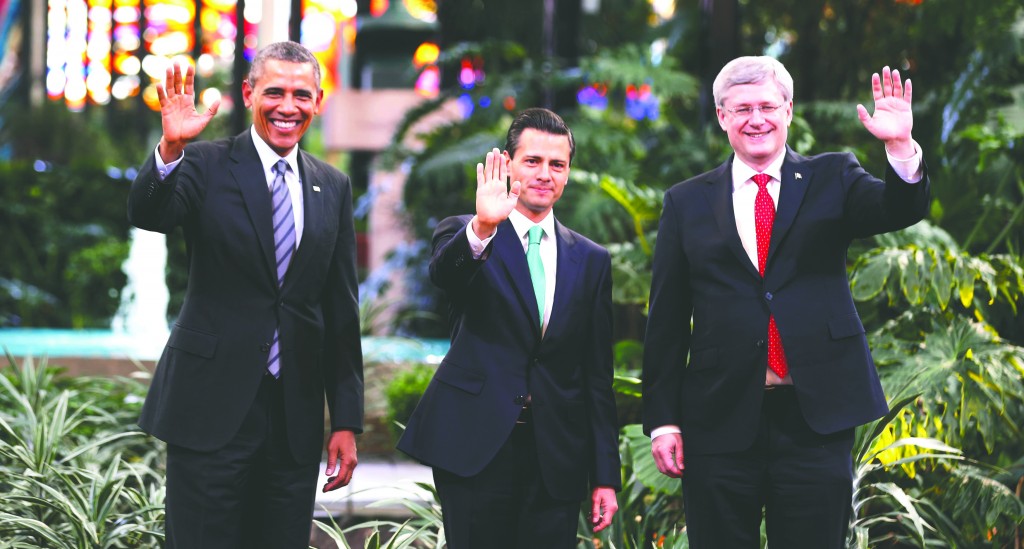 President Barack Obama headed into a summit Wednesday with Mexican and Canadian leaders eager to engage on issues of trade and other neighbor-to-neighbor interests, even as Congress is pushing back against some of his top cross-border agenda items.

Obama, flanked by his trade negotiator and secretaries of Commerce and Homeland Security, stepped off Air Force One and onto a red carpet in Toluca, near Mexico City, where an honor guard lined the walk to Obama’s limousine. At an ornate state government complex nearby, Obama was to meet with Mexican President Enrique Pena Nieto and Canadian Prime Minister Stephen Harper during the North American Leaders’ Summit.

The talks will highlight how increasingly interconnected the three economies are 20 years since the NAFTA took effect. But they will also illustrate the limits of Obama’s power, his hands tied on immigration by congressional Republicans and on trade by his fellow Democrats.

The summit also takes place against a backdrop of tensions surrounding revelations that the National Security Agency spied on Pena Nieto before he was elected and gained access to former Mexican President Felipe Calderon’s email system when he was in office.

To the North, Canadian leaders have voiced frustration at the amount of time the Obama administration has taken to decide whether to approve the Keystone XL pipeline that would carry oil from tar sands in western Canada 1,179 miles to Nebraska, where existing pipelines would then carry the crude to refineries on the Texas Gulf Coast.

The NSA and pipeline issues could surface in one-on-one talks that Obama plans to have with Pena Nieto and Harper on the summit’s sidelines but are not expected to be a factor in the broader, joint discussions among the three leaders.