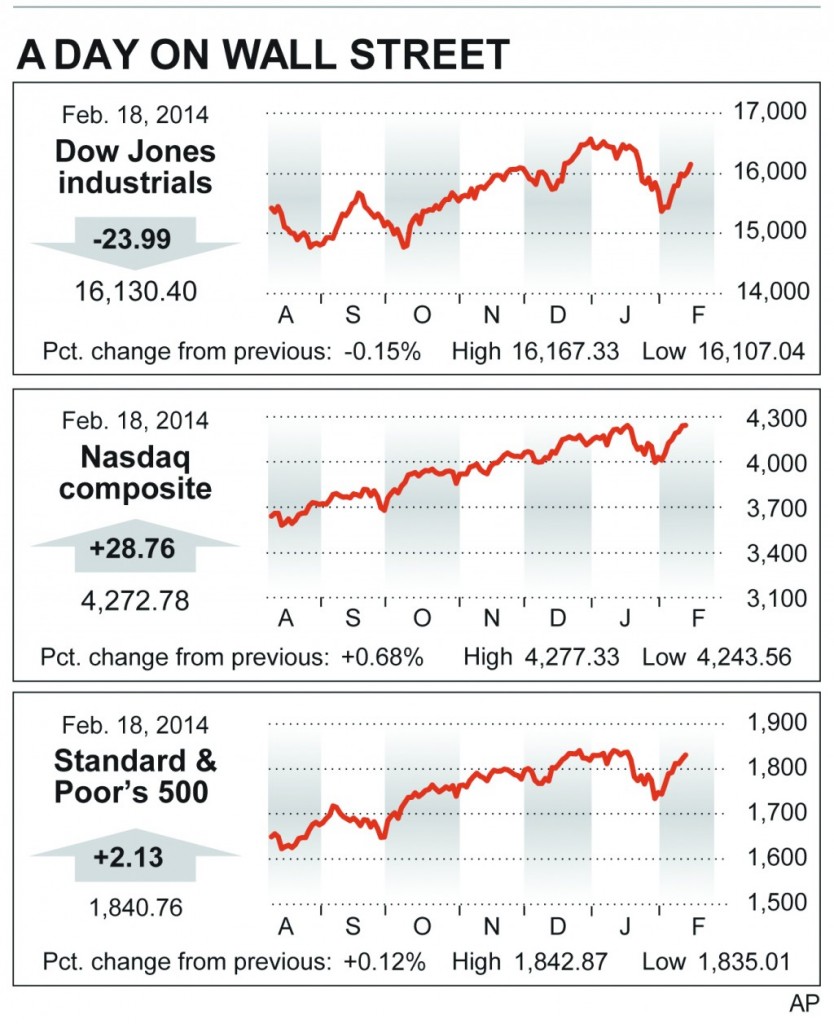 U.S. stocks closed mostly higher Tuesday as traders got back to work after a long weekend.

It was a fairly quiet day for investors, who had relatively little news to react to.

Health care stocks rose more than the rest of the market after pharmaceutical company Actavis said it was buying rival Forest Laboratories for $25 billion in cash and stock.

Investors liked the deal, which is intended to make the companies more competitive in a rapidly changing industry and allow them to command higher prices from insurance companies. Actavis makes the generic versions of hyperactivity disorder medication Concerta and the cholesterol drug Lipitor, while Forest Labs makes the Alzheimer’s treatment Namenda.

Coke reported that its income and sales fell in the fourth quarter compared with the same period a year ago. The company said sales volume declined 1 percent in North America, its largest market.

The Forest Labs-Actavis deal is the latest in big-name, big-budget deals to be announced so far this year. Last week cable giant Comcast announced a deal to buy Time Warner Cable for $45 billion and Japan’s Suntory Holdings announced last month it was buying Beam, the maker of Jim Beam and Maker’s Mark whiskey, for $13.9 billion.

“This has been building up for three or four years now,” he said. “Companies have so much money on their balance sheets and there’s only so much you can do with it. You could increase your dividend. You could buy back stock. You could spend it on [business investments], or you can do deals.”

The stock market is extending its gain from last week, when the S&P 500 increased 2.3 percent. Investors liked what they heard from Federal Reserve Chair Janet Yellen, who said she planned to continue her predecessor’s market-friendly policies for the time being.

The market’s turnaround last week was especially notable given the rough start to the year. The S&P 500 has risen seven out of the last eight days.

“I would be very surprised if we don’t see the market move back to its highs very soon,” said Randy Frederick, a managing director at Charles Schwab.

Investors had two minor economic reports on Tuesday to work through. Both suggested that the bitter winter weather that has enveloped much of the nation the last two months has been holding back the U.S. economy.

The New York Federal Reserve’s Empire State survey showed that manufacturing slowed in the region in February far more than economists expected. Meanwhile, a survey of the housing market showed homebuilder confidence fell sharply in February, due to the severe weather.

Bond prices rose. The yield on the 10-year Treasury note fell to 2.71 percent from 2.75 percent on Friday.