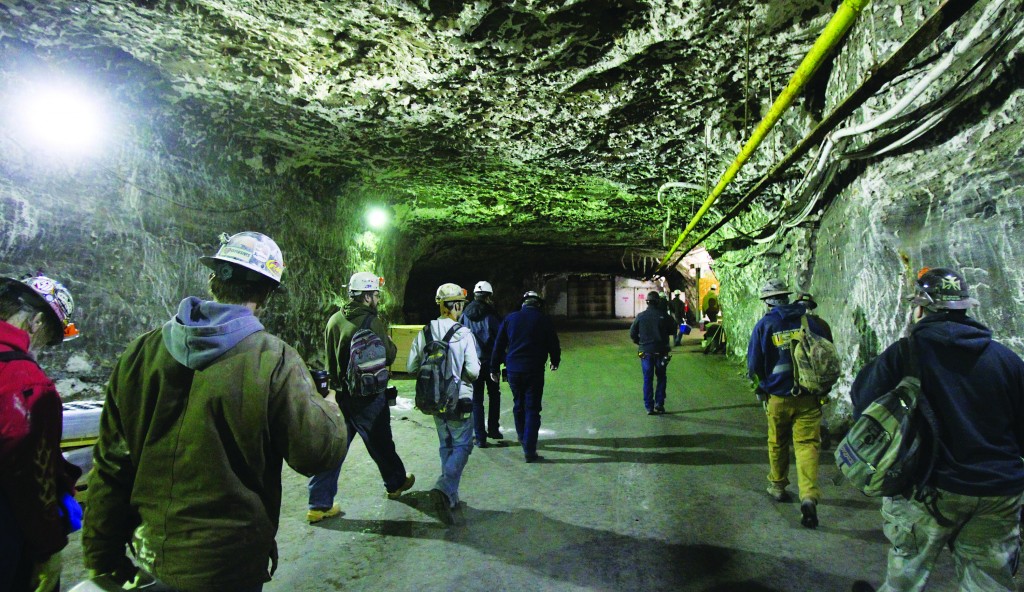 The story of this brutal winter may best be told 60 miles east of Buffalo, where a mine runs as deep as the Empire State Building is tall.

It’s here where you’ll find a couple hundred miners 1,300 feet below ground working nine-hour shifts, seven days a week to keep up with the nation’s voracious appetite for this season’s hottest commodity: Salt.

It’s been crucial for de-icing the thousands of miles of slippery roads this winter, whether you’re in Buffalo or Atlanta or somewhere in between.

Bucci, 69, is one of the owners of American Rock Salt, situated just off the I-390, a few miles from SUNY Geneseo.

The old mine in nearby Retsof collapsed in 1994, and when the Dutch owners decided not to rebuild, Bucci and partners Gunther Buerman and Neil Cohen opened American Rock Salt, bringing back the long, proud tradition to Livingston County.

Sitting atop a thick seam of salt that runs through to Ohio, American Rock Salt and its 10,000 acres of mineral rights is billed as the largest salt mine in the United States, producing more than 4 million tons a year. The mine will churn out salt for at least the next 80 years.

But this year, the problem is getting the salt out of the ground fast enough to meet pent-up demand from snowstorm after snowstorm pounding away at so many parts of the United States. That happened again just last week across the Northeast and South.

Less than three months ago, the company had 700,000 tons of salt stockpiled for the winter at its facility on Route 63. The salt reached as high as 80 feet and covered an area the size of 3 1/2 football fields.

Now, just as soon as the salt can be hoisted to the surface, there’s a tractor trailer or box car waiting to haul it away to customers scattered across New York and 11 other states throughout the Northeast and Midwest.

Even the most prepared communities are ordering tons more salt to get through this winter, only to find they need to get in line. The price has also gone up 20 percent per ton, said Thomas Best, highway superintendent in Hamburg, a longtime customer.

Sales at American Rock Salt have skyrocketed anywhere from 50 to 75 percent after the past two years with mild winters. Last week, the plant had 1,000 calls from customers — and that was on Monday alone.

“This,” said plant manager Greg Norris, “is the winter from Heaven.”

It all means the 310 union laborers and supervisors at the mine are working around the clock in three shifts to crank up supply. As of Friday, they were on their 44th straight day of work.

Sundays are double-time — one of the reasons prices have gone up — and the fat paychecks will easily push many union salaries above $60,000 this year.

Layoffs are unlikely this summer, too. American Rock Salt will need a full slate of workers to replenish its stockpiles both at this site and in 22 locations across the Northeast.

But working in the salt mines is a tough line of work. And as Bucci well knows there are dangers down below in the darkness.

His father was killed 40 years ago in a methane explosion at the mine in Retsof.

Down below, the temperature stays a consistent 58 degrees year round, and you can taste the salt that’s in the air and on your clothes. The tunnels measure 55 feet wide and 14 feet high, and it’s a little like working in a warehouse with no windows, said Lee McKinney, 40, the mine’s safety coordinator.

The underground tunnels meander for miles like a sprawling maze and there are dozens of all-terrain vehicles and heavy equipment that had to be squeezed down the shaft — some piece by piece — to help the miners get around and do their jobs.

Chamber by chamber, holes are drilled to drop in the explosives and the blasts are done nightly on second shift. Each blast advances the mine another 10 feet and deposits 420 tons of salt.

Large chunks are scooped up by load-haul dump trucks, then ground down enough by machine to be pushed onto the automated conveyor belt winding through the mine.

The chunks of salt on the conveyor belt eventually find their way to a part of the mine where it’s crushed down to quarter-inch size and screened. That’s where you’ll find John “Bullet” Stoddard, who was perched inside a tiny shed monitoring the process on a computer monitor.

Working nine hours a day underground isn’t for everyone, but Stoddard likes it. He’s worked in the salt mines for 14 years.

“I was a landscaper for years,” he said. “There’s no bugs down here. You don’t have to swat flies.”

From below, the salt goes into two huge containers operated by an automated pulley that alternately hoists them up and down a second shaft every 76 seconds.

The salt makes its way onto another conveyer belt where it can be dumped through chutes onto the ground.

Or into the waiting trucks below.