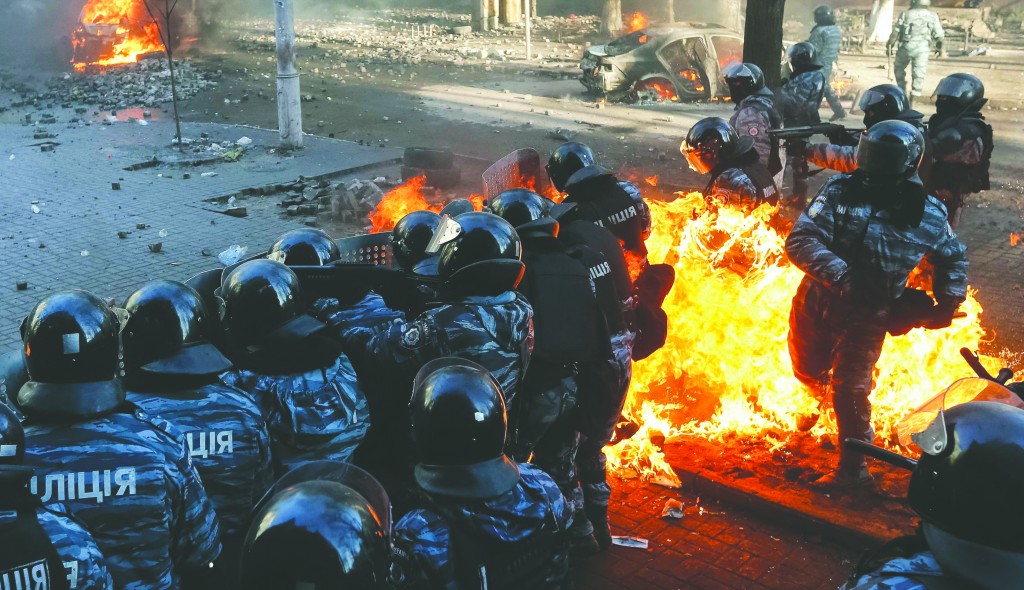 Amid cries of “Glory to Ukraine!” and with flaming tires lighting up the night sky, thousands of riot police armed with stun grenades and water cannons attacked the sprawling protest camp in the center of Kiev on Tuesday, following a day of street battles that left 18 people dead and hundreds injured.

The violence was the deadliest in nearly three months of anti-government protests that have paralyzed Ukraine’s capital in a struggle over the nation’s identity.

With the boom of exploding stun grenades and fireworks nearly drowning out his words at times, opposition leader Vitali Klitschko urged the 20,000 protesters to defend the camp on Independence Square that has been the heart of the protests.

“We will not go anywhere from here,” Klitschko told the crowd, speaking from a stage in the square as tents and tires burned around him, releasing huge plumes of smoke. “This is an island of freedom and we will defend it,” he said.

Many heeded his call.

“This looks like a war against one’s own people,” said Dmytro Shulko, 35, who was heading toward the camp armed with a fire bomb. “But we will defend ourselves.”

As police dismantled some of the barricades on the perimeter of the square and tried to push away the protesters, they fought back with rocks, bats and fire bombs. Against the backdrop of a soaring monument to Ukraine’s independence, protesters fed the burning flames with tires, creating walls of fire to prevent police from advancing. A large building the protesters had used as a headquarters caught fire and many struggled to get out.

Speaking over loudspeakers, police urged women and children to leave the square because an “anti-terrorist” operation was underway.

The protesters appeared to sense that Ukraine’s political standoff was reaching a critical turning point. As the tents and also some tires went up in flames, defiant protesters shouted “Glory to Ukraine!” and sang the Ukrainian national anthem.

Shortly before midnight, Klitschko headed to President Viktor Yanukovych’s office to try to resolve the crisis, his spokeswoman said.

Earlier in the day, protesters attacked police lines and set fires outside Parliament, accusing Yanukovych of once again ignoring their demands and dragging his feet on a constitutional reform to limit presidential powers.

Tensions had soared after Russia said Monday that it was ready to resume providing the loans that Yanukovych’s government needs to keep Ukraine’s ailing economy afloat. This raised fears among the opposition that Yanukovych had made a deal with Moscow to stand firm against the protesters and would choose a Russian-leaning loyalist to be his new prime minister.

The protests began in late November after Yanukovych turned away from a long-anticipated deal with the European Union in exchange for a $15 billion bailout from Russia. The political maneuvering continued, however, with both Moscow and the West eager to gain influence over this former Soviet republic.

Until Monday, the government and the opposition had appeared to be making some progress toward resolving the political crisis peacefully. In exchange for the release of scores of jailed activists, protesters on Sunday vacated a government building that they had occupied since Dec. 1.

Russia also may have wanted to see Kiev remain calm through the Winter Olympics in Sochi, so as not to distract from President Vladimir Putin’s games. But after the outburst of violence against riot police, Yanukovych’s government may have felt it had no choice but to try to restore order. 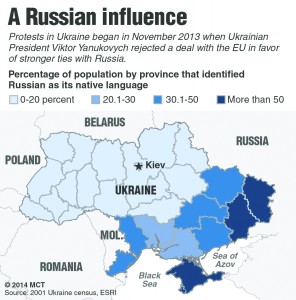 While Kiev and western Ukraine have risen up against Yanukovych, he remains popular in the Russian-speaking eastern and southern regions, where economic and cultural ties with Russia are strong.

As darkness fell, law enforcement agencies vowed to bring order to the streets and they shut down subway stations in the center of the capital. In Independence Square, priests prayed for peace.

“We see that this regime again has begun shooting people; they want to sink Ukraine in blood. We will not give in to a single provocation,” opposition leader Arseniy Yatsenyuk told the protesters. “We will not take one step back from this square. We have nowhere to retreat to. Ukraine is behind us, Ukraine’s future is behind us.”

Tuesday’s clashes were the first to lead to deaths since Jan. 22, when two protesters were hit with live ammunition and a third died after a fall.

As angry protesters outside parliament hurled stones at police and set trucks blocking their way on fire, riot police retaliated with stun grenades and fired what appeared to be small metal balls, as smoke from burning tires and vehicles billowed over Kiev.

On Wednesday morning, Feb. 12, government agencies said 18 people died in the violence, including seven policemen who died from gunshot wounds. Eleven civilians also died, including three who were shot. Hundreds of police and civilians were injured.

The coordinator for the opposition’s medical response team, Oleh Musiy, said more than 400 protesters were injured. He also claimed that about 20 had died, but this could not independently be confirmed.

One of the civilians was found dead after protesters stormed the office of the president’s Party of Regions. Police pushed them away, but when firefighters arrived to put out a fire, they discovered the body of an office employee, Kiev’s emergency services said.

Justice Minister Olena Lukash, a close Yanukovych aide, accused the opposition of violating earlier agreements with the government and blamed protest leaders for the violence.

U.S. Secretary of State John Kerry urged both sides to end the violence, halt their ultimatums and hold high-level talks.

U.S. Ambassador Geoffrey R. Payatt also threatened both sides with sanctions. “We believe Ukraine’s crisis can still be solved via dialogue, but those on both sides who fuel violence will open themselves to sanctions,” Payatt said on Twitter.

Germany has refused to back Washington’s calls for sanctions against Ukraine’s government to pressure it into accepting opposition demands for reforms.

But when central Kiev exploded in violence Tuesday, German Foreign Minister Frank-Walter Steinmeier said Ukrainian security forces have a “particular responsibility” to de-escalate the situation, adding that the EU might resort to unspecified sanctions against individuals. “Whoever is responsible for decisions that lead to bloodshed in the center of Kiev or elsewhere in Ukraine will need to consider that Europe’s previous reluctance for personal sanctions must be rethought,” he said.

The Russian Foreign Ministry blamed the West for the escalation of the violence and called on the opposition to work with the government to find a way out of the crisis.

“What is happening is a direct result of the conniving politics of Western politicians and European bodies,” the ministry said in a statement.