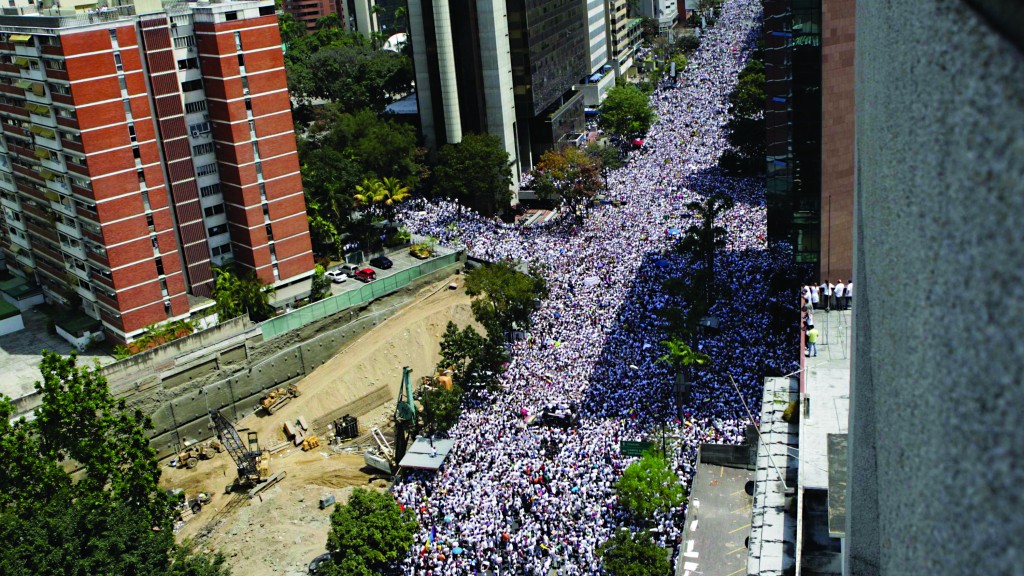 Tens of thousands of protesters flooded the streets of Venezuela’s capital on Tuesday after troops arrested opposition leader Leopoldo Lopez on charges of fomenting unrest against the government and violence that has killed at least four people.

White-clad demonstrators blocked traffic in the streets of Caracas as a security vehicle holding the 42-year-old Harvard-educated economist crawled at a snail’s pace after he surrendered to security forces during an opposition rally.

Lopez’s arrest could galvanize the opposition and spur more street demonstrations against President Nicolas Maduro, though there is no immediate sign the protests will topple the socialist leader.

“I have nothing to hide,” Lopez told supporters before his arrest, standing next to a statue above the crowd.

Minutes later, he surrendered to army officers, pumping his fist and then stepping into the military vehicle with a Venezuelan flag in one hand and a white flower in the other.

“I present myself to an unjust judiciary … May my jailing serve to wake up a people,” he added in the speech.

Lopez, wanted on charges including murder and ‘terrorism,’ says he is being made a scapegoat by a dictatorial government.

From inside the military vehicle, he called on demonstrators to clear the way so authorities could take him into detention. As protesters chanted “Leopoldo, the people are with you,” he was transferred to a black van and driven away.

His supporters followed for several miles until he was taken into a military base, with police shutting off access to numerous avenues on the way to control the crowd.

Demonstrators remained congregated on the outskirts of the La Carlota air base in eastern Caracas, and elsewhere.

Information Minister Delcy Rodriguez said that a Caracas textile worker was shot dead on Tuesday by “violent groups” seeking to carry out a coup planned by the United States. Authorities did not respond to requests for additional information.

In the coastal town of Carupano in eastern Venezuela, residents said a 17-year-old student died after being struck by a car during a demonstration against the socialist government.

That added to three fatal shootings in Caracas last Wednesday.

Student-led protests have multiplied this month across the nation of 29 million people in the biggest challenge to Maduro since his election last year following socialist leader Hugo Chavez’s death.

The demonstrators are demanding Maduro’s resignation and expressing a litany of complaints from inflation and violent crime to corruption and product shortages.

“The country’s in an unsustainable state,” said filmmaker Jose Sahagun, 47, wearing white like many among the thousands of demonstrators with Lopez in east Caracas.

“The government’s mask has fallen off. This man [Maduro] has held power for 10 months and the deterioration has been fast.”

Protest numbers had been relatively small but that changed on Tuesday with Lopez supporters swarming into the streets.

There has been no evidence that Venezuela’s military might turn against Maduro, the 51-year-old successor to Chavez.

Thousands of oil workers and Maduro supporters, clad in the red of the ruling Socialist Party, held their own demonstration in Caracas on Tuesday, music blaring in a party atmosphere.

In a nation split largely down the middle on political lines, ‘Chavistas’ have stayed loyal to Maduro despite unflattering comparisons with his famously charismatic predecessor. Many Venezuelans fear the loss of popular, oil-funded welfare programs should the socialist lose power.

Complaints about acts of violence by both sides have piled up over six consecutive days of confrontations between police and demonstrators. Only 13 students were reported still being held after nearly 100 arrests in the past week.

Opposition activists say some of those detained have been tortured, but Maduro says police have been restrained in the face of provocation and attacks.

He has, however, publicly criticized the Sebin national intelligence service for having agents in the street and replaced its head on Tuesday.