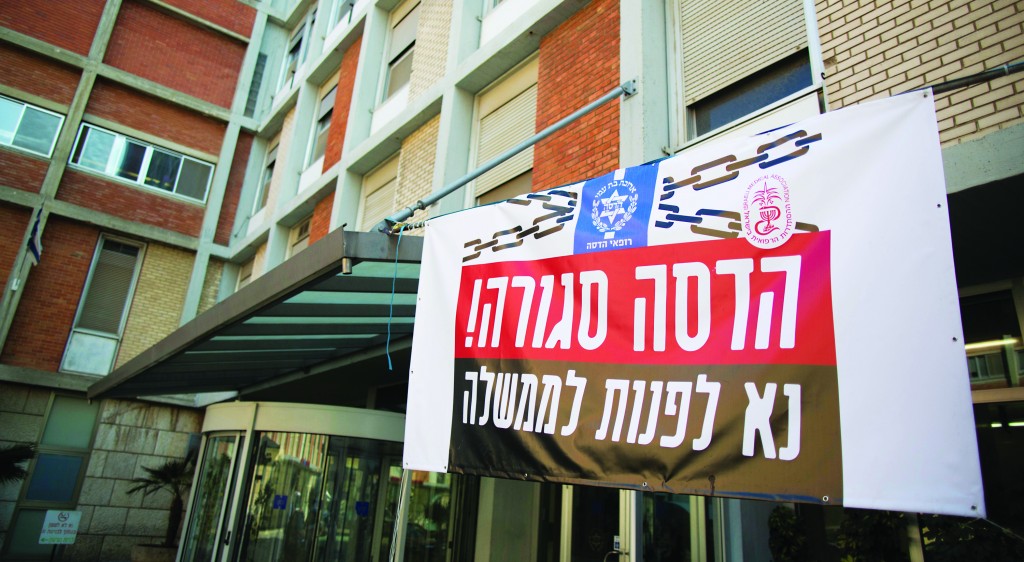 Striking Hadassah hospital staff stepped up their struggle to obtain back pay on Tuesday as they prepared for an overnight sit-in the courtyard of the Yerushalayim Ein Kerem medical center to dramatize their grievances.

Hundreds of Hadassah Medical Organization employees ate supper on Tuesday night in the center’s new lobby, and said they would not leave until the dispute is resolved.

“We will be here until further notice. Wednesday morning no administrator will be able to enter,” declared Amnon Bruchian, head of the workers’ committee, according to Ynet.

The government hasn’t backed down, however.

Health Minister Yael German and ministry director-general Prof. Ronni Gamzu told staffers in Ein Kerem on Tuesday that if they do not return to work immediately and restart negotiations, the government will turn to the courts to obtain a back-to-work order.

German said they wanted to speak to the committees and make them understand that the only “captain” at HMO is its director-general Avigdor Kaplan.

“I found devoted workers who love Hadassah,” German said afterwards. “I asked them to join hands to restore Hadassah to regular activities and accept the recovery program, because the solution is not in the hands only of the government but also in the workers’ hands.”

The Histadrut said that the 6,000 employees have turned into “hostages of HMO and forced to pay time and again the price of the failures of management.”

The Knesset Labor, Social Welfare and Health Committee planned to convene an unusual on-site session at Ein Kerem on Wednesday morning to discuss the crisis.