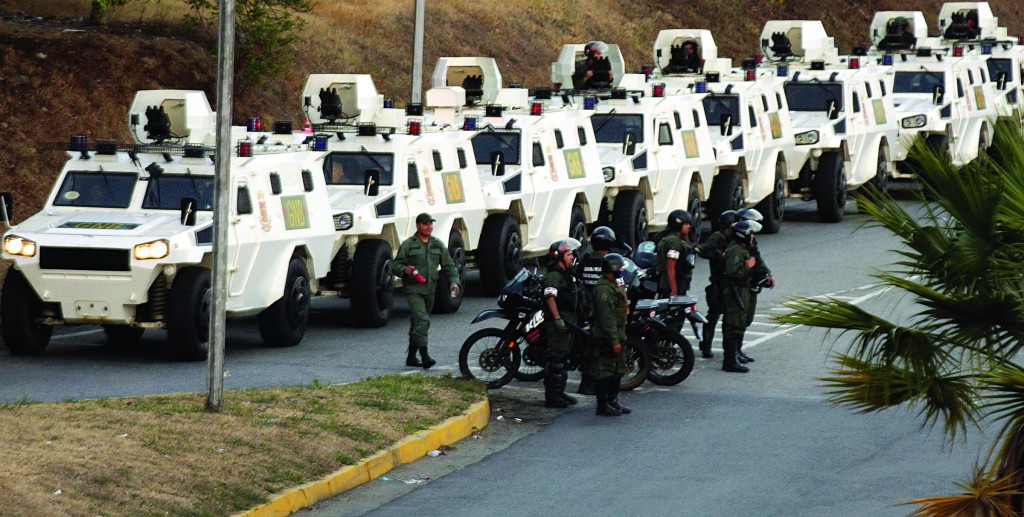 The announcement by Foreign Minister Elias Jaua came amid fears that renewed clashes could erupt Tuesday when both pro- and anti-government activists have announced plans for demonstrations in the capital.

Foreign Minister Elias Jaua said that the senior U.S. consular officers were trying to infiltrate Venezuelan universities, the hotbed of the recent unrest, under the cover of doing visa outreach. Repeating charges by Maduro, who has expelled American diplomats twice before, Jaua said that the U.S. is conspiring with opposition leader Leopoldo Lopez and student activists in an attempt to oust the socialist president.

The U.S. has denied the charges but is expressing concern about rising violence that led to three deaths last week during anti-government demonstrations, and about the government’s attempts to block peaceful protests.

Secretary of State John Kerry said Saturday that Lopez’s arrest would have a “chilling effect” on Venezuelans’ right to free expression.

More than 1,000 students, who have spent the past week on the streets alternating between peaceful protests by day and battles with police at night, marched on Monday to Venezuela’s telecommunications regulator to demand it lift all restrictions on the news media’s coverage of the unfolding political crisis. There were no reports of new disturbances.

Several journalists were harassed and detained, and Colombia’s news channel NTN24 was taken offline, while covering protests Wednesday that ended in a battle between student demonstrators and security forces backed by armed pro-government militias.

Three people were killed — two students and a pro-government demonstrator. News videos and photographs taken at the time indicate that at least one of the students was killed when militias fired directly at protesters.

Maduro accuses Lopez of being behind the violence and the head of a “fascist” plot to overthrow him two months after his party’s candidates won mayoral elections by a landslide. In a rally with thousands of supporters Saturday Maduro dared Lopez, a Harvard-trained former mayor, to turn himself in after a court ordered his arrest on charges ranging from vandalism of public property to homicide.

Lopez said that he doesn’t fear going to jail to defend his beliefs. In a video message Sunday, he called on supporters to march with him in white shirts to the Interior Ministry, where he’ll deliver a petition demanding the government protect citizens’ rights to peacefully protest.

“I haven’t committed any crime,” said Lopez, who hasn’t been seen in public since a Wednesday night news conference after the bloodshed. “If there is a decision to legally throw me in jail I’ll submit myself to this persecution.”