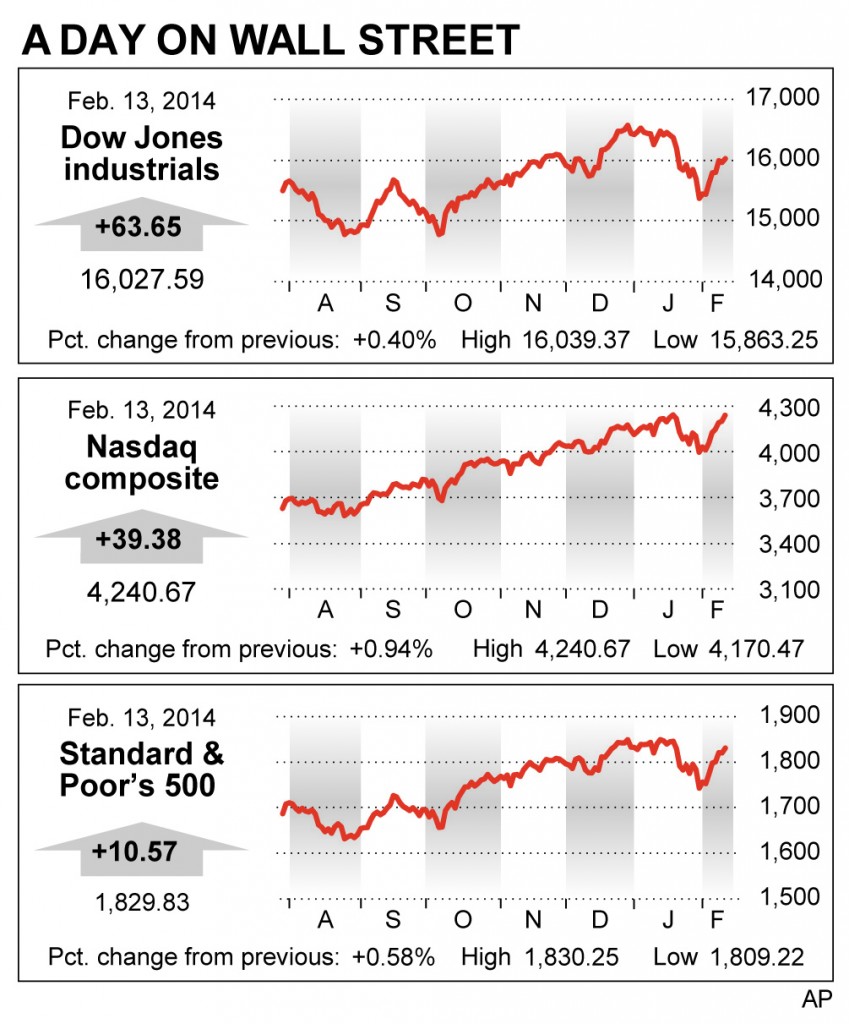 Investors’ focus has returned to company earnings after concerns about growth in emerging markets and the health of the U.S. economy pushed the Standard & Poor’s 500 index to its lowest level in more than three months at the start of February. Analysts at S&P Capital IQ expect that earnings at companies in the index increased last quarter at the fastest pace in a year.

Stocks also got a lift from deal news.

The biggest gains in the S&P 500 were posted by utility companies. Gains in these stocks suggest investors are looking to play it safe. Utilities don’t have the best growth prospects, but they pay steady dividends and operate in stable industries.

A separate report showed that cold weather caused U.S. retail sales to drop in January as Americans spent less on autos and clothing and at restaurants during a brutally cold month. The Commerce Department says retail sales fell 0.4 percent last month, the second straight decline after a 0.1 percent drop in December.

CBS rose $2.76, or 4.5 percent, to $64.61 after reporting fourth-quarter earnings and revenue growth that beat Wall Street’s expectations. Advertising revenue was flat, but there was growth in content licensing.

Despite the recent signs of stabilization, the stock market is still going through a pullback driven largely by the Federal Reserve’s decision to cut back on its economic stimulus program, said Barry Knapp, the head of U.S. equity portfolio strategy at Barclays.

The stimulus underpinned the stock market’s rally last year, but policy makers have reduced it at each of their last two meetings. The Fed has scaled back its bond purchases from $85 billion a month to $65 billion a month.

— Whole Foods dropped $4, or 7.2 percent, to $51.46 after the grocery chain reported fiscal first-quarter profit and revenue that came in below analysts’ forecasts. The company, known for its organic and natural food offerings, also lowered its earnings projections for the year again as the company faces more and more competition.

— Cisco Systems fell 58 cents, or 2.5 percent, to $22.27, after the company reported late Wednesday that weaker revenue and special charges weighed down its second-quarter earnings.