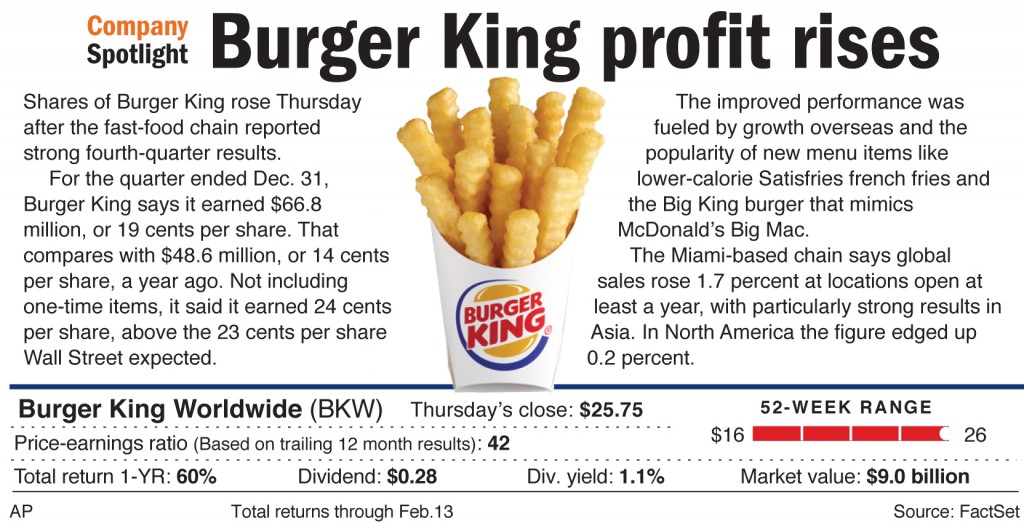 Burger King and other fast-food chains have been facing diners constrained by the economy and a storm-filled winter, along with tough competition from higher-priced quick-service restaurants like Chipotle. In response, Burger King has introduced new menu items and pushed deals.

The Miami-based chain says global sales rose 1.7 percent at locations open at least a year, with particularly strong results in Asia. In North America, the figure edged up 0.2 percent.

By comparison, McDonald’s said the figure declined 1.2 percent in the U.S., while Wendy’s reported a 3.1 percent increase.

Burger King Worldwide Inc. introduced the low-calorie product with great fanfare in September. It has about 20 percent fewer calories than the chain’s regular fries.

the fries also show Burger King’s commitment to developing new products, and are just one of the new menu creations since the chain was purchased and taken private by 3G Capital, a Brazilian private investment firm. In 2012, 3G unveiled a revamped menu before announcing a deal to take the chain public again.

The sale of company-owned restaurants to franchisees led to lower revenue, $265.2 million, compared with the $268.2 million analysts had been expecting. Such refranchising reduces corporate revenue because the company records only the fees the franchisee pays rather than the total restaurant sales.