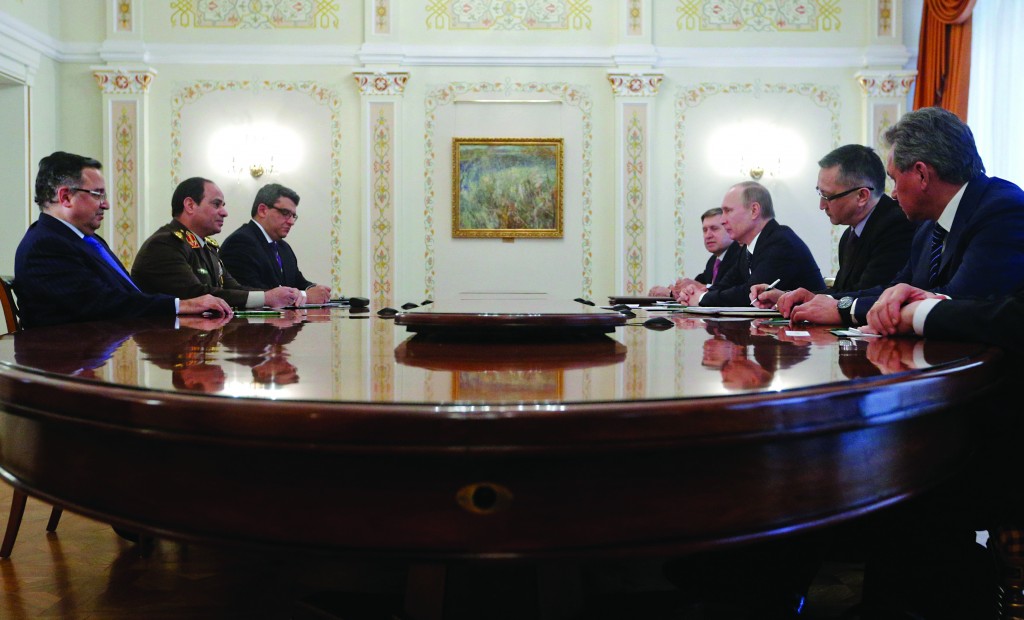 On Thursday, De facto Egyptian leader Field Marshal Abdel Fattah el-Sisi and Egyptian Foreign Minister Nabil Fahmymade a rare high-level visit to Moscow in an apparent bid to “diversify” Cairo’s diplomatic allegiances. Egypt enjoyed close ties with the former Soviet Union during the 1950s and ’60s, but for the last four decades has been dependent on U.S. aid.

Since el-Sisi led a military coup to depose president Mohammed Morsi last summer, the Obama administration has withheld much of the annual $1.5 billion in military assistance traditionally supplied to Cairo.

Putin’s reception of el-Sisi and Fahmy seemed intended to send a message to the West that the Kremlin still has influence in Egypt and appears ready to supply el-Sisi’s interim government with air defense systems and other military hardware that Cairo had previously looked to Washington to provide.

The Russian arms deal in the works is reportedly to be financed by Saudi Arabia and the United Arab Emirates. Together with other Arab nations around the Persian Gulf have they promised $12 billion in aid to Egypt in support of the military ousting of Morsi and the Muslim Brotherhood, which grew powerful during his year in office.

In the excerpts of the Kremlin meeting, Putin and el-Sisi expressed their mutual admiration and interest in boosting economic and military cooperation. Putin wished el-Sisi success in the forthcoming election.

Putin described the relationship between Egypt and Russia as one of “long, traditional and in the full sense of the word historic partners” and based on “the undeniable sympathy our peoples have for each other,” according to a Kremlin transcript of the meeting.