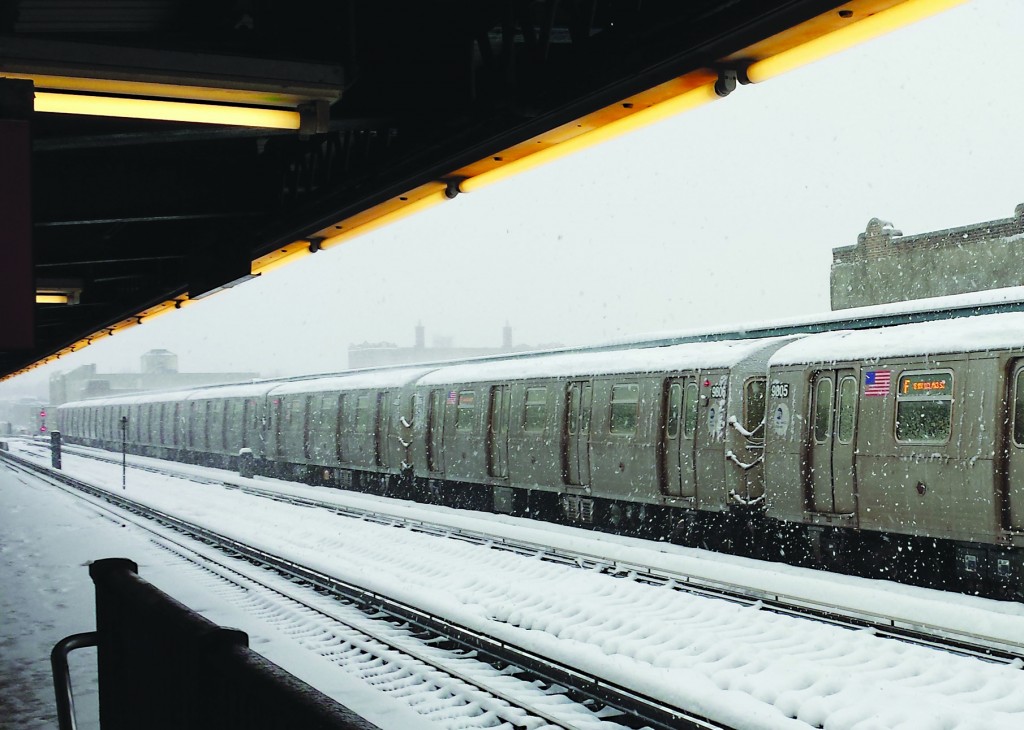 Mayor Bill de Blasio faced his most withering press conference of his young mayoralty Thursday afternoon, with questions on his decision to keep the largest school system in the nation open even as more than eight inches of  snow fell at a rapid clip.

“Given the information we had, it was right to go ahead with school,” de Blasio said. “It’s not something you do lightly, to close school.”

Some yeshivos such as Yeshivah and Mesivta Torah Vodaath and many Lakewood yeshivos had regular classes but sent the children and bachurim home early as the snow intensified. Others such as Bais Brocho in Boro Park, Beis Dovid and Beis Rochel in Monsey and most of Lakewood’s girls’ schools, announced early Thursday morning that there would be no school.

Some yeshivos announced a raffle for talmidim who learn. Every half hour of learning entitled a student to an additional ticket in Beis Dovid, which is known for never closing its doors.

Weather forecasters had predicted a monster storm for Thursday, which was a factor in the school closures across New York and New Jersey. Monsey Trails made the rare decision Wednesday to ground its buses. And Monsey supermarkets were open until late Wednesday to accommodate Shabbos shoppers who would not be able to leave their houses.

Responding to a dozen questions about his decision to keep the public school open, De Blasiohimself a school parent,
said that he was in touch with the National Weather Service, who were not sure how much snow will fall.

Other meteorologists, particularly NBC’s Al Roker, said that most weather predictors had said hours before the storm started Wednesday night that it would be a heavy storm.

De Blasio responded to Roker at his press conference, saying, “It’s a different thing to run a city than to give the weather on [the media]. So I am comfortable with our decision-making.”

Michael Mulgrew, the head of the teachers’ union, also criticized the decision as unwise.

“I understand the desire to keep schools open. The only thing that trumps that is safety,” Mulgrew said in a statement. “Having students, parents and staff traveling in these conditions was unwarranted. It was a mistake to open schools today. “

De Blasio, who urged all discretionary driving off the road, said that the decision was made in light of the fact that there are students who would not get a hot meal and a safe environment if not for school. Additionally, parents who have to go to work rely on school to keep their children safe.

But almost every other school district in the region was closed.

By noon, the storm had brought 9 1/2 inches to Central Park and as much as 14 inches was reported on Long Island, said National Weather Service meteorologist Joe Picca. He said even more snow was forecast to hit the city Thursday night into Friday morning, after the precipitation switched to rain or ice for a while. On Shabbos another storm is expected to bring another few inches.

During a brief lull in the storm during de Blasio’s news conference, Schools Chancellor Carmen Farina said, “It is totally a beautiful day out there right now.” Soon it was sleeting again.

In Bay Ridge, Brooklyn, an expectant woman was struck and killed by a private snowplow, the second weather-related death this winter in the Big Apple. Her baby was delivered in critical condition via caesarean section.

Min Lin, 36, was loading groceries into the trunk of her car with her husband when she was struck by a mini-snowplow. She was rushed by paramedics to nearby Maimonides Medical Center where she was pronounced dead.

The expected daylong Nor’easter brought heavy snow to a region already heavily blanketed in white. The weather service warned of “near-blizzard conditions,” and Gov. Andrew Cuomo declared a state of emergency for the area including New York City, Long Island and the Hudson Valley. The state barred commercial traffic from Interstate 84 between the Connecticut and Pennsylvania lines, and Cuomo urged residents to “stay off the roads and remain in their homes.”

There was no immediate word on school attendance figures, but New York City public schools’ preliminary attendance was just 47.1 percent on Jan. 22, another day that schools were open despite heavy snow. That was the lowest number in several years, according to the city’s Department of Education.

“It’s our job to make that decision and make that notice as quickly as we can,” the mayor said Thursday. The decision was made Wednesday night, although in the past it has come as late as 4 a.m.

“The storm moved faster than expected,” the mayor said. “We ended up with more snow on the ground in the morning rush than original projections.” He noted that road crews were at work early on the snow, and “we were convinced that kids could get to school this morning.”

De Blasio said schools have been closed only 11 times since 1978.