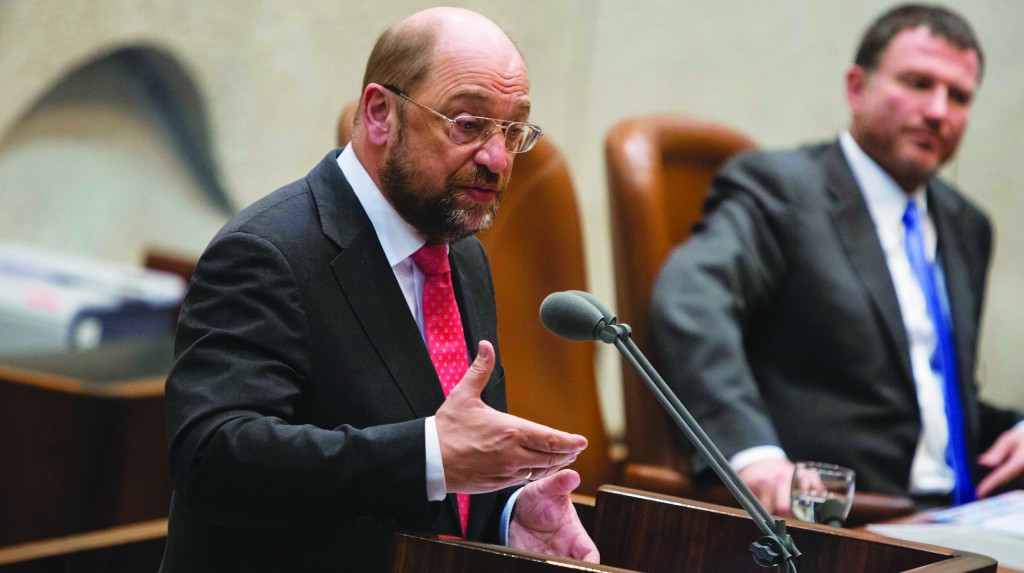 Economy Minister Naftali Bennett led a walkout on European Parliament President Martin Schulz during his speech on Wednesday in the Knesset, accusing the latter of lying about Israeli treatment of the Palestinians.

Bennett demanded that the EU official “take back his lies,” and called upon Prime Minister Binyamin Netanyahu to make the same demand. Other members of the Jewish Home party, of which Bennett is chairman, followed him out of the plenum.

“When he said Palestinians get 17 liters of water for every 70 Israelis get, it was a total lie. It’s preposterous,” Bennett told The Jerusalem Post afterwards. “I remained quiet at first, but then he criticized the Israeli blockade on Gaza and said it caused pain to the Gazans.”

“I won’t sit in the Knesset and hear a European, certainly not a German, saying such things,” he added.

Later on Wednesday, Netanyahu said Schulz “suffers from the same selective listening as many Europeans” in repeating a false Palestinian claim. “Even the Palestinian Water Authority says the discrepancy is much smaller,” he said.

“Schulz admitted that he didn’t check if what he said is true, but he still blamed us. People accept any attack on Israel without checking it. They plug their ears,” Netanyahu said in the plenum.

Schulz’s exact words were: “A young Palestinian asked me why Israelis can use 70 liters of water and Palestinians only 17. I didn’t check the data. I’m asking you if it’s right.”

Schulz appeared unflustered by the walkout, remarking to Knesset Speaker Yuli Edelstein that the Knesset is quiet compared to the European Parliament, and that he would have been disappointed if there wasn’t a reaction to his speech.

After Schulz left, Culture Minister Limor Livnat (Likud) took the podium to say his words were “a vulgar lie.”

“Schulz told lies in German, and it’s unfortunate someone can speak German in this house, but it is our responsibility to stand up against it,” Pensioners’ Affairs Minister Uri Orbach said. “The generation of Schulz’s parents and the generation of the Arab MKs’ parents collaborated to destroy the Jews.”

In his speech, Schulz called for “painful concessions” for peace, saying “a new window of hope is open” thanks to Secretary of State John Kerry’s efforts. He called for a halt to construction over the Green Line, calling them an obstacle to a solution.

Regarding Gaza, Schulz said: “We all know the blockade is a reaction to attacks on your civilian population, but it led to a difficult situation. The results of the blockade are exploited by extremists, so perhaps it is counterproductive to security.”

However, he offered reassurance on the possibility of the EU joining the boycott against Israel: “There is no boycott and no boycott is under consideration. I believe we need to cooperate,” Schulz said, though he has acknowledged an ongoing debate in Europe about labeling products produced in Yehudah and Shomron.

“My personal view is that a boycott is not a solution for anything,” Schulz said. “And therefore, as president of the European parliament I was strongly in favor, for example, of upgrading the scientific cooperation between the European Union and Israel.”

Speaking on the Holocaust, the German EU leader said that his generation has the responsibility to make sure the atrocities perpetrated by his country to the Jewish people will never happen again. Schulz also condemned anti-Semitism in Europe.

He expressed his appreciation to the Knesset members for allowing him to speak in German.

Jewish Home was reprimanded by MKs on the left.

“I want to remind [them] that, despite their efforts, we still live in a democratic country where we can and should hear criticism in any language. Using the Holocaust to not deal with international criticism is ridiculous,” Meretz leader Zehava Gal-On said.

Labor MK Merav Michaeli observed that while the Jewish Home party refuses to hear criticism in German, they’re happy for the IDF to get submarines from Germany.

MK Itzik Shmuli of Labor filed a complaint to the Knesset ethics committee, saying the walkout was “in contempt of the Knesset.”