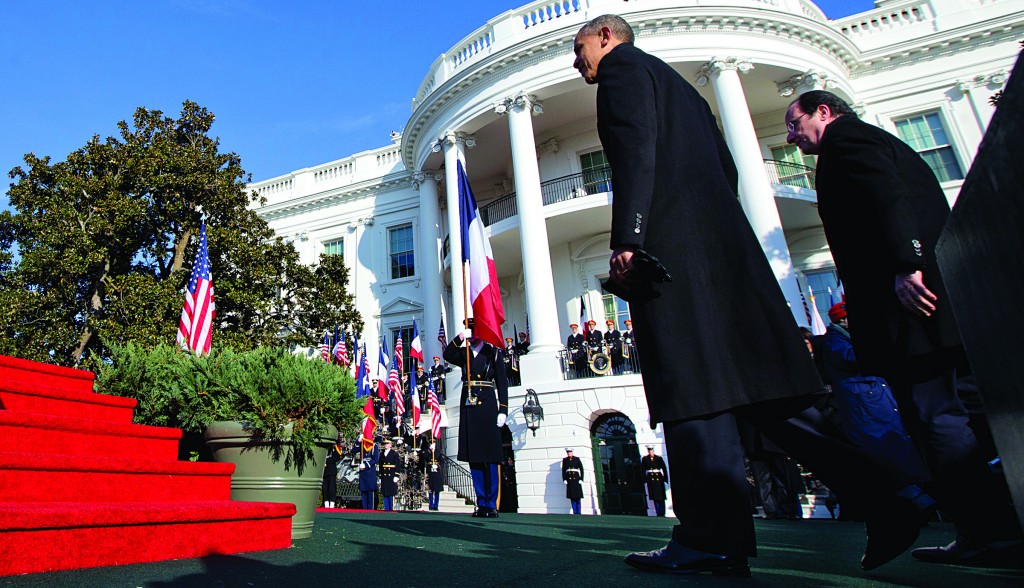 Juggling a pair of tenuous diplomatic efforts, President Barack Obama on Tuesday vowed to come down like “a ton of bricks” on businesses that violate Iranian sanctions while nuclear negotiations are underway. He also conceded “enormous frustration” with stalled Syrian peace talks and offered little hope of ending the conflict soon.

Obama spoke during a joint White House news conference with French President Francois Hollande, a key partner on both Syria and Iran. The leaders have aimed to project a united front on the two matters, but a trip to Tehran last week by French executives has irked U.S. officials who are seeking to tamp down the notion that a temporary easing of sanctions opened Iran up for business.

In a blistering warning, Obama said companies exploring economic opportunities in Iran “do so at their own peril right now because we will come down on them like a ton of bricks.”

Hollande sought to distance himself from the executives’ trip, saying through a translator that the French business community is “very much aware of this situation.”

The president and first lady Michelle Obama, along with a military honor guard, greeted Hollande during an arrival ceremony Tuesday morning on the South Lawn. And the Obamas were to fete Hollande during an opulent state dinner that night.

The Syrian government and opposition groups have been holding peace talks in Geneva, but the discussions have made little progress. The president said he keeps open the option of using force against Syria but added that “right now, we don’t think there’s a military solution.”

The U.S. came close to launching a strike against Syria after a chemical weapons attack there last year, an effort France was ready to join. Both countries pulled back after Russia helped negotiate a deal to strip Syria of its chemical weapons stockpiles.

The leaders also faced questions about U.S. government spying, which has spurred anger in France and elsewhere across Europe. Hollande said that he and Obama had “clarified” the situation and that “mutual trust has been restored.”

“That mutual trust must be based on respect for each other’s country but also based on protection, protection of private life, of personal data, the fact that any individual, in spite of technological progress, can be sure that he’s not being spied on,” Hollande said. “These are principles that unite us.”

Hollande’s comments underscored a central purpose of the trip for both the U.S. and France: projecting a renewed relationship between the allies. The partnership hit a low point about a decade ago when France staunchly opposed the U.S-led war in Iraq, but relations have been improving in recent years.