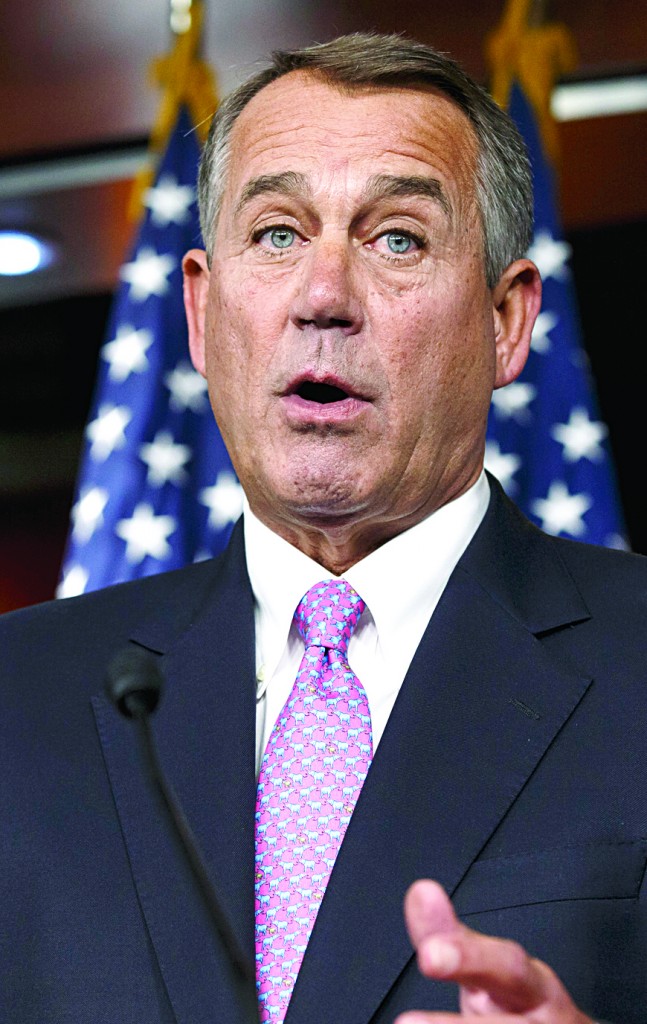 House Republicans backed away from a battle over the government’s debt cap Tuesday and permitted President Obama’s Democratic allies to pass a measure to increase the government’s borrowing cap without any concessions from the White House. The 221-201 vote came hours after Speaker John Boehner announced that his party would relent.

Just 28 Republicans voted for the measure, including Boehner. But 193 Democrats more than compensated for the low support among Republicans.

The move came after most Republicans in the House made clear they had no taste for another high-stakes fight with President Obama over the nation’s debt ceiling, which must be raised so the government can borrow money to pay all of its bills.

The bill would permit the Treasury Department to borrow normally for another 13 months, diffusing the chance of a debt crisis well past the November elections and providing time for a newly elected Congress to decide how to handle the issue.

Just Monday, Republicans suggested pairing the measure with legislation to roll back a recent cut in the inflation adjustment of pension benefits for working age military retirees. Democrats insisted on a debt measure clean of unrelated legislation.

“The full faith and credit [of the United States] should be unquestioned and it is not negotiable,” said House Minority Leader Nancy Pelosi (D-Calif.).

Tuesday’s developments mark a reversal of the GOP’s strategy of trying to use the debt limit to force spending cuts or other concessions on Obama. The president yielded to such demands in 2011 — before his re-election — but has since boxed in Republicans by refusing to negotiate. 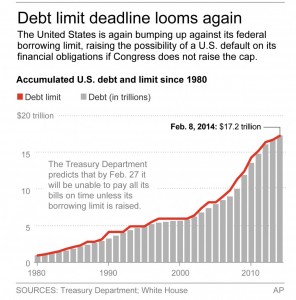 “I am disappointed that Democrats have walked away from the table,” said Dave Camp  (R-Mich.), chairman of the Ways and Means Committee. “But as disappointed as I am, I cannot in good conscience let the Democrats’ refusal to engage, lead to a default.”

Boehner (R-Ohio) made the announcement after conservatives failed to rally around his latest plan, floated Monday, to tie lifting the debt ceiling to a measure to reverse cuts to military pensions that were enacted less than two months ago.

The measure does not raise the debt limit by a set amount, but would suspend it through March 15, 2015, to allow Treasury to borrow the money it needs to pay bills like Social Security benefits, payments on government debt, and checks for federal workers.

The move reflects a return to the old ways of handling the politically tricky debt ceiling vote in which the president’s party is expected to carry most of the load to pass it.

“We’ll let the Democrats put the votes up,” the speaker said. “We’ll put a minimum number of [GOP] votes up to get it passed.”

“That’s how it’s supposed to work,” said Vice President Joe Biden at the Capitol after swearing in the newest senator, John Walsh (D-Mont.).

Boehner said his inability to assemble 218 GOP votes for any debt limit plan left him no alternative but to turn to Democrats.

“When you don’t have 218 votes, you have nothing,” Boehner said. “We’ve seen that before and we see it again.”

The White House applauded the move. Gene Sperling, director of the White House’s National Economic Council, said the administration hopes Tuesday’s development means “that the tactic of threatening default or threatening the full faith and credit of the United States for budget debates is over, off the table and never is going to happen again. And if so that would, I think, be a boost for confidence and investment in the U.S.”

Obama’s refusal to negotiate, GOP disunity, and Boehner’s determination to avoid the possibility of a default on U.S. obligations gave the Ohio Republican little choice but to announce the vote on a “clean” debt ceiling increase.

The announcement amounted to resigned defeat for the GOP.

“The Democrats got burned when we negotiated and that led to the sequester, and we learned our lesson,” said Rep. Peter Welch (D-Vt.). “And the Republicans got burned when they shut the government down.”

The House voted 326-90 Tuesday on separate legislation to restore full cost-of-living increases that were to have been cut by 1 percent for retirees under 62. The cuts, which had just passed in December, were backed by House Budget Committee Chairman Paul Ryan (R-Wis.). Repealing them would cost $7 billion over the coming decade, the Congressional Budget Office said Monday.

The reduction caused an uproar among advocates for veterans, and lawmakers in both parties are scrambling to repeal it.