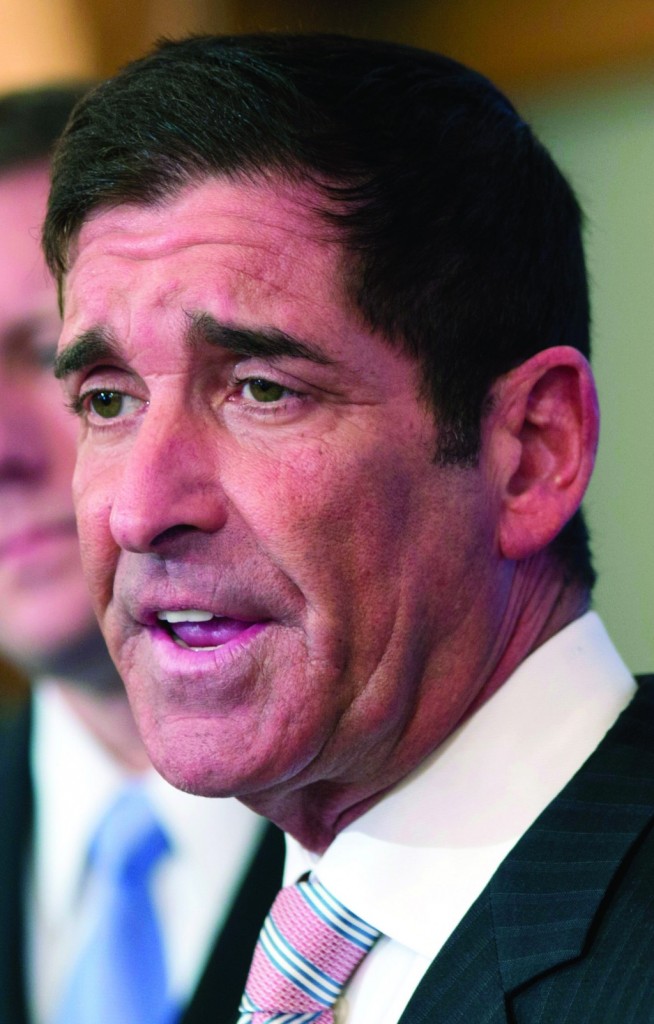 A day after receiving a stinging rebuke from a powerful Albany lawmaker who threatened to block his prekindergarten tax hike plan, New York City Mayor Bill de Blasio demanded a vote while coordinating a show of force to defend his signature proposal that now appears to be in jeopardy.

De Blasio rallied with dozens of influential African American clergy leaders, including Al Sharpton, in Brooklyn, while his close ally Melissa Mark-Viverito, the city council speaker, did the same with local elected officials and parents at City Hall, all urging state lawmakers to consider the plan.

Their demands came a day after Republican State Senate leader Dean Skelos said he would not bring de Blasio’s proposal, a tax hike on the wealthy to fund universal prekindergarten, to a vote. The plan, which is the centerpiece of de Blasio’s first months in office, can’t be enacted without approval from the Legislature.

“People of this city demanded something for our children and we’re told we don’t even get a vote in Albany, as if our children don’t matter,” said de Blasio, likening the city to a “colony that doesn’t even get to decide its own future.”

He and Sharpton led the crowd in a chant of “We want a vote! We want a vote!” The mayor’s wife, Chirlane McCray, who is African-American, also implored the clergy to rally their own congregations, saying that access to prekindergarten was “the defining civil rights issue of our day.”

De Blasio repeatedly pointed to his margin of victory — he captured 73 percent of the vote in November’s general election — as a mandate for his plan. He has spent enormous political capital on the proposal and has personally lobbied lawmakers, including Skelos, on the plan. But now it is in jeopardy of becoming the latest in a long line of New York City mayoral initiatives — like Michael Bloomberg’s 2008 idea to charge drivers who bring their cars into Manhattan — to be cast aside in Albany.

“I am miffed because I had spoken with Senator Skelos several times and understood there would be ongoing discussions to see if we could work forward,” de Blasio said. “This was quite a surprise to me that he would not allow a vote.”

De Blasio, Sharpton and Mark-Viverito said they would lobby the four men who have the power to save the plan: Skelos, his co-Senate leader Democrat Jeff Klein, Assembly Speaker Shelley Silver and Gov. Andrew Cuomo.

Only Silver has clearly backed de Blasio’s plan. Cuomo has made clear that he has no interest in raising taxes. Klein had signaled support for the plan but appeared to soften his stance Tuesday, saying “I’m not sure” when asked if a tax hike was the only reliable method to pay for the plan.

De Blasio may have also been dealt another blow in Albany. In his State of the City speech Monday, he advocated a minimum wage higher than the $9 an hour rate Cuomo pledged to deliver by the end of 2015.

“We don’t want to have different cities with different rates competing amongst themselves,” Cuomo said in a radio interview. “This could be a chaotic situation.”

The dual setbacks came just a day before de Blasio delivers his first budget address and is expected to outline the fiscal challenges facing the city because of impending contract negotiations with all 150 municipal unions.