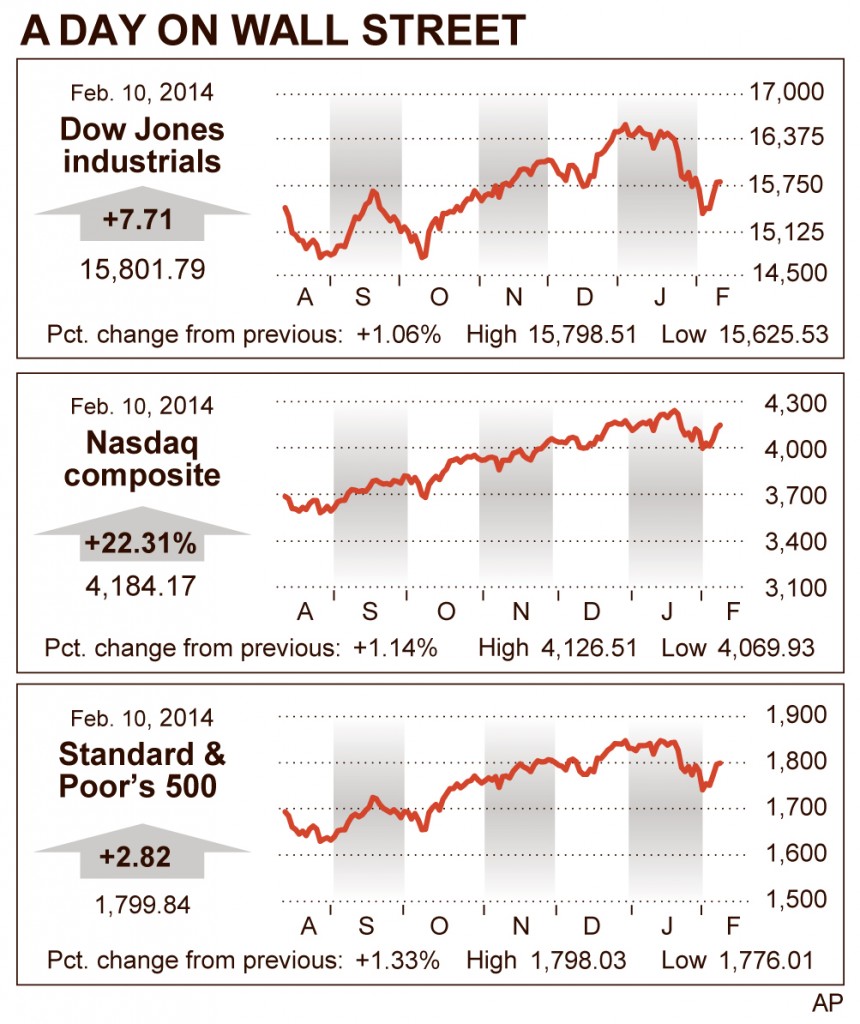 The stock market ended up more or less where it began Monday in a quiet day for investors who had little economic data or company earnings to react to.

Analysts said the market is likely to remain in a holding pattern until traders hear from Janet Yellen in her first testimony before Congress since becoming head of the Federal Reserve.

After spending most of the day lower, the Dow Jones Industrial Average turned slightly higher in late trading and closed up 7.71 points, or 0.1 percent, at 15,801.79.

The tech-heavy Nasdaq was pushed higher by Apple, which rose $9.31, or 2 percent, to $528.99. Apple rose after the activist investor Carl Icahn said he has dropped his shareholder proposal to force Apple to increase its stock buybacks. Apple recently disclosed it had bought $14 billion of its own stock.

Yellen, who started her term as head of the central bank this month, is scheduled to testify before Congress on Tuesday and Wednesday. Yellen’s comments will be closely watched, especially after recent disappointing economic news and the Fed’s decision to further reduce its monthly bond purchases.

Despite recent volatility in the market, investors believe that Yellen will likely continue her predecessor’s plan to continue winding down the Fed’s economic stimulus program. Last week, the Fed cut its bond purchases to $65 billion a month.

“We should expect more volatility as the Fed transitions away from its [economic stimulus plan],” said Doug Cote, chief investment strategist at ING Investment Management.

Investors got a respite from a recent deluge of earnings and economic reports. Wall Street remains in the middle of earnings season, when the bulk of the nation’s publicly traded companies report their quarterly results. Only two out of the 55 companies announcing this week reported their results Monday: the toy maker Hasbro and the industrial conglomerate Loews Corp.

Hasbro rose $2.27, or 5 percent, to $52.36. Hasbro’s said its fourth-quarter profits fell from a year ago, due to a slow holiday season, but it also boosted its dividend and issued a bright outlook for 2014.

Loews, which owns a variety of businesses including insurance, oil drilling and hotels and resorts, fell $1.92, or 4 percent, to $43.26. The company reported a loss of 51 cents a share, due to some one-time charges tied to its ownership of insurance company CNA Financial.

So far this quarter, 344 members of the S&P 500 index have reported their results. While the earnings results have been solid — up 8.1 percent from a year ago, according to FactSet — many companies have been lowering their forecasts for 2014. Fifty-seven companies have cut their forecasts for 2014, while only 14 have raised them, according to Factset.

“The guidance for the upcoming quarters has not been good at all,” said Sam Stovall, chief equity strategist with S&P Capital IQ.

Stocks are also coming off of a strong finish last week.

The Dow rose 188 points on Thursday and 166 points on Friday. The market rallied Friday despite a government report that U.S. employers added just 113,000 jobs in January, fewer than economists were anticipating.

Trading volume was lighter than normal due to the lack of economic data and company news. Roughly 3.3 billion shares were traded on the New York Stock Exchange, slightly below the recent average of 3.4 billion shares.