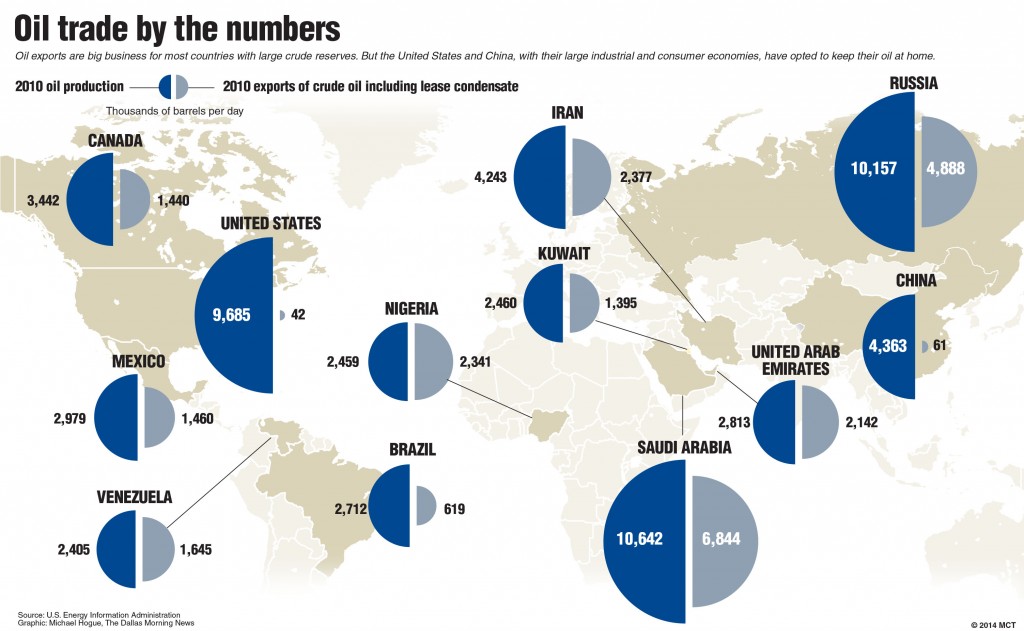 In January, famed energy investor T. Boone Pickens made noise at a natural gas conference in Houston when he said he wasn’t all that “keen” on lifting the U.S. ban on exporting crude oil right now.

Soon his phone began ringing with calls from the oil industry, including Pioneer Natural Resources CEO Scott Sheffield. And Pickens explained that his larger point was that the United States needed to develop a strategic policy to get off Middle East oil.

The flap over Pickens’ comment comes as the oil industry works to rally support around lifting a 40-year-old federal ban on the export of crude oil. But the geopolitical and economic ramifications for such a move are proving divisive in a sector that has been upended by the shale drilling boom.

American crude now sells at a discount because of a massive surge in production in Texas and North Dakota. And if the export ban were lifted and drillers could sell on the global market, American crude prices would rise, many believe.

A number of oil refiners are pushing back against lifting the ban on the grounds it will drive up not just their costs but motorists’ as well.

“It’s one piece of a much larger U.S. energy policy,” said Mike Jennings, CEO of Dallas-based refiner HollyFrontier. “Our company understands the need for open commerce in creating wealth. We believe in free trade. But let’s not make one piece free and still have heavy regulation on other facets.”

Lining up against Texas refiners are the giants of the oil sector. Late last year, Exxon Mobil and the American Petroleum Institute, a trade group for the oil industry, came out in support of lifting the ban on the grounds that drillers in the U.S. were at a disadvantage to those operating in foreign countries. Even the trade group American Fuel and Petrochemical Manufacturers, which represents refineries, said it does not oppose opening up crude exports.

In the past two years, U.S. daily oil production has been increasing by almost a million barrels a year. If that trend continues and Middle East production increases, oil prices would fall near $80 a barrel by the end of 2015, analysts predict.

Sheffield, in an interview last week, said the ban put American drillers at an even greater disadvantage and could potentially decimate the nation’s booming oil business.

“Right now, we have around 1,400 rigs in the shale when you add up all the plays,” he said. “If oil gets below $80, you’ll start seeing those rig counts drop, and then you have layoffs and people out of work, and then, all of a sudden, you start importing foreign crude again from the Middle East.”

The export ban dates to 1973, the same year as the Arab oil embargo. The argument then was that the U.S. needed to protect its energy supply from turmoil in the Middle East.

The debate over its potential demise is a strange twist for an industry that traditionally moves in unison. But as the paradigms of oil and gas change, some of the old allegiances have gone out the window.

Michael Webber, deputy director of the University of Texas Energy Institute, points to a similar argument waged by the petrochemical industry over the export of liquefied natural gas.

“I like to call it a four-way cage match. Producers on one side and consumers, like the chemical companies and refiners and we the public, on the other. It’s tough for the environmentalists. They do want energy prices to go higher, but do they want to be in bed with the oil companies? And then there’s the hawks. They want to keep the supply domestic. But depressing world oil prices would hurt Middle East countries,” he said. “No one really knows what to make of this whole new world.”

Perhaps nowhere are the stakes clearer – and higher – than in the refining sector in Texas and Oklahoma. The last large-scale U.S. refinery opened in 1977, and the industry had been contending with thin margins on gasoline and other petroleum products for years.

But that changed in 2012, when the price of the American and European benchmark crudes, which usually traded within $1 or $2 of each other, diverged by as much as $28 a barrel. The split has since shrunk to around $10. But it is still a cash cow for refineries in the Midwest and Texas that can buy oil at a discount and sell gasoline and other products at the same price as competitors buying crude at European prices.

For the first time in years, refiners, including HollyFrontier and Marathon, are expanding and upgrading their plants.

“It’s the export market. The U.S. has become, even with our capacity constraints, the world’s largest oil product exporter on a gross basis,” said John Grimes, managing director with the investment banking firm Duff & Phelps. “The projections out to 2018 show increased investment in a wide variety of downstream assets.”

Already, plans are underway among oil producers to begin a public relations campaign aimed at convincing Congress and the White House that opening up oil exports is good for the American economy.

One of the issues they plan to home in on is national security, something their opponents are also latching onto. The message from producers, as Sheffield puts it, would be a decline in the U.S. oil industry means more imports from the Middle East and “sending troops to the Middle East for the next 100 years.”

Such arguments have been drivers of American energy policy for decades, said Guy Caruso, former head of the U.S. Energy Information Administration and now an adviser with the think tank Center for Strategic and International Studies.

“It’s a crazy patchwork of things that have kept this market from being efficient,” he said. “The export ban was based on the mindset that we’re in a resource scarcity situation with rapidly increasing demand and supply from an unreliable source in the Middle East. … It’s only now people are starting to think we aren’t a resource-scarce country.”

ISSUE AT A GLANCE:

In 1973, the year of the Arab oil embargo, the United States amended the Mineral Lease Act to restrict the export of U.S. oil abroad.

The drilling industry is arguing to end the ban on the grounds it is depressing the price of U.S. crude. But some refineries, which stand to lose profit if the ban is lifted, are pushing back.