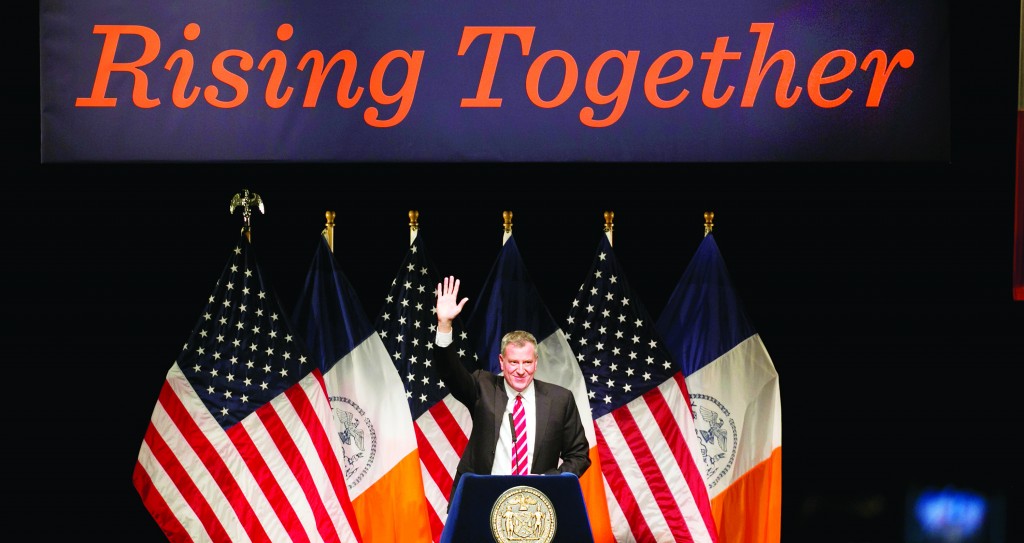 New York City Mayor Bill de Blasio used his first State of the City address Monday to press government to marshal its power to battle income inequality, a liberal call to action that will be closely watched around the nation.

By virtue of a campaign focused on income disparity and a  landslide win that installed him at the helm of the nation’s largest city, de Blasio has become a leading spokesman for a growing movement to narrow the gap between the haves and have-nots.

He promises to help by hiking taxes on the rich to pay for prekindergarten, raising the minimum wage and providing ID cards for people in the country illegally.

“We’re fighting to give everyone a fair shot,” he said Monday during the speech at a community college, “so that city government doesn’t set its priorities by the needs of those at the very top … while ignoring the struggle of those born under a less lucky star.”

The first Democrat to deliver the address in more than 20 years, de Blasio unveiled a decidedly left-leaning agenda. His signature issue, to which he devoted the climax of his speech, was to again call for a tax hike on New Yorkers making more than $500,000 a year to pay for universal prekindergarten.

“Many wealthy New Yorkers … know that a gilded city isn’t the New York they signed up for, even if they currently find themselves doing quite well,” de Blasio said. “Raising taxes on the rich makes our commitment to our kids more than just words.”

The plan, welcomed in the city’s liberal circles, has run into obstacles. De Blasio can’t raise taxes without approval from state lawmakers, and Gov. Andrew Cuomo has steadfastly refused to consider the issue, instead offering to dedicate existing money in the state budget to pay for the program. And on Monday, even as de Blasio spoke, State Senate Republican Leader Dean Skelos told reporters that he would not allow legislation containing a tax hike on city residents to advance.

But prekindergarten is not the only front on which de Blasio is pressing state lawmakers in the capital of Albany. He revealed in the speech that he plans to ask them next week for the power to raise the minimum wage in the city.

“We will send a powerful signal to the people of New York that we honor work and that we are committed to making work pay,” he said.

De Blasio, who did not specify what he wanted the new minimum to be, joined a national push to raise minimum wage levels. Last month, President Barack Obama called for the federal wage to be raised from $7.25 to $10. And Cuomo and lawmakers reached a deal last year to raise New York’s minimum wage to $9 by the end of next year.

De Blasio, who expects nearly lockstep cooperation from the Democrat-controlled City Council, also said he wants to expand existing living wage legislation and wanted municipal ID card to be available to all residents this year regardless of their immigration status.

“To all of my fellow New Yorkers who are undocumented, I say: New York City is your home too, and we will not force any of our residents to live their lives in the shadows,” the mayor said.

But mayors can hardly defeat inequality on their own. Many of the forces widening the income gap between the richest and the rest are global in scope, and world leaders including Obama and Pope Francis have warned in recent months that the current stratification must be solved. Moreover, liberals across the nation will monitor de Blasio’s successes and failures as the Democratic Party appears to be shifting to the left in advance of the 2016 presidential election.

De Blasio, whose 43-minute speech was peppered with nods to famed Democratic former Mayor Fiorello LaGuardia, whose granddaughter introduced the mayor, largely steered clear of new proposals, outside of a few job creation ideas. He also only gave passing mentions to public safety, a topic that dominated previous mayors’ speeches.

Reactions to the speech from de Blasio’s allies in local government — Comptroller Scott Stringer, Public Advocate Letitia James and City Council Speaker Melissa Mark-Viverito, all Democrats — were glowing and spoke of ushering in a new liberal age for the city.

But de Blasio’s lofty rhetoric may take a backseat to the details of governing as soon as later this week: On Wednesday, he will deliver his first budget presentation and is expected to outline the stark fiscal challenges the city faces due to impending contract negotiations with all 150 municipal unions, which could cost the city billions of dollars.