Turkey’s state-run agency says a court in Istanbul has formally arrested a Ukrainian man who allegedly tried to hijack a Turkey-bound flight to Sochi, Russia, as the Winter Olympics were beginning.

Private NTV media said he was arrested on hijacking and hostage-taking charges.

The man claimed he had a bomb and tried to divert the Pegasus Airlines flight, which originated in Kharkiv, Ukraine, on Friday. The pilot tricked him and landed in Istanbul instead, where he was subdued by security officers who sneaked on board.

Ukrainian officials said he tried to hijack the plane to press for the release of anti-government protesters in his country. 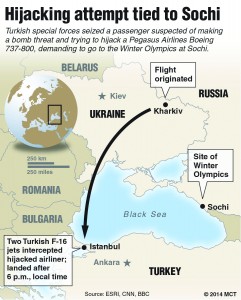 This article appeared in print on page 3 of the February 10th, 2014 edition of Hamodia.