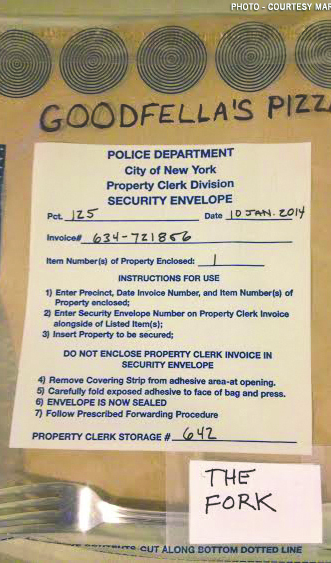 A fork that Mayor Bill de Blasio famously used to eat pizza at a Staten Island diner is on auction, with bidding by Sunday afternoon at $2,500.

A retired NYPD sergeant preserved the utensil from the pizzeria in a police evidence bag. Proceeds from the sale will benefit the Stephen Siller Tunnel to Towers Foundation, which assists first responders and wounded warriors.

“Mayor de Blasio is being a big sport about this,” John Hodge told amNewYork.

De Blasio’s use of a utensil on Jan. 10 to eat pizza was the subject of mass mock outrage among new Yorkers, who insisted that pizza was to be eaten by hand only. The mayor responded that it was his Italian background that brought out his “metal.”