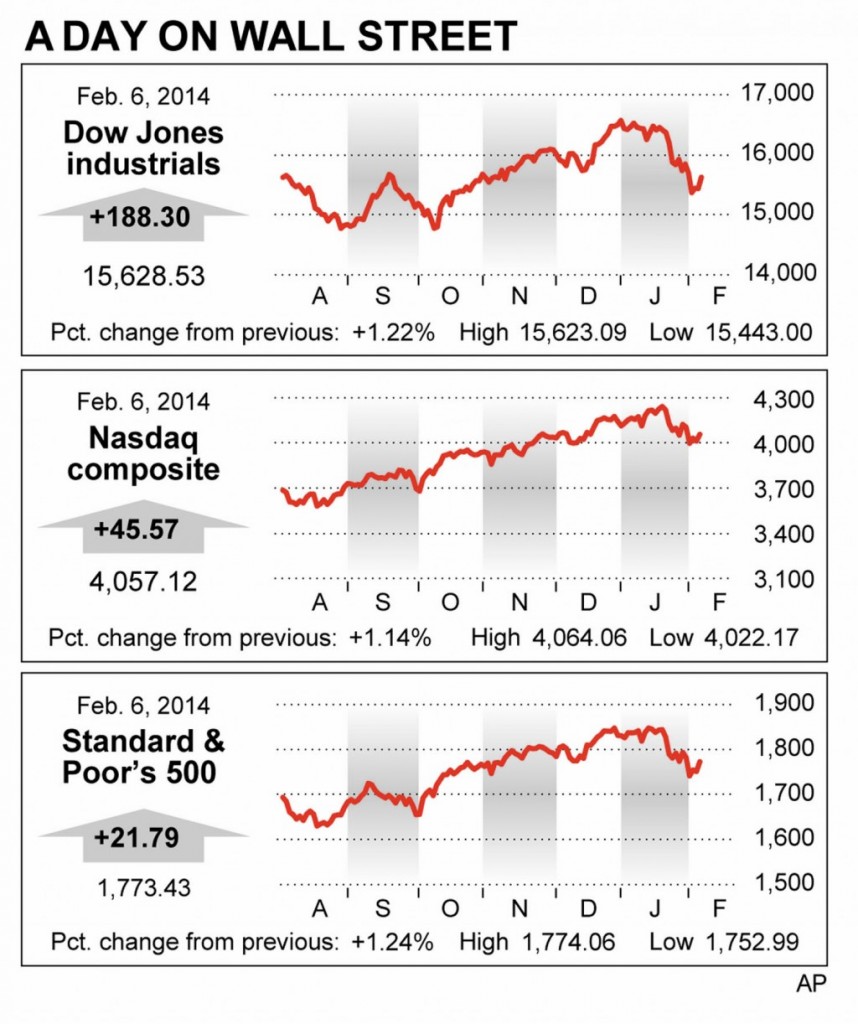 After a rocky start to the week, U.S. stocks roared back on Thursday, giving major stock indexes their biggest gain of the year.

The Dow Jones industrial average and the S&P 500 index each closed up 1.2 percent, their largest single-day increase since Dec. 18.

Then the markets got a dose of good news on the U.S. job market. The Labor Department reported that fewer people applied for unemployment benefits last week.

That report, combined with a private survey on U.S. hiring released Wednesday, appeared to bolster investors’ confidence that the government will issue a positive January jobs report on Friday.

All week, investors have been looking ahead to the employment survey and what it will augur for the economy.

Evidence of healthy U.S. job growth would suggest that the world’s biggest economy is still expanding at a solid pace. That would comfort investors, many of whom became uneasy in recent weeks after signs of weaker global growth emerged.

Those concerns were seen by some other investors as a buying opportunity.

Thursday’s gains were broad. All 10 of the S&P 500’s sectors rose. Three stocks rose for every one that fell.

Stock buyers got going early on, reacting to better-than-expected earnings late Wednesday from The Walt Disney Co. The stock rose $3.80, or 5.3 percent, to $75.56.

Investors also cheered Dunkin’ Brands Group, which reported that more people visited stores owned by the chain restaurant in the last quarter and spent more there once they got inside. The stock added $1.59, or 3.4 percent, to $48.89.

Other stocks didn’t fare as well.

Twitter’s first earnings report since becoming a public company stirred concerns that growth is slowing at the online messaging service. The stock lost $15.94, or 24.2 percent, to $50.03.

A couple of energy companies were among the biggest decliners in the S&P 500.

Investors had moved money into bonds in recent weeks on concern that U.S. growth is slowing. That trend continued to do a gradual reversal on Thursday.

The yield on the 10-year Treasury note ticked up to 2.70 percent from 2.67 percent on Wednesday. The yield, which affects rates on mortgages and other consumer loans, had fallen to 2.58 percent on Monday, the lowest in more than two months.

All told, major indexes gained a little bit of the ground lost since Monday, when the Dow sank 326 points as disappointing news about U.S. manufacturing unnerved investors.

How Wall Street interprets Friday’s employment report will determine whether the market will continue rebounding from Monday’s losses.

In December, the economy added a disappointing 74,000 jobs. That was the fewest in three years and far below the average of 214,000 added in the previous four months.

The Labor Department said Thursday that the number of people applying for U.S. unemployment benefits declined 20,000 last week to 331,000. That suggests Americans are facing fewer layoffs and better job prospects.

“We do think that a little bit of a pause in the market was absolutely due and at hand as we finished 2013, so we think much of that has occurred,” said Jim Russell, senior equity strategist at U.S. Bank Wealth Management. “If tomorrow’s numbers come in weak, you can blame the weather. If they come in a little stronger, of course that’s what we want.”