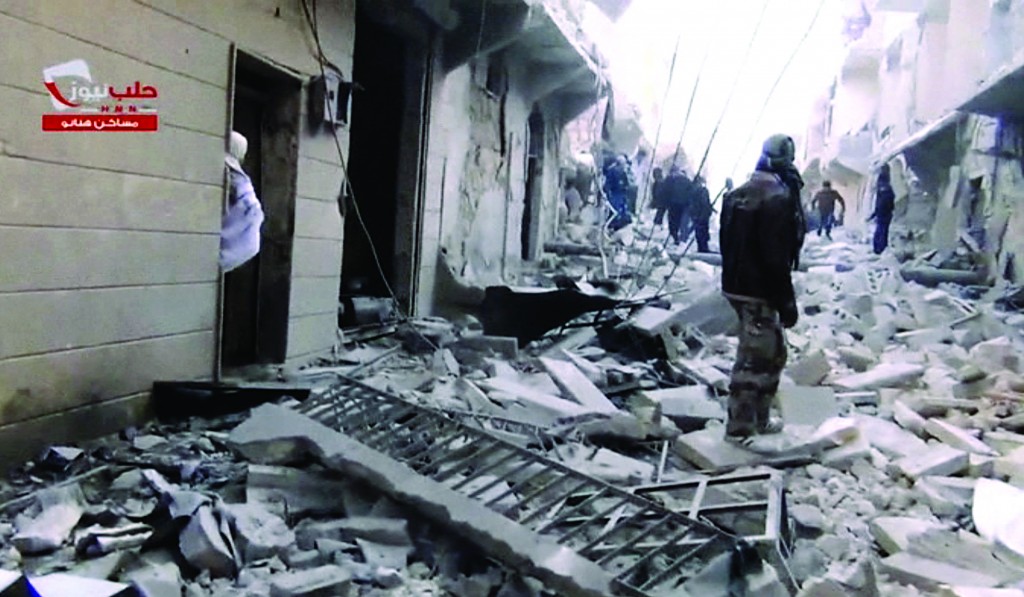 A suicide bomber blew himself up at the gates of a Syrian prison Thursday and rebels stormed in behind him, freeing hundreds of inmates as part of an offensive aimed at capturing key government symbols around the northern city of Aleppo.

Government forces, meanwhile, dropped crude “barrel bombs” in deadly airstrikes as both sides escalated their fight for the strategic city ahead of a second round of peace talks set for next week. Opposition leaders threatened to suspend the talks over the barrel bombings.

In the past six days alone, the makeshift weapons — containers packed with explosives, fuel and scrap metal — have killed more than 250 people in Aleppo, including 73 children, according to the Britain-based Syrian Observatory for Human Rights.

They include at least 11 who died Thursday — six of them from
the same family — in the opposition-held neighborhood of Masaken Hanano.

In other developments, the Syrian government said it has reached an agreement with the United Nations to let hundreds of trapped civilians leave besieged parts of the city of Homs and to permit U.N. humanitarian relief convoys to enter.

State Department spokesman Jen Psaki welcomed the agreement, which is expected to be carried out on Friday, but warned: “We should not be giving credit to a regime just for providing food for a few days to people who are starving, given that’s the right moral thing to do. This is something they should have been doing all along.”

The rebels in Aleppo declared a push to seize the city’s central prison and the Kweiras military air base to the east. Opposition fighters have been trying to capture the installations for months.

Thursday’s offensive began when a Chechen suicide bomber from the al-Qaida-linked Nusra Front attacked the prison gates, according to the Observatory. Rebel fighters then managed to gain control of large parts of the compound. By evening, heavy clashes between the rebels and soldiers were raging inside. The Observatory and other activists said the rebels freed several hundred prisoners.

Rebels have been besieging the prison, estimated to have 4,000 inmates, for almost a year. They have rammed suicide car bombs into the front gates twice, lobbed shells into the compound and battled frequently with the hundreds of guards and troops inside.

The nearly 3-year-old uprising against President Bashar Assad has left more than 130,000 people dead and forced more than 2.3 million to seek refuge abroad.