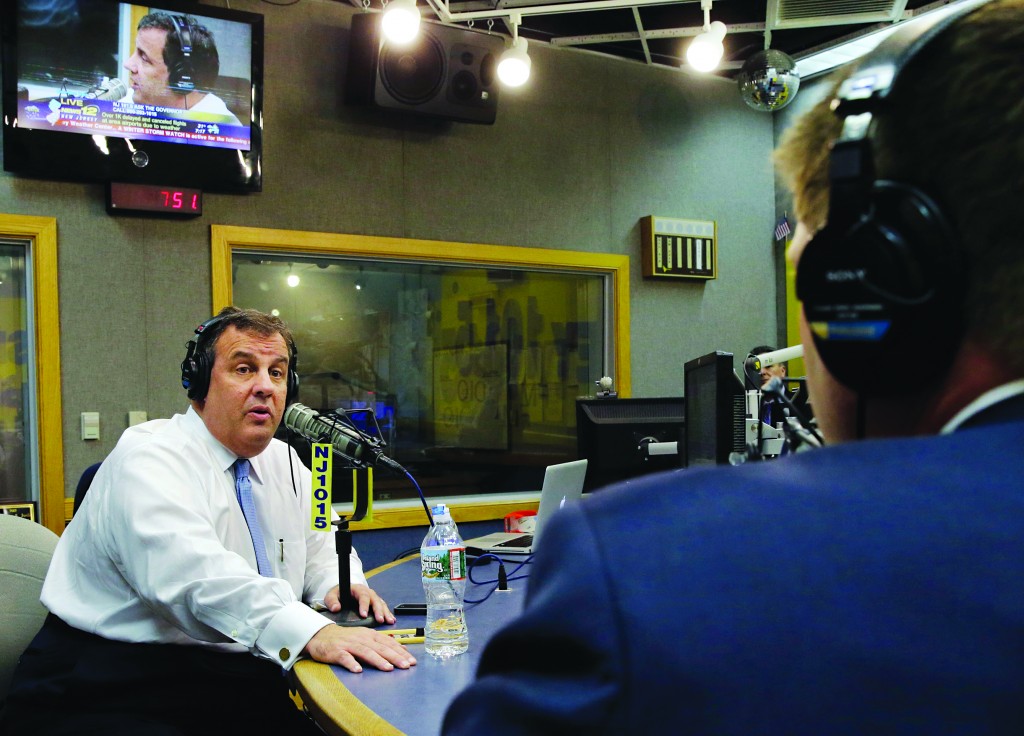 Gov. Chris Christie said he started asking staff members to get more details about traffic jams in the northern New Jersey town of Fort Lee last year soon after they were over and he heard they were a source of contention.

That’s the account he gave Monday night on a radio show when he spoke publicly for the first time in more than three weeks about the political retribution scandal involving lane closures near the George Washington Bridge, which links New Jersey and New York City.

The gravity he now says he gave the issue last September stands in contrast to his account on Dec. 2, when he laughed it off. “Unbeknownst to everybody, I was actually the guy out there. I was in overalls and a hat,” he said then. “I actually was the guy working the cones.”

The scandal has engulfed Christie’s administration and threatens to upend future political ambitions for the Republican governor and possible 2016 presidential candidate.

He came under a new round of scrutiny last week after the lawyer for a former Christie ally wrote a letter saying “evidence exists” that Christie knew about major traffic jams caused by closing lanes approaching the bridge in Fort Lee, a plot said to have been undertaken for political retribution. The lawyer for David Wildstein, who was Christie’s No. 2 man at the Port Authority of New York and New Jersey, which runs the bridge, did not give any other details about the evidence.

Christie’s office initially denied that he knew about the traffic problems until after they were over, pointing to several statements from the governor.

But on TownSquare Media’s “Ask the Governor” on Monday, Christie acknowledged for the first time that he may have been aware of the closures at the time. But he said that if he was, they did not get his attention.

Christie said an email from Patrick Foye, the executive director of the Port Authority, made him realize the traffic gridlock may not have been routine. That email was forwarded to a top Christie aide on Sept. 13, the day Foye hastily ordered the lanes reopened.

“I know prior to [the Foye email] there were press accounts about traffic issues up there, and if I read that or someone said something … it wouldn’t have been meaningful to me because I didn’t know there was any problem up there, because I didn’t know we had actually closed lanes up there before that,” Christie said, dismissing the scrutiny over that detail as “a game of gotcha.”

“Nobody has said I knew about this before it happened, and I think that’s the most important question,” he said.

“I’m the guy giving the governor the benefit of the doubt, and I take him at his word,” Sokolich said. “I’ve said it 100 times, I’m not rooting for the highest elected official in the state of New Jersey to be involved in this. I’m not. But I don’t know, it seems like all sorts of things are happening.

“I’m not a Wildstein fan, I’ve made no secret of that,” Sokolich said. “Anything that emanates from his camp has to be taken with a grain of salt.”

Sokolich said he first heard the tie-ups might have been directed at him on Sept. 9 at 6:30 a.m., when the police chief said, “‘Mayor, I’m hearing this is about you.’ I’m the one who kept saying, ‘No, it can’t be, it can’t be, I’m not important enough.’ I don’t think it’s about Mark Sokolich, per se, although the emails would tell you differently.”

Emails released last month show that on Aug. 13, Christie’s deputy chief of staff at the time, Bridget Anne Kelly, wrote to Wildstein: “Time for some traffic problems in Fort Lee.” Wildstein replied: “Got it.”

Also on the radio appearance, Christie acknowledged that his office received a subpoena from federal criminal investigators. He said he will comply with that one as well as a subpoena from a committee of state lawmakers looking into the scandal.

Monday was the deadline for the 20 subpoenaed people and entities connected to Christie to provide information to the legislative investigators.

The committee said it had received some information but several people and groups received deadline extensions. The co-chairman, Democratic Assemblyman John Wisniewski, said those who asked to produce documents on a rolling basis were being accommodated.

Christie said his office was among those handing over documents over time.

At least two people subpoenaed — former Deputy Chief of Staff Bridget Kelly and former campaign manager Bill Stepien — have said they will not cooperate with the legislative demands to avoid self-incrimination.