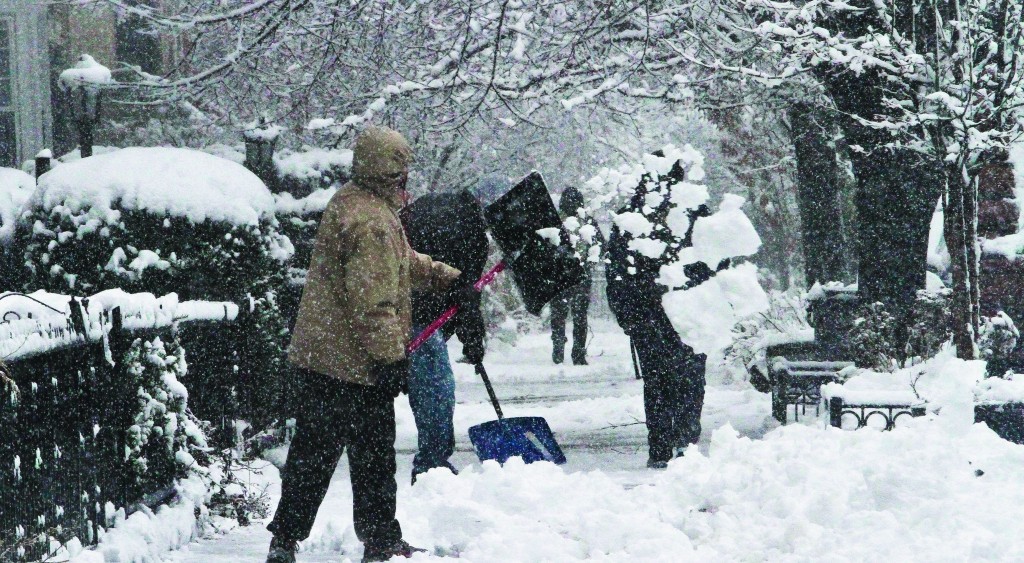 About 8 inches of fat, slippery flakes began falling during the morning commute Monday and continued falling throughout the afternoon in New York City, creating slushy sidewalks and streets.

Criticized after a previous snowstorm left some main arteries unplowed, Mayor Bill de Blasio moved quickly to show he was in charge.

De Blasio said at a noontime press conference that there’s been better coordination among city agencies during this snowstorm. He said that officials “felt very good” about the city’s response to January’s first storm but conceded that it “left something to be desired.”

That prompted a review, he said, which led to a rapid cleanup of Monday’s storm. Trash and recycling collection was cancelled early, freeing up sanitation vehicles for quicker snow removal. The MTA put chains on all its buses. It also has more towing vehicles at the ready in case a bus breaks down, and are considering new routing for snow removal.

Complicating cleanup for Monday’s storm, de Blasio said, was its timing and the makeup of the snow. It “turned on a dime,” he said, falling faster than workers can plow it. And the storm’s arrival time — the morning rush hour — also hampered the plowing operation.

The city has been using 450 salt spreaders along with the 1,500 plows.

Three storms are expected this week — but this one is expected to be the biggest.

In New Jersey, Gov. Chris Christie declared a state of emergency with travel conditions hazardous. Nonessential government employees were dismissed early and scattered power outages were reported throughout the region. By mid-afternoon, the flight-tracking website FlightAware reported more than 3,000 delayed flights and 1,700 canceled flights nationwide. Inbound flights to Newark, LaGuardia and Kennedy airports were delayed one to three hours because of snow and ice.

Another two storms are likely to hit the same region this week, one beginning Tuesday night, bringing a combination of rain, freezing rain and snow, and another over the weekend.

“I like to say Punxsutawney Phil agrees with me,” Gary Szatkowsi, a meteorologist in Mount Holly, N.J., said. “Winter’s not over, that’s for sure.”