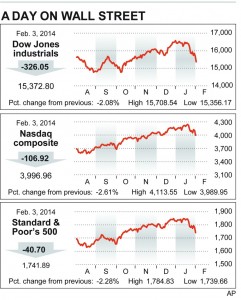 For investors, February is starting out just as rough as January.

U.S. stocks tumbled on Monday, pushing the Dow Jones industrial average down more than 320 points after reports of sluggish U.S growth added to investor worries about the global economy. The slump follows the Dow’s worst January performance since 2009.

The market stumbled from the get-go, with U.S. markets opening lower after declines in European and Japanese indexes. Then it quickly turned into a slide as a spate of discouraging economic data on everything from manufacturing to auto sales to construction spending poured in. By late afternoon, the sell-off accelerated further, bringing the Dow down more than 7 percent for the year. The S&P 500 index was down more than 5 percent on the year.

Some stock watchers took the market’s decline in stride. They considered it a necessary recalibration following the market’s record highs at the end of last year.

“It’s a bit painful for investors to see the equities markets drop as they have, but this is healthy for this market,” said Chris Gaffney, a senior market strategist at EverBank. “We’ve been almost 2-1/2 years without a 10 percent correction. So we’re still in that healthy correction, if you will.”

There were signs of worry throughout the market. The VIX index, a measure of stock market volatility, rose to its highest level since December 2012. Investors shifted into U.S. government bonds, pushing yields lower and continuing their sharp decline since the start of the year.

Staffing company Robert Half International fell the most among stocks in the S&P 500 index. CarMax and Pfizer were among the few stocks to eke out gains on the day.

Ford shares slipped 41 cents, or 2.7 percent, to $14.55 and General Motors shares fell 83 cents, or 2.3 percent, to $35.25 after the automakers reported a drop in U.S. January sales, hurt by harsh weather that kept customers away from dealerships.

“Investors had expectations going into 2014 of a much stronger U.S. economic recovery than actually what we’re seeing and we’ve had to reset our expectations,” Gaffney said.

Fresh signs of weakness in China also weighed on the minds of investors.

An official Chinese manufacturing survey released over the weekend showed factory output grew at a slower rate in January compared with December in the world’s second-largest economy. The report released on the weekend followed an HSBC survey that showed an outright contraction in manufacturing.

Investors have been looking for more pullbacks this year and possibly a correction, the technical term for when a stock market index like the S&P 500 falls10 percent or more. Three months ago, analysts at Goldman Sachs said there was roughly a 60 percent chance that a correction would happen this year.

All 10 sectors in the S&P 500 index fell, and telecommunications stocks posted the biggest declines, weighed down by AT&T and Verizon Communications.

Mattel fell $1.79, or 4.7 percent, to $36.05. The world’s largest maker of toys reported on Friday that sales of Barbie and Fisher-Price preschool items dropped in its fourth quarter.

Also among the decliners: Jos. A. Bank Clothiers, which fell $2.83, or 5 percent, to $53.39 on continued doubts that a takeover bid by rival clothier Men’s Wearhouse will go through. The two retailers have been dueling since October when Jos. A. Bank offered $2.3 billion for Men’s Wearhouse.

Pfizer rose 20 cents, or 0.7 percent, to $30.60, after the company reported that a mid-stage study of an experimental drug for an advanced cancer met the main goals. The drug is seen as a potential huge seller. Pfizer was the only stock to rise among the 30 members of the Dow.

This article appeared in print on page 8 of the February 4th, 2014 edition of Hamodia.